Bats, like snakes, are poorly understood. As a result, these tiny winged mammals are feared by many. Much lore surrounding bats has been generated by tropical vampire bats which feed on the blood of livestock, wildlife, and occasionally sleeping humans. Of course, bats are a public health concern because they can carry rabies. Some bats in Minnesota are being killed by a disease called White-nose Syndrome.

General description: Bat species found in Minnesota are very small, weighing from two-tenths of an ounce to slightly over one ounce.

The little brown myotis, our most common bat species, occurs over most of North America. Together with the Northern long-eared bat and big brown bat, it hibernates in Minnesota caves and mines. In summer, they roost in caves, mines, hollow trees, and buildings. Groups of these bats hang upside-down in caves. The Tricolored bat is our smallest species, weighing only two-tenths of an ounce. It is found in the same Minnesota caves and mines, though it is uncommon and almost solitary. 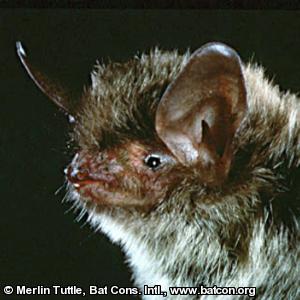 The silver-haired bat is a forest dweller that usually lives near water. It feeds among the trees much like the Eastern red bat, though the latter is noted for its unusual feeding habits. Usually a red bat pair will fly the same route, over and over, in search of food. Another woodland species is the hoary bat. It is the largest Minnesota bat, weighing an ounce or more. In 2016, an individual evening bat was discovered in the state. This represents the first documentation of this bat in Minnesota. All four species are solitary, roost in trees, and migrate south for the winter.

Insectivorous, they feed mostly on flying insects, including beetles, moths, and mosquitoes which they catch in their cupped tail membranes as they dart and weave through the nighttime air. Once an insect is caught, the bat transfers its prey to its mouth while in flight.

All of Minnesota's bat species occur throughout the state, with the exception of evening bat which is known from a single location.

Bats locate insects and dodge obstacles by echo location. As they fly, they constantly emit supersonic cries. Their ears pick up echoes bouncing off objects. These echoes either guide bats toward prey or away from obstacles. Discovery of this unique principle led to development of sonar and radar by which boats and planes navigate, and fishermen locate schools of fish. 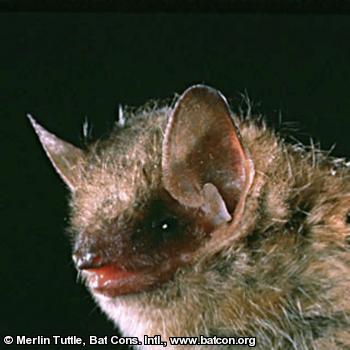