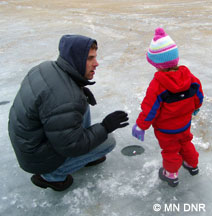 To be perfectly honest, it wasn't even my idea. I hadn't even given it a thought until my 4-year-old daughter broached the subject from the back seat of the car on the way to preschool one morning. She was singing "This Old Man" when she inexplicably stopped between verses 3 and 4 and said "When are we gonna go ice fishing?"

I have become accustomed to the haphazard nature of questions from a four-year-old – "Can we color Easter eggs for Christmas?" "Who delivers stork babies?" "Can we put doll pants on the cat?" etc., but this one was completely out of the blue. I tried to avoid swerving into oncoming traffic as I responded that maybe we could go when the weekend came (I still suspect that her 6-year-old brother put her up to it, but I have no proof).

So, there we were a few days later, up in the morning packing for our first father/child/child ice fishing outing. I told them that we have to only bring along things that were absolutely necessary. They both nodded, scampered off, then returned with an armload of fruit snacks, and a half-eaten bag of marshmallows. I shrugged, packed the items, then heated up some hot chocolate to go with the marshmallows and poured it into a thermos. My wife, who had been looking forward to the morning alone with just the one-year-old, literally pushed us out the door, and we were off.

We arrived at the lake, drove out on the ice, found a nice spot near some ice houses, and parked the truck. A litany of questions began: "Who lives in these houses?" "Why are these houses so small?" "Why are these houses here?" "What are we doing?" Finally it occurred to me – the kids didn't realize that we were actually ON the lake. The ice was covered with snow, and they assumed we were still on land. The concept of driving on the ice was not something they had ever thought of before, and I had neglected to prepare them for it.

When I explained that we were actually ON the lake and that the water and the fish were under us, they gave me the strangest looks. It started with a look of incredulity as if dad had finally gone crazy, then evolved into a look of devilish mischief like we were doing something dangerous that we must never tell mom about.

As if they didn't believe me, they both immediately went to their knees and began feverishly digging away at the thick snow that was concealing the ice. They both discovered the ice at the same time and the rejoicing that followed would have made you think they had struck gold.

I didn't think they could get any more excited, but then I got out the ice auger. I did a quick demonstration to start the first hole, then handed it off to my 6-year-old boy to give it a try. They say that the only sure things in life are death and taxes, but I would like to add one more thing to that list: little boys love ice. They love everything about ice – from sword-fighting with icicles to smashing ice with a hammer to watching the water gush up out of a freshly-drilled ice fishing hole.

Needless to say that my son has a new favorite activity. He was like a little, crazed, John Henry-like robot, drilling hole after hole. Picking up his underwear off the bathroom floor is sheer drudgery for him, but he would have kept drilling holes until St. Patrick's Day if I would have let him.

We put some bait on our hooks, dropped them down the holes, set their depth, and waited. What followed was a demonstration of my children's lack of attention span that was unprecedented and disturbing all at the same time. My wife and I had secretly wagered on how long the kids would stay interested in ice fishing if the fish weren't biting. Neither of us was even close. Our biggest mistake, apparently, had been making our guesses in time increments of minutes, as the amount of time my kids spent focused on ice fishing was, literally, twenty seconds.

I blame the dogs. You see, it was at that exact moment that a pair of young, energetic black labs came running up to us. We didn't know who their owner was, and they clearly didn't care. They bounded in, convinced my kids to join them in their merriment, then all four of them bounded off together like a newly-formed, twelve-legged, interspecies gang, to run amok and create general havoc. As I stayed behind to watch the rods, I glanced up occasionally to monitor their activities. I saw running, wrestling, dog/child scarf tug-of-war, minor tail-pulling and more – they all seemed to be having a great time.

With not even a nibble on the lines, I considered trying a new location, but decided instead to lure my children back with hot chocolate. It worked, and soon we were sitting on the tailgate of the vehicle, sipping hot chocolate through the cracks of swelling marshmallows.

The only thing I could think about as we drove home was how much fun my kids had out on the ice that morning. We pulled into the garage, walked in the door, and the kids were already relaying the events of the morning to my wife before they even had their arms out of their coat sleeves.

They can't wait to go again. Imagine how much fun they'll have when we do catch a fish.

(Oh, and in case you're wondering, stork babies are delivered by squirrels.)