Lake Sturgeon, sometimes called a living dinosaur of the fish world, are a remnant of an ancient and primitive group of fish that have cartilaginous skeletons and bony plates in their skin. Lake Sturgeon are one of three species of sturgeon that live exclusively in freshwater, the other two species are Shovel Nosed Sturgeon (found in Minnesota) and Pallid Sturgeon (Federally listed as an endangered species, not found in Minnesota). There are twenty-seven species of sturgeon worldwide, all of them found in the Northern Hemisphere.

Lake Sturgeon almost disappeared from Minnesota in the early 1900's. During the 1800's sturgeon were considered a nuisance fish because they easily broke through commercial fishing nets. They were taken out of the rivers and lakes they inhabited and stacked on the shorelines like logs; sturgeon were also used to power steam boats because their meat has a high oil content. In the late 1800's sturgeon eggs were recognized as a dining delicacy. They were harvested by the 1000's for their caviar until the population crashed in the early 1900's. This dramatic harvest along with significant habitat changes around the sturgeon's spawning areas nearly drove the entire population in the United States to extinction. Currently Lake Sturgeon are listed as a Species of Special Concern in Minnesota and have strict regulations for harvest.

Sturgeon can easily be identified by the following characteristics:

They forage in areas with sandy, gravelly and muddy bottoms using their snouts to stir up the benthic material and their powerful sucking mouths to draw in the water and floating debris. The small particles of sand and muck are expelled through their gills and the larger food items are consumed.

Around mid-May through June, when water temperatures reach 50 degrees F, sturgeon begin to migrate to their spawning habitat. They spawn in shallow rivers that have clear water and gravel or cobble bottoms free of silt and sand once temperatures reach 55 degrees F. During this time the males arrive before the females and neither forage for food until they leave the spawning grounds. The females, accompanied by two males, lay hundreds of thousands of eggs generally in one or two days and the males fertilize the eggs after they are released from the female. The eggs stick to the rocks and gravel at the bottom of the stream and hatch in about 5-8 days; ideal water temperature for hatching is 59-64 degrees F.

Sturgeon spawning habitat is being threatened by the introduction of zebra mussels. Zebra mussels attach to hard surfaces and can cover rocks in one season leaving no space for sturgeon eggs. Zebra mussels are found throughout the Great Lakes watershed, Mississippi River watershed and have recently been discovered in the Red River & Lake of the Woods watershed.

The freshly hatched sturgeon have a large yolk-sac on their belly and are called sac larva. They settle into the rock crevasses and feed off of their yolk-sac. 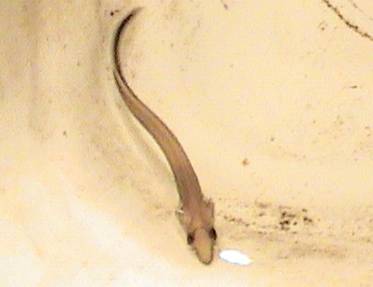 After 10 days the yolk-sac is consumed and the larva are now able to swim up into the river current. They float downstream and settle out in areas with sandy bottoms to feed on burrowing invertebrate larva and other small organisms in the benthic substrate of the river. 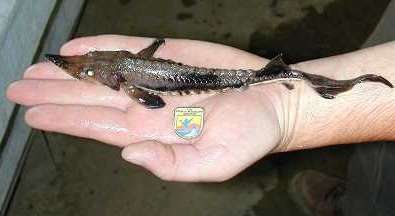 The larva grow rapidly and in about five months they are five to seven inches long and are now fingerlings.

For the next five years the fingerlings continue to forage in the river for larger aquatic invertebrates, freshwater mussels, small snails, and fish. They continue to grow rapidly and by five years old they are now around 20-inches in length and are ready to migrate into larger river and lake systems.

Once sturgeon reach sexual maturity they return to the spawning grounds where they were born. The females spawn once every four to eight years, and the males spawn every one to two years. Males have a shorter life span than females. Generally males live for 65-90 years and females can live over 150 years.

Most predation of sturgeon happens during the egg stage. Sturgeon eggs are vulnerable to predation by larger benthic organisms such as crayfish, and small fish.

Fingerling and small juvenile sturgeon can be predated by herons. By the time sturgeon reach 20 inches or more in length their primary predator is humans.

To learn more about fishing for Lake Sturgeon and how to handle a Lake Sturgeon if you are lucky enough to catch one see our Piers & Places and Fishing Equipment & Tips articles.