Esox lucius : Esox = pike (Latin); lucius = Latin name for this species that may refer to “wolf”

This widely distributed fish is found throughout Minnesota in lakes, ponds and rivers, most often around aquatic vegetation in quiet slow-moving water. It prefers 60-65 degree F water, ranges widely throughout its habitat. They tolerate a range of temperatures and prefer clearer water but can tolerate some turbidity. Other common names are pike, northern, jack, snake pickerel, and hammer handle.

The northern pike is stream-lined - long, slender but muscular, and torpedo-shaped with greenish body coloration on the top and sides, and very light or white coloration on the underside. It has a characteristic duck-billed shaped snout with a large mouth and tongue and palate lined with hundreds of backward-slanting teeth to grip, while long teeth in the lower jaw pierce. The northern pike’s one-part dorsal fin has no sharp spines and is located along the top of the fish close to the tail. Young northerns have light bars on their darker greenish colored bodies. On the adults, these light-colored bars break in to irregular spots. Northern pike have an especially slimy body, which reduces friction as this predator accelerates through the water.

In Minnesota, northerns ranging from 2lbs-15lbs are fairly common, and can grow to over four feet in length. The average size is about 2 to 5 pounds. The MN state record for a northern pike caught on a hook and line is 45 pounds, 12 ounces, length n/a, from Basswood Lake (Lake County), 05/16/1929. 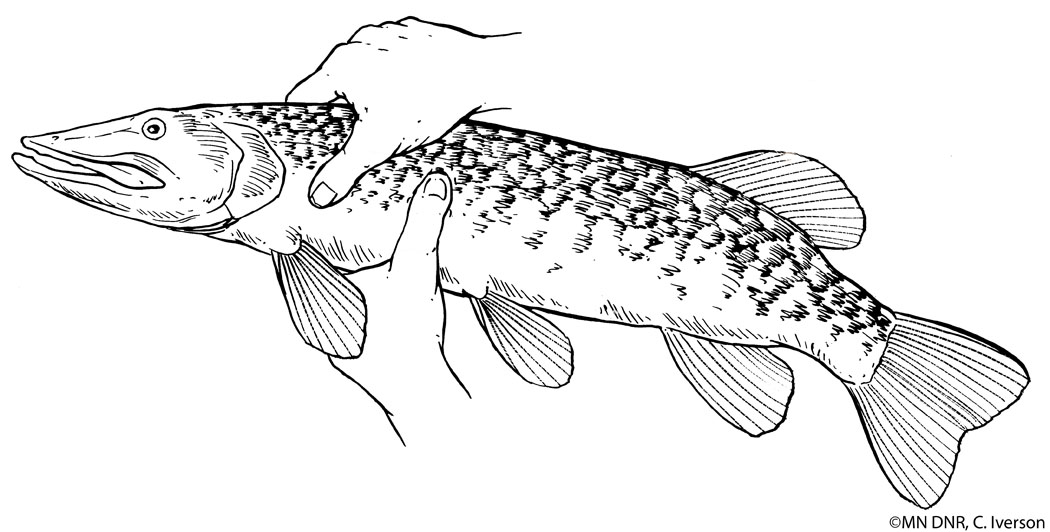 Take special care in handling any fish you intend to release. In deep water, if possible, bring the fish up slowly to prevent stress from changes in water temperature and pressure.

Keep the fish in the water as much as possible. Don’t let it flop around, even a little water under a thrashing fish protects it. More times than not, the hook can be removed while leaving the fish in the water. If necessary, use a net to lift larger, heavier fish out of the water. Nets, if used, should be made of soft nylon or cotton. Attempt to remove the hook while leaving the net and fish in the water. Because of the rows of sharp teeth, take special care when handling a northern pike, keeping fingers well away from the fish’s mouth. Remove hooks quickly with long-nosed pliers, not your fingers. If a hook is deeply set, cut the line and leave the hook in place.

You may want to take a photo of your catch. Remember to handle the fish gently - keep your hands wet to protect the slime covering. Never put your fingers in the gills or eyes to lift or hold the fish. This is an older method that assuredly will cause damage and in most cases will kill the fish. Always hold a fish horizontally. Holding vertically places stress on the vertebrae. After your photo, release the fish gently back into the water. Never release a fish that has been held on a stringer, once on the stringer, it is part of your possession limit. Culling fish and live well sorting is illegal.

The northern pike is a carnivorous lie-in-wait predator and a daytime feeder.  Its diet consists mostly of other fishes but a northern will pursue any living thing up to a third its body length that will go down its throat: ducks, mice, rats, frogs, snakes, crayfish, and nearly all fishes, including other pikes. Adult northerns do have a special fondness for  4” – 15” suckers and yellow perch.  Northerns will often stalk their prey from below before gulping it down, much like an alligator.

In late winter or early spring, adult pike migrate into shallower tributary streams, flooded grassy lowlands, or shallows of lakes to spawn in April and May when water temperatures are around 40-50 degrees. No nest is constructed. The females look for vegetation and randomly release or spread between 15,000 and 75,000 eggs which are fertilized by 1-5 males. Once the sticky eggs are released and fertilized by the males they adhere to the vegetation. After spawning the adults return to deeper water.

The eggs hatch after about ten days to two weeks. Once the fry (newborns) have used up their egg sac they begin to feed on phytoplankton and aquatic insects and soon will switch to other small fishes. The fry stay in their spawning areas until they’re about two to three inches long. Then they move to deeper water. Lesson 1:3 - Run For Your Life Cycle allows students to role-play being a northern pike starting as an egg and trying to survive to spawn as an adult.

Of course, young pike start out quite small and are eaten by pretty much everything that eats fish, including bigger fish, snakes, otters, a wide variety of birds (e.g., herons, mergansers, loons, ospreys, kingfishers), turtles, dragonfly nymphs, etc. As they grow (if they survive, that is), their predator pool shrinks accordingly. Large pike sometimes eat smaller pike. Adult pike, which
reach over four feet in length and are accomplished predators themselves, have no significant predators other than humans.

Popular tackle for pike is a spoon.

Since it is such a voracious feeder, the northern pike is exciting to catch and will readily attack all manner of lures, especially larger plugs and spoons. It will take minnows fished on bobbers and under the ice. Don’t forget a steel leader for larger pikes or you will likely lose your lure as those sharp teeth will easily cut through your mono-filament line. The best fishing technique for pikes is casting or trolling around beds of aquatic vegetation and stumps in shallow water, where they stalk their prey.

You need a good, sharp fillet knife to get the fish ready for the frying pan. Removing pike bones is not a fine art and the prep is not much different from filleting any other fish. You will need an extra step or two to remove the Y bones. You can find many resources including step-by-step videos on-line for cleaning, filleting and deboning pike.

There are many tasty recipes for cooking pike. Try cooking outdoors over a fire, in the kitchen in a fry pan - wrap it, stuff it, or roll it in beaten eggs and cracker crumbs. The real secret is to eat smaller pike and cook the fish while it is fresh. The flesh of northern pike can get a slight grainy texture after being frozen. The chunky, flaky white meat of freshly cooked pike is as delectable as that other Minnesota fish, the walleye!