What is Native Prairie?

Wildflowers and grasses on a native Minnesota prairie. © Katelin Goebel 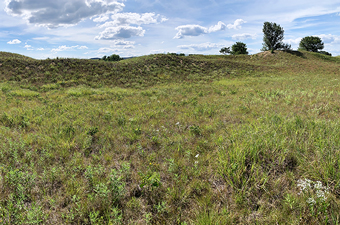 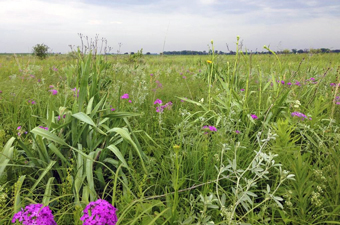 Mesic prairies may be dry through most of the year with the water table below the plant roots, but there is adequate moisture to keep this prairie lush. They are often dominated by the tall grasses big bluestem and Indian grass, with a lesser cover of porcupine grass, prairie dropseed, little bluestem, and switchgrass. Abundant wildflowers include Maximilian sunflower, heart‑leaved alexander, goldenrods, purple and white prairie clovers, smooth blue aster, tall meadow‑rue, and wood lily. The short shrubs leadplant, prairie rose, and wolfberry are often also present. These prairies can look very different in drought years versus wet years with species that thrive in those conditions being more abundant. In southern Minnesota, mesic to dry‑mesic prairies can be habitat for the federally threatened prairie bush clover. 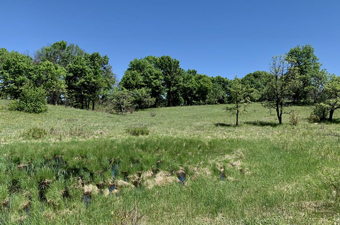 Savannas are prairies with scattered native trees. They form where the frequency and severity of fire are low enough to allow some fire tolerant trees to reach maturity, but with enough fire to maintain prairie plants and prevent trees and shrubs from becoming dominant. Dry savannas have a mix of plants similar to dry prairies with scattered trees. Tree cover usually consists mostly of bur oak, and in southeastern Minnesota can include black oak, pin oak, or jack pine. Savanna trees often have spreading crowns and their trunks may be gnarled. Mesic savannas also occurred historically in Minnesota, though they are almost completely gone due to conversion for other land uses, alteration of disturbances such as fire, and succession to woodlands or forest. Oak savannas are one of Minnesota's rarest native plant communities. 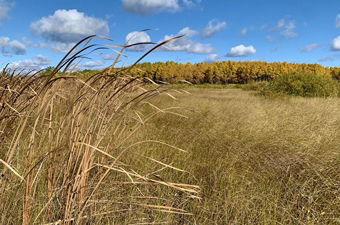 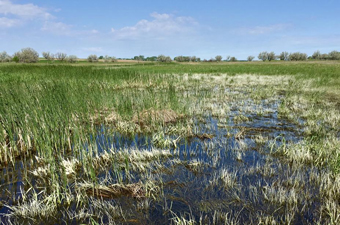 Prairie wet meadows/carrs  are characterized by mid‑height to tall graminoids (grasses, sedges and rushes), including prairie cordgrass, narrow reedgrass, Sartwell's sedge, Buxbaum's sedge, and woolly sedge. tussock sedge or Canada bluejoint are sometimes dominant. Common wildflowers include giant and sawtooth sunflowers, panicled aster, water smartweed, swamp milkweed, water hemlock, wild mint, and spotted Joe-pye weed. Prairie wet meadow/carr communities in lowlands are found around waterways, shallow depressions, and frequently occur in complexes with wet prairie and marshes. They are generally inundated in the spring with the water table near the surface most years but are dry enough that organic matter decomposes, and peat soils do not form. "Carr" refers to a shrubby wetland. The combination of wet meadow/carr refers to a community with no distinct cutoff between the two. The shrub cover can vary from dominant to absent and it is often highly variable across a site.

Minnesota's prairie landscape is a mosaic of different native plant communities that provide many benefits to the people of Minnesota. Prairie is often intermixed or adjacent to wetlands including rare calcareous fens, rivers and streams, lakes, rock outcrops, and woodlands. Of note, some of the highest quality wetlands, rivers, and streams are those surrounded by native prairies.