Not all bur oaks get bur oak blight. Symptoms of bur oak blight are first seen in mid-summer, but the most obvious symptoms are not apparent until late summer. Bur oak blight initially kills segments of leaf veins, and then it kills wedge-shaped segments of leaves between leaf veins. Disease starts in the lower canopy. Bur oak blight may also cause rapid leaf loss, initially in the lower and middle canopies. In severe cases, all but the outermost leaves around the canopy will be killed. Bur oak blight might cause minor dieback, but it will not kill major limbs. Other problems such as Armillaria root disease, twolined chestnut borer, and oak wilt kill major limbs. 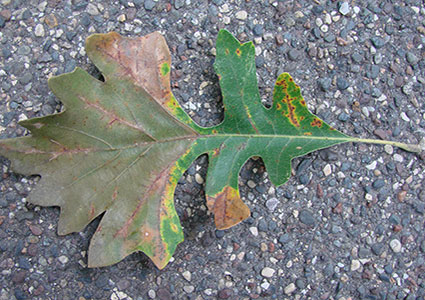 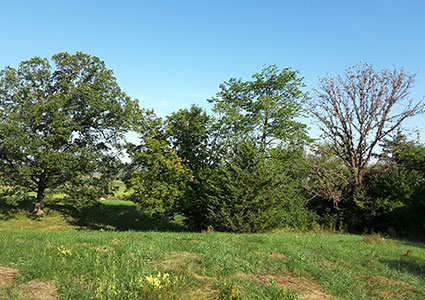 Bur oak blight can have a severe impact on individual bur oaks (oak on the right), but not all bur oaks are affected by it (oak on the left).