Because bur oak blight is a native disease made worse in susceptible trees by wet springs and wet summers, it is not possible to control population levels of the pathogen. However, since many bur oaks tolerate BOB, we recommend leaving those that are not susceptible to BOB to pass on potential resistance to the next generation. In years with above-average spring and summer precipitation, you can identify BOB-tolerant bur oaks from mid-August through September.

During regularly scheduled management, we suggest culling bur oaks with dieback, abundant epicormics, and those that regularly sustain severe defoliation from BOB. Not only are these stressed oaks more susceptible to various pests and diseases, but we have observed more BOB on stressed bur oaks. We recommend reforesting with a variety of trees appropriate for the site, including bur oak, and protecting them from deer browse, cattle rubbing, and other disturbers.

Despite BOB, bur oak is an excellent species for Minnesota’s future and should not be discouraged. In all cases, promoting tree species diversity is a wise choice to make forests resilient to weather, diseases, and insects. 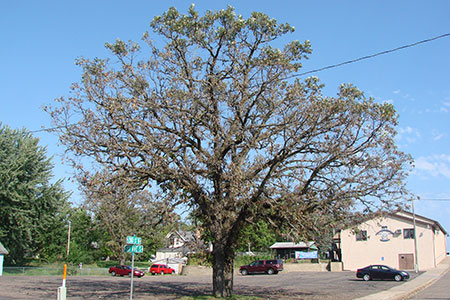 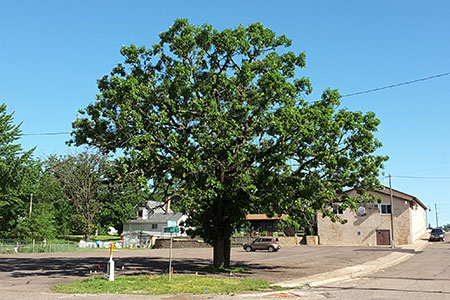 The same bur oak as above, but photographed in June 2017. Bur oaks susceptible to bur oak blight often look healthy the following spring.

Just because a bur oak has BOB does not mean you should cut it down. In most cases, the tree will leaf out just fine the following year. In fact, we are aware of bur oaks that have sustained severe BOB every year for well over a decade without apparent harm. If a bur oak has significant branch dieback, and if you want to remove it, do so from August through March to avoid possible aboveground oak wilt infection to neighboring oaks.

While fungicide treatment may not be necessary to sustain the health of a susceptible bur oak, injections of propiconazole will prevent symptoms on some bur oaks. Iowa State University suggests that propiconazole injected at half the maximum label rate can reduce BOB in some healthy bur oaks for at least three years if applied in late spring, as soon as leaves are fully formed. Propiconazole is hard on bur oak leaves and can burn them, but healthy bur oaks can overcome this temporary stress.

We do not recommend spraying fungicides on canopies to prevent infection because the fungicide may drift to non-target plants, animals, and people. You would also need to apply the treatment to the entire canopy multiple times throughout the growing season—something that’s typically impossible on large, susceptible bur oaks.

Only consider chemically treating bur oaks that do not have any dieback or epicormic shoots. Also, bur oaks can tolerate several years of leaf infection, so only treat if a tree has had two consecutive years with more than 40 percent leaf loss from BOB. After treatment, don’t treat again until the tree has lost roughly 40 percent of its leaves to BOB for two years in a row.