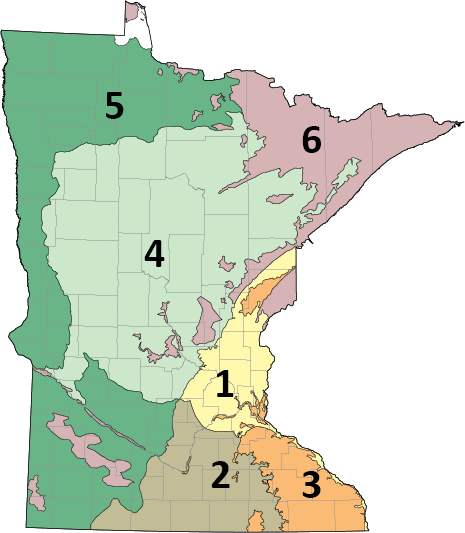 The first online version was introduced in 2001. Since then, updates to state geologic mapping (available from the Minnesota Geological Survey) have improved some province boundaries and added details that are reflected in the updated map.

GIS files are available on the Minnesota Geospatial Commons. 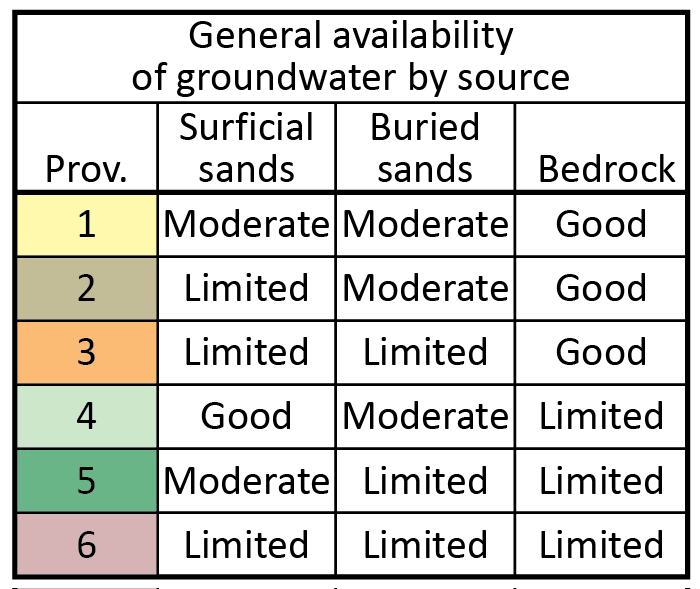 These provinces are characterized by buried sand aquifers and relatively extensive surficial sand plains, part of a thick layer of sediment deposited by glaciers overlying the bedrock. Province 1 is underlain by sedimentary bedrock with good aquifer properties. Province 4 has thick glacial sediment, sand and gravel aquifers are common, and the deeper fractured crystalline bedrock has poor aquifer properties and limited use as an aquifer.

The glacial sediment in these provinces is typically fine-grained (e.g., clay and silt) and may contain only limited extents of surficial and buried sand aquifers. Province 2 contains sedimentary bedrock aquifers that are commonly used. Province 5 contains fractured bedrock commonly buried deeply beneath glacial sediment and is of limited use as an aquifer.

Sediment in these provinces is thin or absent and, therefore, not used or relatively unimportant as aquifers, except in major river valleys where sediment thickness is greater. Province 3 is underlain by productive bedrock aquifers, however those closest to the land surface are often impacted by human activities. Province 6 is mostly underlain by crystalline bedrock that typically has limited groundwater available for use. 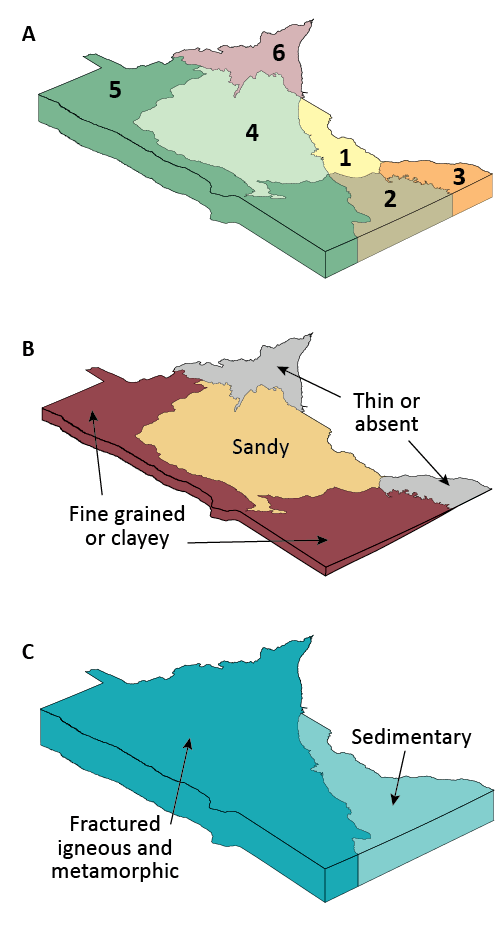 The six groundwater provinces (A) were created by combining the regional characteristics of two general types of aquifers: unconsolidated sediment (B) and bedrock (C).

Layered above bedrock nearly everywhere in the state is unconsolidated sediment deposited by glaciers, streams, and lakes. The state can be divided into three regions based on sediment composition and thickness.

In the northeast, southeast, and other scattered areas the sediment is generally thin or absent. Major river valleys in these regions are an exception, as they commonly contain sufficiently thick sediment for use as aquifers.

In central and east-central Minnesota the sediment is relatively sandy and aquifers are more common.

In the western portion, sediment is relatively fine grained (higher amounts of clay and silt) and aquifers are less common.

The state is divided into two bedrock aquifer regions by general bedrock type.

The southeastern third of Minnesota has good bedrock aquifers comprising thick, laterally extensive sequences of sandstone, siltstone, and limestone and dolostone of sedimentary origin. Groundwater occurs in granular pore spaces, partings, joints, fractures, and dissolution features. Karst (e.g., sinkholes, solution conduits, fracture-flow, caves) is common in the extreme southeast and to a lesser extent in the east-central portion. In karst, water availability may be very good, but water quality may be impacted by land-surface activities. Conditions vary locally, but these aquifers are generally capable of yielding sufficient quantities of groundwater for most purposes.

The remainder of the state has limited bedrock aquifers. The uppermost bedrock is mostly hard crystalline igneous and metamorphic rocks. Groundwater mostly occurs in smaller fractures that may not yield useable quantities of water. In southwestern Minnesota and other scattered locations, Cretaceous age sandstone aquifers are interbedded with thick shale above the hard, fractured bedrock. These sandstone aquifers are relatively thin and generally only locally useful.