One measure of a lake's health is the community of fish, plants and other aquatic life it sustains (i.e., biological community). Certain species cannot survive without clean water and a healthy habitat while other species are tolerant of degraded conditions. Species that fall into either of these categories are considered "indicators" of the health of a lake. An index of biological integrity (IBI) is a score that compares the types and numbers of fish, plants or other aquatic life observed in a lake to what is expected for a healthy lake.

The biological communities present in a lake are the result of cumulative effects of natural and human-caused influences within the entire area of land and water that flows into the lake (i.e., the watershed). These communities change in predictable ways in response to factors such as degraded water quality or loss of shoreline habitat. Scientists are able to assess the overall biological health of a lake based on measurements of these communities.

The DNR developed fish-based IBIs by sampling a wide range of lakes, from high-quality lakes to those with significantly degraded water quality or shoreline habitat. A statistical analysis found a relationship between the fish communities and water quality and physical habitat characteristics. Additional details about this process can be found in the development of fish-based IBIs for Minnesota lakes journal article.

The Minnesota Pollution Control Agency (MPCA) has developed similar IBIs to assess biological communities in streams and rivers in Minnesota. For more information on these IBIs, go to the MPCA index of biological integrity and biological monitoring of water in Minnesota webpages. 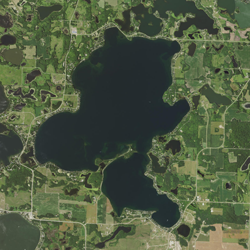 Big Cormorant Lake is an example of a deep lake with a complex shaped shoreline. 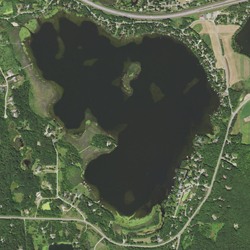 Big Spunk Lake is an example of a moderately deep lake with a rounder shoreline. 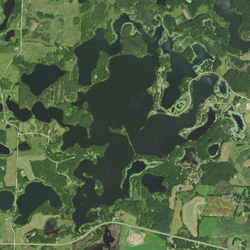 Spitzer Lake is an example of a moderately shallow, heavily vegetated lake. 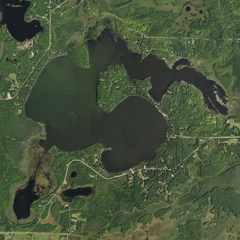 Lake Minnewawa is an example of a shallow lake.

There are many different methods to sample fish in a lake, and each method targets different kinds of fish. The DNR uses gill netting, trap netting, seining and backpack electrofishing (pictured at the top of this page) to collect the fish community information needed to calculate an IBI score for a lake.

Once the fish have been collected, they are identified to species, counted, weighed, measured and released back into the lake when possible. Information on the number of species and quantity of individuals collected are used to calculate the IBI score.

The fish-based IBI incorporates multiple measurements of the fish community. When the measurements are added together, they produce a score that reflects the lake's biological health.

Each IBI score is generated using between eight and fifteen calculated measurements, depending on lake type. Examples include either raw counts or proportions of species that are classified as: native, intolerant, tolerant, vegetation-dwelling, small benthic-dwelling, insectivorous, carnivorous, omnivorous, or belonging to the cyprinid (i.e., minnows and shiners) family. More information about these measurements and the species included in each can be found on the classification of fish species in Minnesota lakes webpage.

These measurements are known to correspond with varying levels of human-caused stress from activities such as land use alteration within a lake’s watershed and physical habitat alteration along a lake’s shoreline.

The fish-based IBI is one important component that is considered during the MPCA watershed assessment process. Specifically, it is the primary tool used to assess whether a lake fully supports aquatic life. Similarly, the MPCA lake monitoring program uses physical measurements of water quality such as water clarity and amount of phosphorus to assess whether a lake fully supports aquatic recreation. These measurements represent a snapshot in time of lake conditions whereas the biological community as measured by the IBI reflects changes to the lake over several years or more. Together, these assessments provide important information to guide Clean Water planning and restoration.

Fish-based IBI scores are used by DNR staff to place lakes into one of six assessment categories: exceptional, fully supporting, vulnerable, not supporting (impaired), inconclusive information and insufficient information. Often, multiple scores are considered when making an assessment on an individual lake. The assessment decisions can be used by MPCA, local governments and conservation groups, lake associations and homeowners to guide future lake management actions.

The healthiest lakes that have high quality habitat and support the most diverse fish communities. These lakes have IBI scores above an established exceptional threshold. They are a top priority for protection, especially those at risk of future land use change or shoreline development.

Healthy lakes that support diverse fish communities. These lakes have IBI scores above an established impairment threshold. They are a priority for protection, and some restoration may also be recommended.

Lakes that are somewhat degraded but still support ecosystem functions. These lakes have IBI scores near an established impairment threshold. They are a top priority for restoration and protection of remaining quality habitat. These lakes are included in a formal stressor identification process.

Lakes that are degraded and where sensitive fish species typically no longer live. These lakes have IBI scores below an established impairment threshold. They are a top priority for restoration, which can sometimes be extensive. These lakes are added to Minnesota’s Impaired Waters List and are included in a formal stressor identification process.

Sampling yielded enough data, but results were conflicting or very near an impairment threshold and prevented the ability to make a clear determination about the health of the lake.

Sampling did not yield enough data to make a clear determination about the health of the lake.

Maps of lakes sampled and watersheds assessed based on the fish-based IBI. Click each individual map to enlarge. 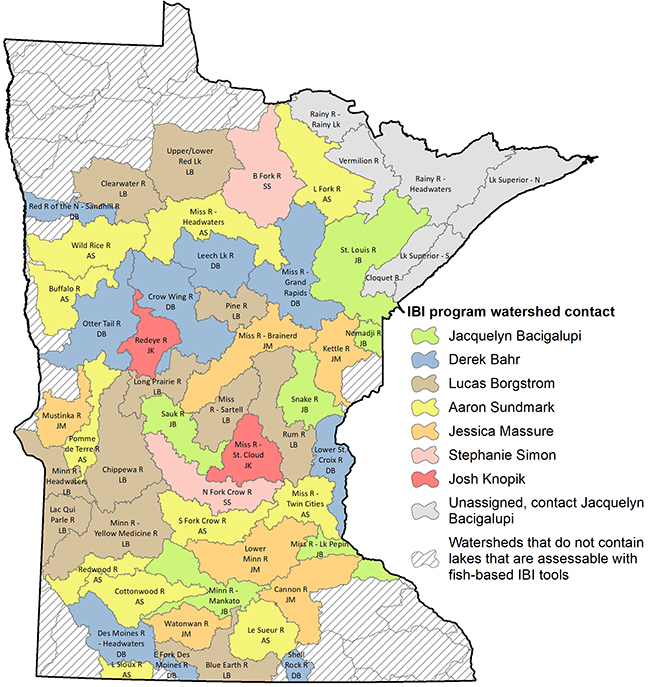