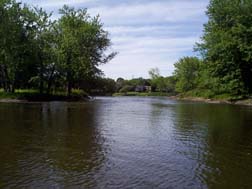 The Mississippi River from St. Cloud to Anoka was added to Minnesota's Wild & Scenic Rivers Program in 1976.

The river is designated as "scenic" from St. Cloud to Clearwater, and "recreational" from Clearwater to the Anoka/Champlin line (see: general river classification information).

The original management plan for this stretch of the Mississippi River was adopted in 1976. A Revised Management Plan was developed in July 2004 by the citizens of Minnesota, local governments, and state agencies using a community-based planning approach.

In 1998, the DNR began a process to review and revise the management options for the designated portion of the Mississippi River. A draft conceptual management plan was developed in 2004; however, implementing the plan would require a change to the current Mississippi River rules found in Minnesota Rules parts 6105.0800 -.0960. In 2006, the DNR published a Request for Comments to consider possible amendments to these rules, which generated over 100 comments with varying degrees of support and opposition.

The rulemaking process has been suspended while the DNR considers a potential merger of the rules governing state-designated Wild & Scenic rivers - including the Mississippi River - into the rules governing Shoreland Management. The primary purpose for integrating the two sets of rules is to simplify administration for local governments by creating one set of rules. However, several material changes to the Wild & Scenic river rules could result from the merger, including: imposition of impervious surface limits and stormwater management requirements, clearer standards and guidance for planned unit developments/conservation subdivisions, and more detailed requirements for open space and vegetative buffers. The DNR is also considering administrative changes including eliminating the requirements for DNR certification of variances and inconsistent plats. Specific changes to the Mississippi River rules are not anticipated as part of this process, but will be revisited in the future to carry forward the effort that began in 1998.