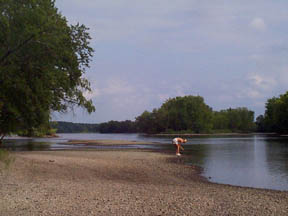 RiverForum1 - Participants identified significant features of the Mississippi River and developed vision statements for the year 2018.

RiverForum2 - Particpants voiced opinions on 26 statements (developed at RiverForum1) regarding significant features of the Mississippi River.

At this RiverForum3 meeting, new participants were first given an opportunity to register opinions on the 26 river significance statements developed at RiverForum1.

In small groups, participants then discussed 6 of the 26 significance statements that had received the highest levels of disagreement.

These were statement #'s:

After a great deal of discussion about whether or not the statements truly reflected the character and condition of the Mississippi River in a unique and significant way, the following statements were dropped:   5.6, 8, and 23. This does not mean they are not important or that they should not be addressed at future planning meetings as issues and concerns. They were dropped only from being considered as the most important factors defining the Mississippi River's unique and significant character.

Statements 5.2 and 26 were rewritten slightly as follows:

5.2 Stretches of the river are high in scenic quality, which can be attributed to natural and undeveloped shorelines.

26. Large tracts of land in public and corporate ownership that remain natural and undeveloped and provide reasonable public access and use, are positive additions to maintaining a natural river character

Future meetings will feature a fifteen minute open discussion session. These "soapbox sessions" will give participants an opportunity to address the entire audience. RiverForums are generally highly structured to ensure that progress can be made in reaching the final goal of writing a new river management plan. However, participants may have personal comments or insights that fall outside the agenda for the evening. While short in duration, these soapbox sessions will allow participants to speak on topics of their own choosing.