Water quality concerns the chemical, biological, and physical characteristics of water. ‘Good’ or ‘bad’ water quality is not a simple determination since there are various types of water uses including:

and various types of pollutants:

A watershed's landscape and climate influences how water quality measurements should be interpreted. Each stream, river, lake and pond tends to exhibit and maintain a characteristic range of water quality measurements. This range may depend on factors such as the hydrology and geomorphology of the contributing watershed. The availability of fine sediments and the supply of groundwater are examples of landscape and climatic interactions that affect water quality.

The Minnesota Pollution Control Agency (MPCA) manages the sampling and monitoring of Minnesota’s surface waters. The MPCA collects water quality data from state, local and federal agencies, as well as citizens. Through these efforts, the MPCA works to protect and improve Minnesota’s rivers, lakes, wetlands and ground water so that they support healthy aquatic communities and public uses such as fishing, swimming and drinking water.

Water quality parameters are measured in the field and samples are collected to be analyzed in the laboratory. The results of each measurement are compared to standards or guidelines to determine if the water source is attaining water quality standards.

The federal Clean Water Act requires each state to adopt water quality standards to protect waters from pollution. These standards define how much of a pollutant can be in the water and still allow it to meet designated uses, such as drinking water, fishing and swimming. A water body is designated “impaired” if it fails to meet one or more water quality standards.  (MPCA:  Minnesota's Impaired Waters List)

All surface waters in Minnesota, including lakes, rivers, streams, and wetlands, are protected for aquatic life and recreation where these uses are attainable.

Water quality parameters listed in the MPCA’s 2014 Proposed List of Impaired Waters include:

High turbidity due to suspended sediment reduces light penetration or water transparency. This impacts the aquatic community through a bottom-up affect. Fewer photosynthetic organisms at the base of the food web are able to grow and nourish the macroinvertebrate community. This then affects the upper trophic level macroinvertebrate community and ultimately fish populations. At the same time, less light favors the growth of the floating nuisance algae cyanobacteria, further limiting light and degrading water quality.

All streams carry sediment, so when does sediment become a pollutant?

A stable stream is able to transport the streamflows and sediment of its watershed over time in such a manner that the channel maintains its dimension, pattern and profile without either aggrading or degrading (Rosgen, 1996 Applied River Morphology). In other words, a stable stream is much less likely to have erosion or sedimentation problems than a disturbed stream. Once disturbed, a stream attempts to revert to a stable dimension, pattern, and profile and to regain its channel-to-floodplain connection, which results in higher sediment yields and negative impacts of suspended sediment (Rosgen, 2006 WARSSS).

Mercury is a naturally occurring element that exists in volcanoes and natural deposits. Mercury is released into the environment during coal combustion, chlorine alkali processing, waste incineration, and metal processing (from USGS Contamination in the Aquatic Ecosystems). Mercury concentrations in the atmosphere have doubled or tripled due to human activities. Mercury exists in various forms with the organic form, methylmercury, being the most toxic. The predominant source of mercury to aquatic systems is deposition from the atmosphere, primarily as rainfall. Once in surface waters, mercury is deposited into the sediments, incorporated into the food web, or volatilized back into the atmosphere.

In the food web, mercury undergoes bioaccumulation when the rate of intake is greater than the rate of excretion. It then undergoes biomagnification as it accrues at each level of the food chain. Mercury levels consequently are highest in the longer living, upper trophic level predatory organisms such as pike and walleye.

Two thirds of the surface waters on Minnesota’s 2004 Impaired Waters List are impaired because of mercury levels in fish and water (Minnesota Statewide Mercury TMDL, March 2007).  As stated in the MPCA’s Minnesota Statewide Mercury TMDL approved March 27, 2007, 99% of the mercury load to Minnesota’s lakes and streams is from atmospheric deposition, of which 70% originates from anthropogenic sources with the remaining 30% from natural sources (e.g. volcanoes). The resulting mercury reduction goal is a 93% reduction in overall anthropogenic emissions from 1990 levels. By 2005, mercury emissions were reduced by 70% leaving 23% of the emission reduction goal remaining.

Phosphorus is a naturally occurring nutrient that is essential for terrestrial and aquatic plant growth. In freshwater ecosystems, phosphorus is generally the nutrient limiting plant growth. However, due to human activities, phosphorus concentrations in affected aquatic ecosystems are so high that phosphorus is no longer limiting and the system is no longer in balance (a process known as eutrophication). This results in algal blooms and excessive aquatic plant growth that negatively impact the aquatic community when these blooms die and decompose. During the decomposition process, microbes consume dissolved oxygen. This creates a stressful or deadly low oxygen (anoxic) environment for the biotic community, including macroinvertebrates and fish.

Phosphorus is added to the environment through point and non-point sources including fertilizers, pesticides, cleaning products (e.g. dishwater detergents), and sewage/manure. Point sources include wastewater treatment plants and industrial discharges. Non-point sources include urban and agricultural runoff. Eutrophication was the third leading cause of impairment in Minnesota lakes, ponds, and reservoirs in 2004 and 2006 (MN Causes of Impairment 2010).

Contaminants are broadly defined as any synthetic or naturally occurring chemical or microorganism that has the potential to enter the environment and cause known or suspected adverse ecological and/or human health effects. (http://toxics.usgs.gov/regional/emc/)

Industrial and agricultural contaminants such as herbicides, insecticides, and various chemicals compounds enter surface waters through point and non-point sources. These compounds and their by-products have detrimental environmental and health effects. These contaminates are of serious concern since some are known to be mutagenic, carcinogenic, or toxic and some have been found to bioaccumulate in the food web.

Biological monitoring is conducted to assess the health of aquatic environments by assessing the fish, macroinvertebrate, or plant communities. A bioassessment is an evaluation of the biological condition through surveys and direct measurements of the resident biotic community (presence, numbers, and condition). Bioassessments are a very valuable way to determine the health of an aquatic system.

Bioassessment results that show poor biological condition may lead to a waterbody being listed as “impaired” for aquatic life. Some of the leading causes of aquatic life use impairment include: poor habitat quality, altered stream flows, high turbidity and sedimentation, low dissolved oxygen concentrations, eutrophication, and contaminated sediments. 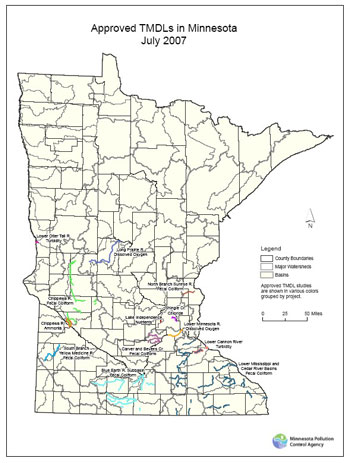 A TMDL or Total Maximum Daily Load specifies the maximum amount of a pollutant that a waterbody can receive and still meet water quality standards, and allocates pollutant loadings among point and non-point pollutant sources. A TMDL must contain a margin of safety and a consideration of seasonal variations. By law, the EPA must approve or disapprove lists and TMDLs established by states, territories, and authorized tribes. Under section 303(d) of the 1972 Clean Water Act, states, territories, and authorized tribes are required to develop lists of impaired and threatened waters that do not meet water quality standards that have been set for them and to develop TMDLs. The Act also banned the discharge of pollutants into navigable waters from a point source without a permit and funded the construction of sewage treatment plants. The overall goal of the Clean Water Act: restoring and maintaining the chemical, physical, and biological integrity of the nation’s waters.

Early on, federal, state, and tribal governments emphasized the control of point sources, such as industrial discharges and municipal sewage treatment effluent. As those sources of pollution were controlled, regulators turned to the more difficult task of controlling non-point sources, such as street and farmland runoff. Likewise, regulators initially concentrated on the chemical aspects of clean water, but more recently the attention has shifted to physical and biological measures of water quality.