At Risk Species Richness studies the number of different at-risk species of birds, fish and mussels are found in each watershed.

In Minnesota, 346 species meet the definition of species in greatest conservation need (SGCN). SGCN are defined as native animals, nongame and game, whose populations are rare, declining, or vulnerable to decline and are below levels desirable to ensure their long-term health and stability. Also included are species for which Minnesota has a stewardship responsibility (Wildlife Action Plan 2015-2024, pg 16). This number represents sixteen percent of the greather than 2,000 known species to occur in Minnesota (WAP, pg 19).

SGCN face a variety of challenges related to their future population abundances. For example, changes in habitat availability, low tolerance for changes in habitat, narrow habitat requirements, low numbers, and invasive species can make a species vulnerable to a change in abundance. 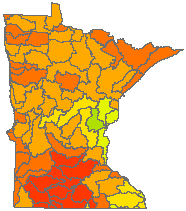 An area that contains a large number of SGCN species indicates the presence of suitable habitat, but also indicates a greater potential for local extirpation of at-risk species that may relate to changes in land use, pollution, or other factors. Alternatively, mussels may have always been rare in some areas in Minnesota, thus there may be uncertainty whether mussels are declining or are at levels that will lead to their extinction. Trends in richness of at-risk species over time are an important indicator of watershed health.

Some SGCN species have characteristics that make them vulnerable. For example, species that: require large home ranges, use multiple habitats, depend upon large habitat patch sizes, have low reproductive rates, or depend upon an ecological process (e.g. fire) that no longer occurs across the landscape are more vulnerable to changes that occur on the landscape.

The At-Risk Animal Species Richness Index provides important information about the richness of these vulnerable species. This index includes data collected for fish, mussel and bird species. As biological indicators, these sensitive at-risk species can reveal those watersheds that may be acting as refugia for sensitive species and those that may no longer have the habitat required to support these sensitive species.

Biological populations of animals are best assessed using multiple taxonomic groups (Gore et al. 2001, Wang et al. 2006, Yagow et al. 2006). Biological indicators developed for a specific taxonomic group (e.g. fish or macroinvertebrates) are sensitive to different human-induced changes and spatial patterns, so at least two different taxonomic groups should be assessed when evaluating a watershed (Karr 1981, Brazner et al. 2007, Flinders et al. 2008). For example, mussels are relatively immobile and live in close contact with both the sediments and the water column, thus their population trends reflect impacts at a local scale (Weigel et al. 2003, Brazner et al. 2007, Flinders et al. 2008, Stepnuck et al. 2008). Fish, on the other hand, tend to indicate watershed-scale impacts because they can move to other areas of the watershed in response to changes in the watershed. Therefore, fish can tell us something about the watershed. Birds are very mobile and can be indicators at the scale of a watershed or a region. Aquatic organisms can be used to assess changes in aquatic systems, whereas the number of bird species provides information about changes in terrestrial systems.

The At-Risk Species Richness Index is based on the number of mussels, fish, and bird species of greatest conservation need (SGCN) that have been found in each watershed. The same data and processing steps are used for this index as for the Species Richness index, using a subset of the data.

The index was developed in three steps:

Each taxonomic group was ranked from 0 to the highest recorded mean richness value for watersheds across Minnesota. The range of values (mean species count per watershed) were:

The three taxonomic groups were scored 0-100 and averaged into a final At-Risk Species Index value. The combined scores were also scaled 0-100 to give a final species richness score.

The pattern of distribution of at-risk species varies between the 3 input metrics (taxonomic groups).

When combined, the highest scores trend from central to eastern Minnesota and the lowest scores centered in the Minnesota River Valley.

This index provides an excellent complement to the Animal Species Richness Index. For example, a watershed may have a high score for the number of species present, but a higher number of the at-risk species may reflect changing habitats or changes in land uses. Jelks et al. (2008) stated that habitat alteration, fragmentation, and non-native species are the main threats to at-risk species. Habitat alteration was the listed cause for 92% of the inland at-risk fishes of North America.

A reduction in the number of species may indicate a loss of access or connectivity in some part of the system (Meffe, Carroll and contributors 1997). Areas with structurally simple habitats, such as areas with extensive agriculture, generally support fewer terrestrial or bird species than complex habitats, such as forested areas. For example, a forest has a number of structural layers: grasses in near the land surface, shrubs, and the canopy of trees that provide a number of diverse habitats, especially for birds.

The presence of at-risk mussel and fish species in a watershed is closely related to the absence of a natural flow regime under which those species evolved. An altered system may have less diverse habitats, a more limited stream flow pattern and limited access to important refugia. The richness of SGCN bird species may also be impacted by loss of wetlands, floodplains and riparian habitats along with reduced food sources that often accompany hydrologic alterations.

The geomorphic setting plays a key role in determining the expected species richness of a watershed system and influences the degree to which soil erosion, climate extremes, and other stressors may impact habitat quality and species richness. For example, sedimentation can influence filter feeding of mussels and fishes that feed on macroinvertebrates that live in the streambed.

Loss of connection between and within terrestrial and aquatic habitats reduces species richness and composition by limiting access to the full range of necessary habitat types. At-risk species may have specific habitat or life cycle requirements that make them particularly vulnerable to decline with loss of habitat connectivity. Mussels are particularly sensitive because they use fish hosts in their life cycle and are dependent on the ability of fish to migrate, thus dams can influence mussel distribution.

Degraded water quality directly influences the richness of aquatic species, often reducing the number of sensitive fish species able to survive in the system. Mussels, since they cannot move as fish and birds can, may be at higher risk of pollutants transported in the water. Bird species that feed on aquatic plants and animals will likewise see reductions in species richness as their preferred food sources become more limited.

Biological diversity, i.e., the variety of living organisms and the ecological processes that support them, is an important concept in ecological study (Meffe, Carroll and contributors 1997). The conservation of biological diversity generated a movement and a new scientific discipline, Conservation Biology, in the early 1980s (Meffe, Carroll and contributors 1997). Diversity measures are often used to compare communities and to assess a change in richness related to a pollutant or conversion from one land use to another, such as draining a wetland to increase agricultural acreage.

The presence of at-risk species is related to a large number of interconnected factors including: converting land to an alternative use (such as urban development), a change in the quality of habitat, fragmentation and loss of connectivity of habitat. Jelks et al. (2008) reported that 3 to 5 factors were responsible for listing a species as threatened, endangered, or vulnerable.

When changes in a community of species occur, one or more species may increase in number while other species decrease in number. For example, Staton et al. (2003) found that the northern riffleshell (Epioblasma torulosa rangiana) has declined by 95% from its historic range in North America and the wavy-rayed lampmussel (Lampsilis fasciola) has also declined in the Great Lakes due in large part to the invasion of the zebra mussel. As well, trends in the change in community structure have resulted in increasing family Anodontinae mussels while family Lampsilinae mussels are declining in Lake Erie and Lake St. Clair drainages (Metcalfe-Smith et al. 1998). Members of the family Anodontinae are thin shelled and can survive in soft silty areas and are considered pollution-tolerant.

There may be also be significant biogeographic reasons why there are few mussel species in more northern and western watersheds in Minnesota, which could partially explain why there are fewer “rare” species.

This index is strongly supported, resting on a well-developed theoretical foundation that began in ecological research near the early years of the last century, with strong theoretical support in the technical processes of generating the base data and index and empirical tests of its application.

The advantages of the At-Risk Animal Species Richness Index are that it summarizes multiple taxonomic groups in a single number and that it can be effective as a communication tool. When the same objectives and variables are used, the index can be used to convey relative differences in habitat quality between sites and over time. For example, care must be taken when comparing among sites because of natural variability in water quality constituents.

Data to update scores should be available in the future because the MN DNR mussel program has a monitoring component, the MPCA plans to assess fish populations in major watersheds on a 10-year cycle and the Breeding Bird Survey is conducted annually and is well supported and expected to continue.

Although fish and mussels have been assessed broadly across the state, some watersheds have fewer assessments than others and a small number of watersheds have not been assessed. As well, most fish assessments have been conducted in small streams within the 81 watersheds, because small streams represent 80-90% of stream miles within watersheds (Leopold et al. 1964) and most are “wadeable” by biologists. Thus, the condition of many larger rivers can only be inferred.

The numbers of bird species has been collected systematically in Minnesota since 1968 by both agency biologists and volunteers, and compiled into the Breeding Bird Survey. Thus, the BBS provides information about the trends in bird species for about 50 years. However, because breeding birds migrate to other areas, declines in the number of many species reflect a combination of changes in habitat in Minnesota and in their wintering grounds.

The index could potentially be improved in the future by including aquatic macroinvertebrates as part of the SGCN. The scoring for the At-Risk Animal Species Richness index could be improved by having an expected species richness value for each watershed. There is a natural range in expected species richness across Minnesota that is not accounted for by the current index scoring. Each taxonomic group in this index are assessed in a different manner, thus weighting the scores may provide a more uniform scoring system.

The richness of At-Risk Plant Species would also improve this index. When statewide mapping of at-risk plant species is completed, this metric could be added to the index for a better indication of overall richness of at-risk communities.