How healthy are the assemblages of aquatic species in the streams of each watershed?

The number and type of aquatic animals found living in a stream system are a reflection of their environment, landscape features, land use history, and connectivity among habitats. With land use change, such as removing permanent vegetation or altering natural water features, conditions throughout the stream system can degrade. The assemblages of macroinvertebrate, fish and mussel species are used to indicate the health of an aquatic system. If the expected diversity of species is present, this indicates good habitat and a healthy community of organisms. A reduced number of species indicates a decline in habitat condition. A large number of species tolerant of altered habitat conditions also signals a decline in stream condition. 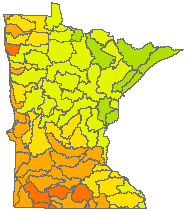 There are three different metrics provided within the stream species quality index: Fish IBI, Aquatic Macronvertebrate IBI, and Mussel score. Each metric score uses a unique distribution of sample points across the state. At the major scale, these metrics are combined to create an overall mean index score. The distribution of sample points is not sufficient to support a catchment scale combined index score.

The macroinvertebrate and fish species data from the Index of Biotic Integrity (IBI) stream surveys of the Minnesota Pollution Control Agency (MPCA) were used for these two metrics. Each stream survey site uses a large number of measured parameters to combine into an overall IBI value (0-100). Each site also has a threshold value that is used to determine biological health or impairment. The threshold value is compared to the measured value to determine whether the site meets the criteria for biological health.

If the IBI score is higher than the threshold value, find relative score between threshold and 100:

If the IBI score is lower than the threshold value, find relative score between 0 and threshold:

The maximum "catch per unit effort" is limited by number of mussels that a researcher can retrieve in one minute. This maximum value has been set to 25. The CPUE values of 0-25 were multiplied by 4 to create 0-100 scaled values for this metric.

Species that have individuals in the age category 0-5 were considered to be recruiting young mussels.

Step2: Each species is given a tolerance rank in the range of 1-5
5 Intolerant (very sensitive)
4 Sensitive
3 Facultative/intermediate tolerance
2 Tolerant
1 Very Tolerant (least sensitive)

Step 3: Relative tolerance ranking for each species was calculated

Step 5: Relative Tolerance values for a site range from 0-5. In order to create a comparable metric of 0-100, this value was multiplied by 20.

The overall mussel site quality score was created by combining the four population measurements into a mean value.

The results for fish and aquatic macroinvertebrates show a similar pattern, but the fish metric shows a broader range of health scores. The Minnesota River Basin, the Red River Basin, and the Twin Cities have lower scores, with fish scores generally lower than the invertebrate. The southeast, central and northeast portions of the state have higher health scores, with fish scores generally higher than invertebrate scores.

The lowest scores for mussels are in the southern third of the state, followed by some low scoring watersheds in the far northwest. The rest of the state had health scores near the middle of the range.

Health scores for the fish and aquatic macroinvertebrates at the catchment scale reflect mixed health conditions from low to high, widely scattered statewide. However, lower scoring catchments dominate the Minnesota River basin, and just upstream of the Twin Cities. In contrast, high scores are found along the eastern edge of Minnesota. The St. Croix River basin, northeast Minnesota, and southeast blufflands have predominately higher scoring catchments.

The mussel results show consistently low health scores throughout the southern part of the state, including the Missouri River Basin in extreme southwest, the southern streams that flow into Iowa. Pockets of lower scores are also found in the Cannon and Root River watersheds and catchments near the Red River. Higher scores are found in the Mississippi Headwaters, the north central lakes area and the headwaters of the Red River.

In much of central and north-central Minnesota, the fish, aquatic macroinvertebrate and mussel scores tend to the middle of the range; near 50. However, each species group tells a somewhat different story.

Macroinvertebrates and mussels are sensitive to channel modification, siltation, and changes in hydrology. Macroinvertebrates and mussels primarily live on or in the streambed, and they have limited mobility. Increased sediment inputs and siltation may extirpate local populations, and low dispersal allows these low numbers to persist. The lowest scores for mussels were found in watersheds with significant agricultural land use in the southern part of the state, and in some portions of the Red River Valley. In contrast to mussels, the lowest scores for macroinvertebrates were more widely distributed, but with concentrated pockets of lower scores in the central part of the state. The fish scores were also lower across the middle of the state, including portions of the Upper Minnesota, Upper Mississippi, and Upper Red River drainages.

Both low and high scores for each species group are widely dispersed, particularly at the catchment scale. A wide range of scores within the same drainage may indicate a range in the landscape conditions that influence each stream species metric. There are also important relationships between metrics. For example, specific host fish carry and disperse the juvenile stage of mussels. This creates an interesting dynamic relationship between fish species, mussel species and structures that create barriers to fish migration. More investigation is needed to understand the disparity in scores and patterns among these species groups.

The introduction of contaminants, temperature changes, sediment, nutrients and other inputs into the aquatic environment have a direct impact on the ability of aquatic organisms to survive and thrive. The loss of more sensitive (intolerant) aquatic species is often the direct result of water quality degradation.

Many aquatic species need a variety of habitat types to complete their life cycle. Aquatic systems fragmented by dams, zones of poor water quality, levees, ditches, low flows, and other barriers to movement often eliminate access to essential habitats and result in the loss of aquatic species diversity.

The viability of aquatic species is closely related to changes in the hydrologic flow regime and runoff from the surrounding terrestrial landscape. Many species are sensitive to sediment loads, temperature fluctuations, and the timing and magnitude of discharge. Aquatic species assemblages have been found to be closely linked to hydrologic alteration. Diminished flows were the primary predictors of biological integrity for fish and macroinvertebrates communities at more than 200 sites across the United States and the likelihood of biological impairment was related to the severity of diminished streamflows.

This index is well supported, resting on a well-developed theoretical foundation, with strong theoretical support in the technical processes of generating the base data and index. There are a broad set of studies connecting changes in ecological, chemical, and physical characteristics of water bodies (Armitage et al. 1983; Wright 1995; Norris 1995; Marchant et al. 1997; Hawkins et al. 2000).

Previous studies have found various relationships between the percent agricultural use and forest harvesting in a watershed and fish assemblages. IBI scores, have been found to decline with an increase in the percent agricultural land (between 35 and 70%), especially in riparian areas (Roth et al. 1996, Wang et al. 1997, Lyons 2006). Deforestation in riparian areas may also result in a reduction in the number of species or a change in species assemblage to more tolerant species (Jones et al. 1999).

Although fish reflect changes in land use in a watershed, macroinvertebrates may be more sensitive to human-induced changes at local scales. Macroinvertebrates respond to stream conditions relating to discharge and channel characteristics, as well as contaminants (Yagow et al. 2006, Brazner et al. 2007, Riva et al. 2008, Stepenuck et al. 2008). Wang and Kanehl (2003) found a shift from intolerant macroinvertebrate species, such as Ephemeroptera, Plecoptera, and Trichoptera (EPT), to more tolerant species and lower community richness with increasing urbanization.

The number of mussel species was highly variable across the state. Mussels are relatively immobile and live in close contact with both the sediments and the water column, thus along with macroinvertebrates, reflect impacts at a local scale. Mussels may have always been rare in some areas in Minnesota, such as the northeast, thus there may be uncertainty whether mussels are declining, and may be classified as “rare”.

Agriculture, forest harvesting, and urbanization alter the hydrology in a watershed resulting in increased sediment, nutrient and contaminant delivery to streams, and an increase in water flow, which can result in streambank and streambed erosion. The loss of more sensitive (intolerant) aquatic species is often the direct result of water quality degradation (Davies and Jackson 2006).

Confidence in the metric is reasonably high. The data coverage and quality is high, and the metric is based on a studied set of calculations. Data for this index were collected by the MPCA for over 1,500 sites between 1996 and 2006. The Stream Species Quality Index was calculated for 705 sites where both fish and macroinvertebrates were collected in the same year at the same sites. Thus, there are extensive data available to calculate O/E scores. However, the O/E score only indicates whether an expected species was present, but does not depend on the abundance of species present at a site or whether a species is rare at a site. Rare taxa may have more specialized habitat requirements and exhibit higher sensitivity to environmental disturbances, and serve as early indicators to changes in water quality degradation or of the loss of particular habitat types (Cao et al., 1998; Cao and Williams, 1999).

In addition, Dolph et al. (2011) found that fish and macroinvertebrate assemblages indicated a concordant response in 17 of 25 watersheds. Both fish and macroinvertebrates are included in the index because the US Environmental Protection Agency recommends that two different taxonomic groups be sampled, and Rule 7050 in Minnesota State Statues requires that the MPCA evaluate two taxonomic groups to assess aquatic systems.

Although fish and macroinvertebrates have been assessed across the state, some watersheds have fewer assessments than others. Most assessments have been conducted in small streams within the 81 watersheds, because small streams represent 80-90% of stream miles within watersheds (Leopold et al. 1964) and most are “wadeable” by biologists. Thus, the condition of the larger rivers is less well represented. These data are collected from small stream reaches (less than 500 m in length) that may reflect conditions in a reach, which may or may not represent the conditions in the entire stream. The MPCA has developed a disturbance index comprised of eight variables designed to quantify the overall degree of human disturbance acting upon a stream site. Streams were designated as reference sites if disturbance scores fell within the upper 25% of scores for their ecoregion. The O/E approach predicts presence or absence of species based on prediction for sites that are classified as least impaired (reference sites). Because levels and types of human disturbance vary across Minnesota, reference sites were chosen to reflect the best obtainable condition in each ecoregion, rather than a single standard that could be applied to the entire state. Thus, a least impacted site does not necessarily represent an unaltered site. For example, a “least impacted” site with the highest score in a watershed could be in an area with extensive agriculture or in a suburban area with suitable habitat for a limited number of organisms. There can be a range in the quality of the reference sites that underlie the scoring, resulting in low expected values, and in turn inflating all scores, which may explain relatively higher values than expected in agricultural regions.

Additional data to bolster the assessments in watersheds with incomplete sampling would strengthen the assessment of Stream Species Quality.