How many physical structures (dams, bridges and culverts) are on stream systems in each watershed?

Structures (dams, bridges and culverts) on streams reduce the longitudinal and lateral hydrologic connectivity of the system. For example, impoundments above dams slow stream flow, cause deposition of sediment and reduce peak flows. Dams change both the discharge and sediment supply of streams, causing channel incision and bed coarsening downstream. Downstream areas are often sediment deprived, resulting in degradation, i.e., erosion of the streambed and streambanks (Staton et al. 2003). Culverts and bridges limit connectivity in a number of ways. They may constrict the channel resulting in impounded water, create pools and changes in the channel depth that are impassable to some fish species, and disconnect the stream from the floodplain 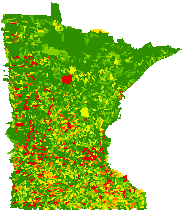 The number of culverts and bridges was calculated from the Minnesota Department of Transportation (MnDOT) culvert and bridge database. The number of Dams was calculated from the National Dam Inventory. The total count of structures was divided by the length of streams in the major watershed. A threshold value was calculated to create a maximum structure density that corresponds to a health score of 0. The threshold is equal to the 95th percentile of the structure density values, i.e., the 5% highest density values received a health score of 0. The remaining watersheds were linearly scaled from 0 to 100. Major watershed threshold value (95th percentile) = 0.77 structures per stream mile

The same data used for watershed level scores was used to create scores for DNR Catchments, with a slightly different approach. The number of bridges, culverts and dams in a catchment was divided by the average length of perennial streams and ditches in catchments up- and downstream of the scored catchment, within the major watershed. This smoothing algorithm corrected for skewed scores where catchments have very short streams.

The structure scores ranged from 2 to 100, with a significant number of watersheds with very low scores. Only a few watersheds along the Canadian border, with relatively low human population, had structure densities low enough to have little expected effect on aquatic connectivity.

The number of structures that modify aquatic connectivity in Minnesota streams is very high. The vast majority of watersheds score 20 or below indicating a high density of bridges, culverts and dams. Only the Rapid River (score 100) and the Rainy River (score 82) have few structures. The cumulative effect of these structures on a basin level, e.g., the Upper Mississippi, may be greater than the localized effect of each structure on hydrologic and biologic connectivity within each watershed.

Dams alter the natural regimes of flow and sediment. Dams convert the previously lotic (flowing) sections into the lentic (standing water) impoundments, resulting in increased sedimentation in the impoundments, and “clearer” discharges immediately below the dams. The clearer discharges are characterized with faster flow and less sediment load, with the enhanced ability to erode stream channels and banks. Clearer discharges can scour the fine materials and deposit them downstream. The scouring occurs because the flowing water can transport more sediment and compensates for the lack of sediment load by eroding the bank and bed of the stream channel. As a result, the channel slope and shape and the composition of the streambeds are modified.

Bridges and culverts narrow natural channels, and therefore increase the velocity of the water through or under them, which can scour and undermine the foundations of the bridge. The faster flow has a greater ability to scour the streambed and bank immediately below a bridge or culvert and are able to transport and deposit fine materials downstream.

Dams typically change the natural flow variability (see “Geomorphology” above). The water level upstream of the bridges and culverts will increase, and the added “head” is called afflux. The afflux varies with distance upstream and forms a backwater, similar to a small impoundment. The afflux and backwater profile increase as the bridge or culvert opening decreases. Bridges and culverts are built on floodplains and poorly designed bridges or culverts can cause or exacerbate flooding. Unless the constriction of the structure is severe, the flow gradually increases upstream and downstream of the structure but rapidly at the structure.

Floods carry debris, such as fallen trees, that may often wedge or cause a blockage at the culvert or bridge, which constricts the flow and increases the velocity. Significant damage may occur where the drainage above the obstruction is forested with trees having shallow roots on steep slopes. Blockage for small single-span bridges can be as much as 90% of the opening.

Dams convert the previously lotic sections into the lentic waters. Clearer water behind the dams often cause an increase in abundance of periphyton and rooted aquatic plants, which provides food and habitats for organisms, such as invertebrates, which are an important source of food for fish. The clearer outflows from dams can scour the banks and streambed that may reduce suitable habitat space for invertebrates and spawning areas for fish. Changing water levels due to dam operation implies unstable habitat conditions that are disruptive, especially for juvenile fishes and spawning adults that require stable, shallow water. In addition to the local effects of dams on the impounded section and downstream reach, dams reduce or remove upstream-downstream connectivity of the entire stream system. Dams can block the migration of fishes and other species that require different habitats during their life history.

Culverts often increase the water velocity in the spring, which may limit movement of small fish to spawning areas upstream of the culvert. The higher velocities may also scour the stream channel immediately below the culvert which may alter the water level, such that stream is lower below the culvert than above the culvert. The change in water elevation may act as a physical barrier to fish movement. Thus, structures on streams disconnect plant and animal populations from essential habitats, interrupt the upstream-downstream migration of fish and other species and limit distribution and interactions that affect biological connectivity. For example, dams may separate mussel populations from fish species essential for hosting their juvenile life phase, which reduce or eliminate the ability of the mussels to reproduce.

The sediment load, temperature and chemicals in the outflow from dams will change relative to the river or stream that flows into the impoundment. Many of the pollutants are held in the sediments of the impoundment, but can be resuspended repeatedly. For example, phosphorus, a nutrient critical for algae growth, can be resuspended by high winds or recreational activity, which may result in noxious algal blooms. Runoff from roadways with culverts and bridges may contain pollutants from vehicles that is transported into the water.

There is significant scientific literature that supports this index. Dams, culverts, and bridges modify hydrology, geomorphology, life history of aquatic organisms, and water quality. The River Continuum Concept – organisms change in the downstream gradient of a stream – was offered by Vannote et al. (1980). This concept implies that if the longitudinal connectivity is disrupted, the biological structure of the stream will be significantly altered. Streams with more connectivity (less road crossings) tended to have more fish species compared to other streams the same size, and the richness of warmwater species was most affected by road crossings that decreased connectivity (Diebel et al. 2009). Species with greater range of movement will have more impaired connectivity than those with smaller ranges. Road crossings can be barriers to aquatic organisms, preventing recovery of populations following disturbance or increasing the risk of extinction of isolated populations (Diebel et al. 2009). Blockage for small single-span bridges can be as much as 90% of the opening (Highways Agency, 1994). Bridges and culverts are built on floodplains and poorly designed bridges or culverts can cause or exacerbate flooding. Unless the constriction of the structure is severe, the flow gradually increases upstream and downstream of the structure but rapidly at the structure (Hamill 1999).

In a comparative study, McBride and Booth (2005) found that stream channel size, large woody debris (trees and branches), bank stability, structural complexity, and embeddedness improved when a stream did not have road crossings and flowed through an intact riparian buffer. McBride and Booth (2005) found that for consecutive sites with many road crossings stream conditions declined. In fact, when more than three road crossings per kilometer were present stream condition did not improve, even with an intact forested buffer.

Dams change both the discharge and sediment supply of streams. The sediment load, temperature and chemicals in the outflow from dams will change relative to the river or stream that flows into the impoundment (Stanford and Ward 1979). As a result, flows may become clearer, but prone to erode the channel bed and banks, producing channel incision (downcutting), coarsening of bed material, and loss of spawning gravels (Kondolf 1997, Staton et al. 2003). The clearer outflows from dams can scour the banks and streambed (Allan and Castillo 2007) that may reduce suitable habitat space for invertebrates and spawning areas for fish. Changing water levels due to dam operation implies unstable habitat conditions that are disruptive, especially for juvenile fishes and spawning adults (Freeman et al. 2001) that require stable, shallow water.

The effects of dams on hydrologic variation were largely consistent across regions in Minnesota in a study by Poff et al. (2006), with a decrease in peak flows, but an increase in near-bankfull flows, an increase in minimum flows, and a decrease in flow variability. Grenouillet et al. (2008) found that diatoms and highly dispersing fish were sensitive to fragmentation of stream systems by dams, whereas macroinvertebrates were not.

Dams vary greatly in their size, purpose and operation, and therefore differ regarding their impacts on rivers (Petts 1984). Culverts and bridges may have differential affects on streams and may be properly or improperly sized and designed structures. These differences in structural form and function are not considered in this index; specifically the impacts of dams, bridges and culverts are not differentiated or weighted based on potential impact. As well, the amount of the watershed and basin land area above each dam is not factored into the scoring. Finally, the National Dam Inventory only includes dams that exceed 6 feet in height and impound 50 or more acre-feet; smaller dams are not included.

The index accurately depicts the number of bridges and culverts and the number of larger dams in each watershed. However, as noted above the size, function, and design are not included. Thus, the index provides the potential impact on aquatic connectivity.

The impact of each structure type could be compared, and the scores ranked to reflect that difference. The percentage of the watershed located above the most downstream dam in that watershed could be added to the index. Further refinement could be done with more detailed inventory information of structures, such as appropriate sizing and condition of bridges and culverts and an inventory of dams less than 6 feet in height.