Does the watershed landscape provide the ability to connect quality terrestrial habitat patches in each watershed?

The size, shape, distance, and connectivity of areas of terrestrial habitat influence the productivity, accessibility and sustainability of the plant and animal populations dependent upon those habitats (Shisler et al. 1987, Robbins et al. 1989, Castelle et al. 1992, Keller et al. 1993, Friesen et al. 1995, Gibbs 2000). The connectivity of vegetation contributes to the persistence of species in a landscape, whereas impervious surfaces, such as roads or buildings, often fragment landscapes.

Impervious surfaces and fragmented landscapes change how animals, plants, and water move through a landscape. A connected landscape allows the movement of organisms for reproduction and maintenance of genetic diversity. It also allows organisms to relocate to suitable habitat if small amounts of fragmentation occur (Sutherland et al. 2000).

Assessment of habitat quality is complex because the capacity of a habitat to provide the necessary components for a species is species dependent. In other words, “good” habitat cannot be determined unless it is known which species can live there. 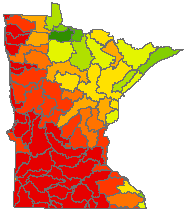 Thus, the Terrestrial Habitat Connectivity Index uses the different habitat needs of representative forest, wetland, and grassland species to determine whether remaining habitat configurations meet the needs of those particular species. The species selected and the habitat configurations used for this index are based on the methods developed for the Regionally Significant Ecological Areas (RSEA) modeling by the Minnesota Department of Natural Resources (MN DNR). The species used in the forest model included: the Red-Eyed Vireo, Wood Thrush, Scarlet Tanager, Ovenbird, Eastern Wood Pewee, Cerulean Warbler, Louisiana Waterthrush, and the Red-Shouldered Hawk. The species used for the grassland model included: bull snake, pocket mouse, and Blanding's turtle. 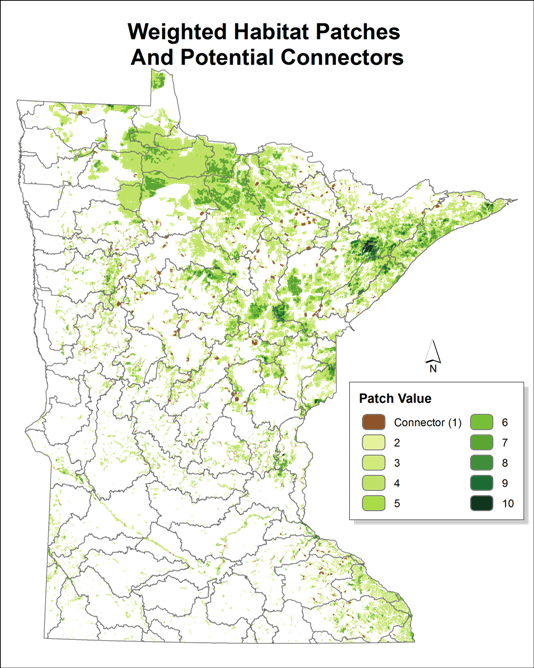 This index ranks the potential connections between patches of quality terrestrial habitat in each watershed based on habitat size, configuration, and intervening cover type. This index does not consider aquatic (stream and lake; see Aquatic Connectivity Index) habitat types, but includes wetland habitats.

The Terrestrial Habitat Connectivity Index builds upon the results of the Habitat Quality model to generate potential connections across the landscape between the identified patches of quality habitat. The first model generated patches of quality forest, wetland, and grassland habitat. These patches were ranked and combined into a composite habitat score. The Habitat Quality Index used land cover from the National Land Cover Data (NLCD; 2001) and National Agricultural Statistic Service (NASS) together with the Minnesota County Biologic Survey (MCBS) Biodiversity Significance data to identify and rank potential terrestrial habitat (See Appendix A: “Methodology for Conducting a Statewide GIS Ecological Assessment” for further detail regarding the data models.).

A second model was applied to the results of the first model to generate connectors between patches of habitat. Several iterations of modeling were completed to generate and map habitat connectors across the entire state.

The Terrestrial Habitat Quality model generated forest, wetland and grassland habitat patches with quality values of 1, 2, or 3. If a habitat patch was also identified in the County Biological Survey as an area of “biodiversity significance”, an additional value was added to that patch.

The total habitat and connector area was divided by the watershed land area:

Multiplying the watershed values by 100 created the final score. An equal interval method, linearly scaled from 0 to 100, was used to define levels of connectivity and display results.

Low scores for habitat quality are found throughout the southern half of Minnesota and the Red River Valley. For example, in central and southwestern Minnesota, amphibian species richness is reduced because wetlands are isolated and road density is high at several spatial scales (Lehtinen et al. 1999). There are some low scores in the north and north eastern part of the state where large expanses of forested land cover, wetlands, and lakes dominate the landscape.

There is a relationship between large tracts of perennial cover, wide riparian buffers and high water quality. Often the connections between patches of terrestrial habitat occur as buffers along waterbodies. These riparian habitats are especially effective at protecting adjacent water bodies by filtering contaminants, reducing erosion, and moderating temperature.

The patterns of historic land cover correspond directly with soil types and climate patterns of Minnesota. The geology and glacial history of the state greatly influence the location of expected habitat types and species (https://www.dnr.state.mn.us/ecs/index.html). The ecological setting is key to understanding the expected habitat and the degree to which the current landscape deviates from past conditions. Distribution of habitat patches, patterns of development and agricultural use are a direct response to the soils, topography and climate that have influenced the distribution of land use across Minnesota.

Connectivity of terrestrial habitat is directly related to the amount of remaining perennial land cover, as well as other land uses across the landscape. Areas with low scores, in most cases, have much less perennial cover, and more development, roads, and annual crops. These areas are likely to experience higher runoff and erosion, and reduced rates of groundwater recharge and less transpiration.

There have been a number of studies in Minnesota and other Midwestern states that have explored connectivity, size of habitat patches, and fragmentation relative to productivity, accessibility and sustainability of organisms. Species richness of 10 amphibians was reduced in urban and agricultural regions of central and southwestern Minnesota because wetlands were isolated and road density was high at three scales: 500, 1000, and 2500 meters (Lehtinen et al. 1999). Sutherland et al. (2000) examined 77 bird and 68 mammal species to determine the dispersal distances of young animals and found that most species only travelled short distances, which may have consequences for large-scale habitat alterations on connectedness between populations. Management of large, intact forest tracts was found to be important for Ovenbirds and other ground-nesting forest songbirds (Mattsson and Niemi 2006). However, forested area alone may not lead to increased nesting success for forest birds. Knutson et al. (2004) found lower nesting success where the available forests were fragmented by agriculture in southeastern Minnesota, southwestern Wisconsin, and northeastern Iowa. Manolis et al. (2002) also found that fragmentation was also important for ground nesting forest birds in north-central Minnesota; nesting success increased with distance from the nearest “clearcut” edge.

Animals capable of long movements may also require suitable habitat to maintain viable populations. Winter et al. (2006) examined the density and nesting success of three grassland passerine birds and found that local vegetation structure alone was important, but also depended on patch size, landscape, and region that contained the local vegetation structure. Mladenoff et al. (1995) evaluated the expansion of gray wolf populations in northern Wisconsin and noted that large tracts of public forest land and private industrial forest land were required to maintain a viable population. They also found that suitable habitat is highly fragmented along development corridors and may have been responsible for the limited expansion of wolves. Although, wolves can move long distances though unfavorable habitat they require high quality habitat to become established in new areas.

An extensive literature review was part of the original RSEA project for the metro area in Minnesota. This basic approach was applied to the statewide analysis as presented in the Terrestrial Habitat Quality Index, thus the literature that was reviewed for the RSEA effort serves to provide validity and importance of this index.

The relationship between habitat size, shape and distribution and quality of habitat for representative species is well documented and has been tested in many settings and the variables selected for defining the habitat needs based on cover type were investigated thoroughly in the RSEA model. The additional modeling done to generate habitat connectors is based on the “permeability” of the land cover types that are separating the habitat patches. These connectors are potential corridors between habitat patches and may currently be in use by plants and animals. The index illustrates whether a landscape has maintained the ability to become better connected in the future. Roads, municipal areas and other permanent structures are examples of land uses that disrupt connectivity. Cropland, harvested forests, and grazing lands would be less disruptive.

Given an inherent variability of conditions across the landscape, the maximum quality scores generated by the current model may vary based on ecological setting. These quality values could be used to score the current condition based on an attainable historical condition, such as with presettlement land cover, to generate a maximum quality value for comparison. Presettlement Land Cover was derived from the notes of the original Minnesota land survey, conducted circa 1895 by Marschner and is available from the Minnesota Department of Natural Resources Section of Forestry.

A land cover layer with greater resolution would enhance the models, but given the size and complexity of the computations, would only be beneficial when greater computer power becomes available. An estimate of an unaltered (or expected) habitat condition could be added to the index by modeling the historic landscape condition. A watershed-specific historic habitat quality value could be used as a comparison to score the current condition.

The available data provides consistent coverage across the state, but could be improved by including the Biodiversity rankings for the sections of Minnesota that are incomplete.