What does the Geomorphology score show?

When the three geomorphology index scores are combined, they reveal a pattern of lower scores along the eastern and western borders of Minnesota. The steep slopes of eastern Minnesota, and the dry climate pattern of western and northwestern Minnesota are the primary drivers of the overall component results.

Although it may mask extreme values in any one index, the mean serves to illustrate an overall gradient in results. The mean can also be used to compare watersheds, such as watersheds that are upstream or downstream within the same basin. 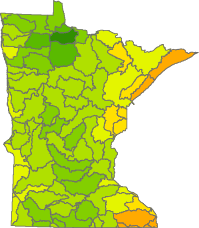 Both the mean and minimum geomorphology index results show a pattern of lower scores in eastern and western Minnesota, with higher scores on a north-south line through central Minnesota.  Viewing the three input indices together reveals which index in contributing to these patterns.

The Soil Erodibility index uses a scale based on soil type and slope; therefore, shows the soils that are most naturally vulnerable to erosion are in the northeast and the southeast.  This index does not measure factors that can displace soils such as wind, water or land use practices.

The Pollution Sensitivity of Near-Surface Materials index scores show that groundwater is very susceptible to contamination in the southeast, with fairly high vulnerability existing throughout much of Minnesota.  Only the northern tier of watersheds showed consistently lower vulnerability.

The Geomorphology indices are context indices. They measure existing, inherent vulnerability to degradation based on the geology and geographic location of a watershed.

The Geomorphology mean follows a pattern of low scores (high vulnerability) along the western and eastern borders of Minnesota. This result is largely driven by the Climate Vulnerability Index which scores the range of moisture balance conditions across the state on a scale of 0-100. It is likely that the influence of this index is over-stated given the large range of values, and the lack of information available on the relative importance of this index.

The Pollution Sensitivity of Near-Surface Materials results follow the pattern of vulnerable soil types and geologic formations on a general line from southeast to north central Minnesota. The lowest scores fall in the karst region of the southeast blufflands. A more detailed pattern of pollution sensitivity can be viewed on the index page; which shows that northwestern watersheds have a narrow band of very vulnerable geologic area that is not well represented by the major watershed scale results.

The geomorphology story is incomplete.  The current three indices reveal areas of vulnerability across the existing landscape, so should be used as a health context to be considered before taking action.  To refine this component, a condition index could be added.  The index being considered would measure stream and valley type, which would assess stream stability by evaluating stream shape in relation to valley type.

In addition, the existing index values could be refined in several ways: