Where are there steep slopes near streams in Minnesota?

Why is this important for geomorphology?

Soil is dislodged and moved by water, often reaching Minnesota’s streams, lakes and wetlands. This is a normal, ongoing erosional process. When soil reaches a water body, it is called ‘sediment’. When sediment levels are higher than a stream can naturally carry, an imbalance occurs as the stream attempts to move and redeposit the excess sediment.

Steep slopes near streams create a risk for excessive erosion. In Minnesota, rivers with high levels of sediment like the Nemadji River and the Le Sueur River, also have a high density of steep slopes near the stream channel. Several studies that focused on the source of sediment in these watersheds have shown that 45 to 70% of the sediment comes from bank and bluff erosion (Gran et al., 2009; Day, Gran, Belmont & Wawrzyniec, 2012; Riedel, Verry & Brooks, 2005; MPCA, 2017).

Steep slopes are susceptible to soil mass movement events. When mass movement occurs adjacent to streams, large quantities of soil are quickly mobilized by moving water, creating large contributions to the sediment load at intermittent times (Brooks, Folliott & Magner,2013). The risk of mass movement increases when there is a high density of steep slopes near streams. 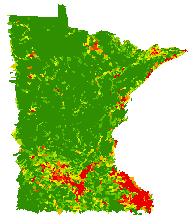 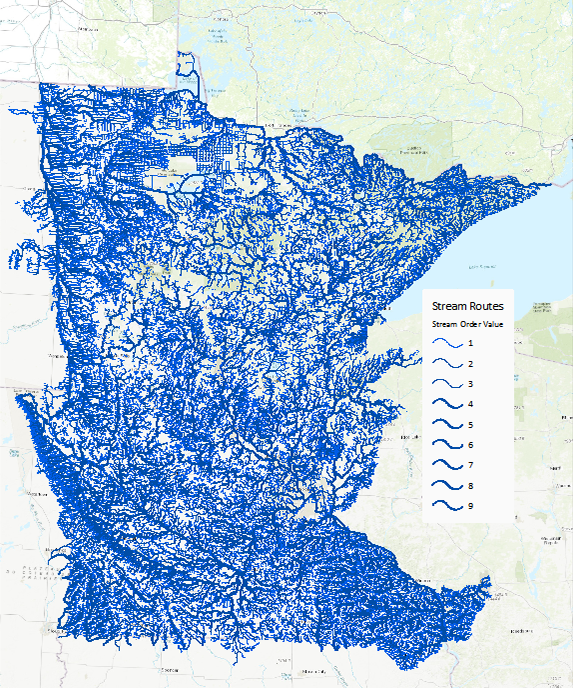 30 meter buffer of streams with a Strahler Stream Order ≤ 3 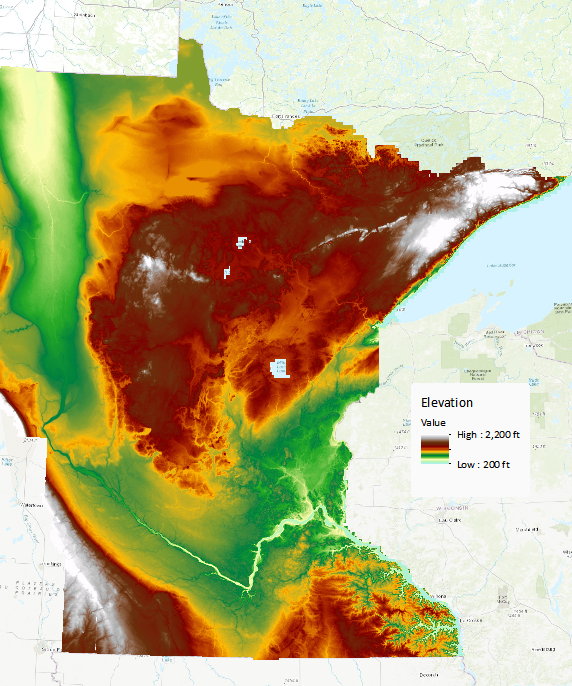 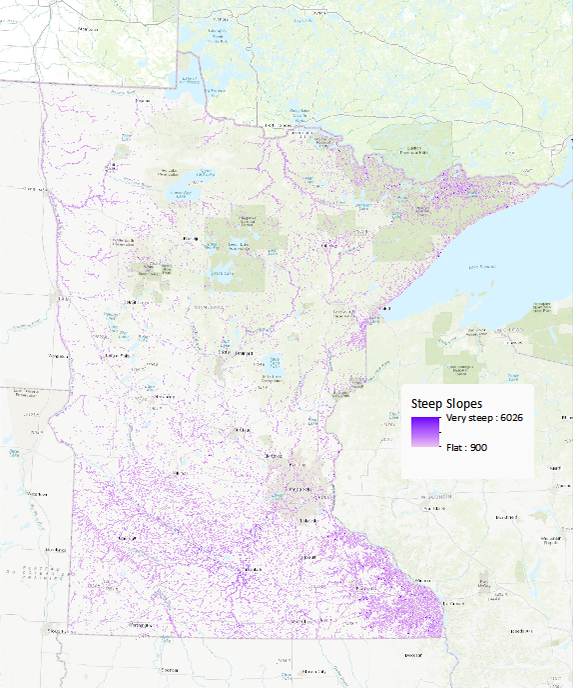 Create an index of the density of steep slope area near streams within each catchment, and within each major watershed. For this index, the major and catchment scoring approach is the same. This analysis approach is based on work by Gran, et al. 2016, in the Sediment Budget for Greater Blue Earth Basin.

The Minnesota LiDAR DEM 3m elevation grid is used to analyze patterns of topography statewide. Steep slopes are defined as cells that have a 3 meter elevation change within a 3x3 cell neighborhood.

To determine which steep slopes are ‘near stream’, the streams are partitioned into two groups using their Strahler stream order number*. The ‘near stream’ distance is determined differently for each group:

Step 3: Calculate the surface area of Steep Slopes near Streams

The distribution of density values for all watersheds in the state are used to identify the 95th percentile value, which is used as a minimum index score threshold. A threshold is used because the distribution of density values is skewed by very high outliers. The 95th percentile value is used to set a maximum density, any watershed above that density value automatically receives a health score of 0. For the remaining watersheds the health score is calculated using a linear inverse scaling.

The following formula is used to rescale raw density values to the derived index score value:

*Strahler Stream order is a classification system that identifies where the stream is located within the larger network. First order streams are the headwaters, and the ‘order’ number increases as tributaries are added and the stream increases in size and flow volume moving downstream.

This index ranks the risk that erosion from steep slopes will impact streams in Minnesota. The results are driven by steep slopes found in close proximity to streams. These conditions are prevalent in south central and southeast portions of the state, as well as northeast Minnesota. Steep slopes near streams can also be found in other more dispersed areas, such as watersheds contributing to the Red River and the Rainy River.

The pattern of risk of high sediment levels in streams shown by this index is consistent with measured high sediment loads. While the risk level is the result of natural conditions, the land use and level of hydrologic alteration should be considered when determining whether locations with high risk are likely to create sediment that reaches the stream. 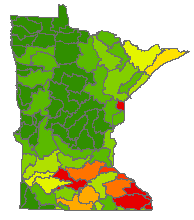 Many streams in Minnesota do not meet the Water Quality Standards because they are impaired by too much sediment. Steep slopes near streams may help scientists evaluate where to concentrate efforts for identifying sediment sources.

Land use and management choices directly affect erosion by changing the hydrology of the watershed and the physical properties of the channel system itself (Brooks et al., 2013). Some examples of drivers affecting the hydrologic cycle are land use conversion, wetland removal, wide-spread use of tile-drains, and increased precipitation (total precipitation, and frequency of large rainfall events).

The dramatic changes in hydrology throughout Minnesota has led to an increase rate of bank and bluff erosion. Altered hydrology produces rapid changes in flow volume which act on steep slopes to further exacerbate erosion rates.

High sediment loads in a stream reach can create a barrier for aquatic life. Excessive sediment will limit access to the stream network, forcing some species to abandon habitat areas upstream or downstream of impacted reaches.

There is significant scientific literature that supports this index. Numerous studies show that steep slopes near streams indicate areas with a higher risk for erosion and sediment entering streams.

In the Lake Superior River Basin, the Nemadji River (near Duluth) contains the highest suspended sediment load per square km of drainage area. In this system, mass wasting is common. Sedimentation rates have increased since the1880s, believed to be caused by intensive timber harvesting in late 1800s and associated channel straightening and cleaning. (Brooks, et al, 2013) A high density of steep slopes near streams are consistently found in those rivers with the highest sediment loads. In studies of the Blue Earth and Le Sueur Rivers, bank erosion has been shown to contribute 48 to 79% of the measured Total Suspended Solids (TSS) and 40 to 49% of total Phosphorus. Additionally, the Greater Blue Earth River Basin contributes 55% of sediment load to the Minnesota River at Mankato while containing only 21% of the watershed land area. (Payne, 1994)

This index uses high quality LiDAR derived elevational data to identify steep slopes that are located near streams in Minnesota. The approach is well document and supported, and the data quality is very high. The importance to steep slopes to the erosional process, and their role in providing a source of sediment is well documented and supported. Confidence in the calculation process, data inputs are very high. Confidence in the importance of this factor in influencing watershed health is also very high.

Steep slopes are selected based on their proximity to streams, but the best available stream line data has some limits to accuracy. In some cases, the stream center line is not at the center of the water feature and some streams are not mapped. Improved stream line accuracy would benefit this index calculation. For large rivers, this index could be improved by creating buffers from the stream bank rather than from the river centerline.

Another potential enhancement would exclude slopes that have bedrock at the surface; bedrock data was not available at an appropriate scale and resolution to incorporate into the original analysis.

This index does not quantify the amount of sediment eroded from steep slopes. Measuring bank retreat over time would provide a better measure of the quantity of sediment being contributed to streams.

Resistance to mass wasting is determined by factors not included in this analysis including vegetative cover, soil characteristics, and strength and distribution of underlying bedrock. Including these factors would better assess the risk from these events.