How do stream flow patterns (hydrologic regimes) vary across Minnesota?

Water flow is a basic characteristic of any aquatic system. Flow rates and variability are key determinants of the health of most watersheds and the main driver of watershed ecology (Annear et al. 2004). The hydrology of a system can be described by five ecologically important characteristics of the flow regime (Poff et al. 1997):

River ecologists recognize the importance of the entire flow regime and the full range of natural flow variability (Poff et al. 1997, Lytle and Poff 2004, Mathews and Richter 2007, Poff 2009). The flow regime of a stream influences the kind and number of aquatic species, the size and shape of a stream channel, groundwater exchange, and the frequency and intensity of floods. 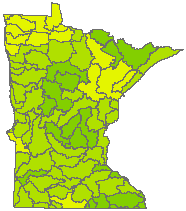 For more information on the list of IHA parameters (Table 1 [68 kb]) refer to the Indicators of Hydrologic Alteration Version 7 Users Manual. For scoring method 1, values larger than the 50% confidence interval are preferred and receive a three, while method 2 is the opposite, a value lower than the confidence interval is more preferred and receives a three. For method 3, either extreme value larger or smaller than the confidence interval, is least preferred and receives the lowest score. The Indicators of Hydrologic Alteration User's Manual describes Group 1 parameters as: magnitude of monthly water conditions; Group 2 as: magnitude and duration of annual extreme water conditions; Group 3 as: timing of annual extreme water conditions; Group 4 as: frequency and duration of high and low pulses; and Group 5 as: rate and frequency of water condition changes.

The 33 IHA variables were estimated using mean daily discharge for 1986 through 2007 obtained from the USGS for each of 54 stream gages located throughout Minnesota (Table 2 ). Each gage represented the condition in at least one watershed, with only one gage representing each watershed. The 33 IHA parameters were calculated for each gage and each calendar year. IHA parameters were calculated using the Indicators of Hydrologic Alteration software version 7, (The Nature Conservancy 2007).

The observed IHA variables were not scored directly, due to the influence of drainage area and weather conditions during the period of record. Because watershed area and precipitation controls much of the scoring variability, area was calculated for the contributing areas above each gage, and available precipitation time series were obtained from the U.S. Department of Commerce, National Oceanic and Atmospheric Administration, http://www.cdc.noaa.gov/cgi-bin/data/timeseries/timeseries1.pl.

Differences in drainage area and monthly precipitation among the gages and years were accounted for by a fixed-effects model and scoring the regression coefficient representing each stream gage. The coefficient for each stream gage and each variable was scored a 0, 1, or 2 based on whether the score was within, greater than or less than the 50% confidence interval of the mean coefficient. The scoring method for each variable is described in Table 1.

After scoring each variable, a group (i.e., each of the five groups of variables in the IHA) score was calculated as the sum of all scores within the group divided by the maximum possible score times 100 (see Table 1 for variables and group assignment). The final watershed score for hydrologic alteration was the average of the five group scores.

Scores for important characteristics ranged from highly variable for magnitude of monthly discharge, magnitude and duration of annual discharge, and rate and frequency of change, to little variability for timing of annual extreme weather conditions. The overall average score for hydrologic variability indicated that most watersheds are altered, but the magnitude of the alterations is relatively minor. Scores for individual parameters can be found in Table 3 (Table 3 ).

The composite ranking (average of five group scores), identified two clusters of watersheds that scored in the moderately impacted category, one in the northwest and one in the northeast. The watersheds in the northwest scored lower due to low monthly discharge, whereas watersheds in the northeast received low scores because of high variability and extreme conditions. The remainder of the watersheds generally scored between the least and moderately impacted ranking. Interestingly, no region of the state consistently scored as severely altered for multiple categories. Despite the generally moderate scores for the composite flow variability score, there were watersheds identified as heavily impacted based on specific hydrologic descriptors.

Hydrologic flow variability plays an important role in the transfer of energy between the floodplain and stream channel, and is an integral factor influencing the plant species distribution in riparian areas (Hupp and Osterkamp 1985, Auble et al. 1994).

Hydrologic variation represents natural disturbances in rivers, affecting species dependent on periods of both drought and flood to maintain diverse habitat for all aspects of their life history (Lytle and Poff 2004). The magnitude of the stream flow directly controls key habitat conditions, such as depth and velocity, for many aquatic species (Gorman and Karr 1978, Meffe and Sheldon 1988, van Snik Gray and Stauffer 1999). Flow variability also indirectly influences habitat conditions by moving sediment and organic debris through the system (Poff et al. 1997, Bunn and Arthington 2002).

The role of hydrologic variability in sustaining river ecosystems is well established (Poff et al. 2006) and modification of stream flows is considered a threat to global freshwater biodiversity (Dudgeon et al. 2005). Streamflow has been characterized as a ‘master variable’ that influences fundamental characteristics of stream ecosystems (Power et al., 1995, Poff and Zimmerman 2010). The concept that the natural flow regime, and not a single identifiable flow, is important to aquatic species and channel processes was developed and examined by many authors (Poff et al. 1997, Bunn and Arthington 2002, Trush et al. 2000). High and low flows are important in movement, channel shaping, substrate composition, primary production, trophic and population structure, and energy and mass cycling through ecosystems, and there have been recent attempts to synthesize studies and draw quantitative predictions of ecological responses to changes in flow regimes. Richter et al. (1996) introduced the Indicators of Hydrologic Alteration as a method to assess hydrologic variation.

A recent synthesis looked at a range of studies, methods, and indices of flow regime and response (Poff and Zimmerman 2010). A wide range of responses were found to flow alterations, by fishes, riparian vegetation, and macroinvertebrates, with some taxa consistently responding negatively (fishes), and some lacking consistent patterns of change to changes in flow regimes ( i.e., macroinvertebrate or riparian species increasing or decreasing in relation to increases in flow variability) when comparing studies across broad areas.

The use of indicators of hydrologic alteration is strongly supported in the literature (e.g., Poff and Zimmerman, 2010, and references therein), and the underlying USGS stream gage data are of high quality. However, the specific indices applied here, and their connection to system function, natural capital, and goods and services rendered by healthy aquatic systems are generally, but not specifically supported by research. As noted by Poff and Zimmerman (2010), natural flow regimes vary across space and time, and are controlled by terrain, vegetation, underlying geology, and location within a catchment, among other factors. Natural sediment and nutrient loads depend on these spatial controlling factors. Plant and animal communities have evolved and self-organized in response to natural regimes, and have been altered in most landscapes due to human intervention at a number of scales. Unfortunately, there are very few examples of watercourses under “natural” flow regimes against we may compare to streams with alterations, and none, even at the smallest branch, for some regions, and for larger branches in all regions. The measurements of change in system function or values due to change in flow variability are then difficult to make. While these indices have proven useful in careful studies in other areas, and some literature supports the application of these methods in the upper Midwest (e.g., Allan 2007, and references therein), confidence will improve with specific application and evaluation in Minnesota.

The index could be improved by increasing the number of flow gages, by continuing measurements at existing gages to create a longer time record, and by specifically comparing flow variability to important biotic, physical, and chemical variables within the differing eco- and geomorphic regions in Minnesota. Specific knowledge on the impacts of flow variability on hydrospheric variables could be identified.

The Flow Variability Index compares flow regimes across Minnesota, but the period for a full complement of stations was limited to 1986 through 2007. Temporal or long-term changes within a watershed can only be imperfectly evaluated across this short time record. Longer term trends could provide valuable information related to the landscape changes within watersheds across the state, or climate changes.

The current sampling network is sparse in portions of Minnesota, and adding stream gages would make this index more robust. Data from 54 stream gages were analyzed, and the drainage area of the gages ranged from 84 to 6140 with a mean of 1293 square miles. Streams form with as little as a few acres, and more than 98% of stream miles in Minnesota drain less than 10 square miles, therefore small streams were under-represented. Gages distributed across a range of stream sizes, while filling the geographic gaps, would be a significant improvement.

Further study to directly tie specific, quantitative measures of flow variability in Minnesota would improve this index. Aquatic system structure and function is altered by a set of often co-varying alterations to the landscape, including land use change that alters impervious surface, runoff chemistry, sediment inputs, stream flashiness, and flow regimes, primarily through impoundments. It is often difficult to control for confounding factors, thus changes in flow variability may be masked by other co-occurring changes. The Nature Conservancy maintains of database of IHA applications (http://www.nature.org/initiatives/freshwater/files/iha_apps.pdf), so these projects could be monitored and results incorporated into improve the index as warranted.