What level of risk do impervious surfaces pose in this watershed?

Impervious surfaces are roads, buildings, parking lots, and other surfaces that water cannot easily penetrate. In many natural systems, most rainfall infiltrates into the soil, and slowly moves to streams, springs, or aquifers. Impervious surfaces prevent infiltration, lead to increased water flow on the surface of the land, and much more rapid flow into streams. Peak floods become higher and dry-season flows lower, as streams become “flashier” (Schoonover et al., 2005).

In many natural systems, most of the rainfall infiltrates into the soil, then slowly moves through saturated soil to streams, springs, or aquifers. This infiltration serves to buffer the speed of stream flow increases during large rain events, and meter out the subsurface flow during dry periods (Ziemer and Lisle, 1998; Poff et al., 2006). 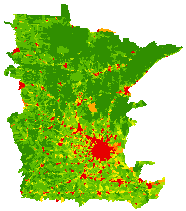 In contrast, impervious surfaces prevent infiltration, lead to increased water flow on the surface of the land, and much more rapid flow into streams. Peak floods become higher and dry-season flows lower, as streams become “flashier” (Schoonover et al., 2005). High flows degrade stream channels by incision or downcutting, increase scour and increase the amount of sediment carried by the stream (White and Greer, 2006). High flows also lead to greater bank erosion, as well as increased upland gully erosion, particularly at pipe outlets. Organic and inorganic pollutants are deposited by vehicles and from the atmosphere onto impervious surfaces where surface runoff often carries them directly to streams. These various impacts lead to subsequent changes in the diversity and abundance of stream flora and fauna (Wang et al., 1997; Wang and Kahehl, 2003; Lyons 2006; Schiff and Benoit, 2007).

Impervious cover was estimated using Landsat satellite images satellite imagery as the primary data source, circa 2011 (Xian et al., 2011). These data were developed by the Multi Resolution Land Characteristics Consortium (MRLC), and are available for download from the MRLC website. The data represent imperviousness as a percent of land area that is covered by impervious surfaces.

The overall average imperviousness was calculated for each watershed. Open water areas were masked out of the analysis. Zonal statistics (mean) values of impervious cover were calculated using the watershed boundaries as zonal features. A threshold of 4% imperviousness was used because this is generally the level below which stream chemistry, biota, geomorphology, and other stream characteristics are indistinguishable from undisturbed streams (Paul and Meyer, 2001; Morse et al., 2003).

Impervious surface values are low for a large majority of the DNR Catchments in the state. Not surprisingly, lowest scores (greatest amount of impervious surfaces) were concentrated in the Twin Cities metropolitan area, with a notable extension through the highway 10/25-52/94 corridor through St Cloud, and from there north through Brainerd, and west towards Wilmar. The lowest score was found in the Minneapolis/St. Paul area watershed. The DNR Catchments in and near Duluth and Rochester are also substantially affected, but the level of development in other regional population centers has also surpassed the threshold in some catchments, e.g., Fargo-Morehead, Bemidji, Grand Rapids, Virginia, Albert Lea, Alexandria, and Mankato. When averaged over the HUC-8 boundaries, these locally high impervious areas reduce scores only slightly, except in the metropolitan area.

As expected, greatest proportions of impervious surfaces are in the primary population centers of the Twin Cities Metropolitan Area, with secondary levels found surrounding Duluth, Rochester, and St. Cloud, and transportation corridors connecting them.

Mapping impervious surface from satellites has been shown to be accurate across a range of conditions and satellite platforms (Yuan and Bauer, 2007), with high accuracies reported at the watershed scale, and further work has shown high correlation between levels of satellite-estimated impervious surface and declines in stream quality (Slonecker et al., 2001; Snyder et al., 2005). High flows related to impervious areas result in bank erosion and can significantly change the mean bankfull depth and width of a stream (Goldstein et al. 2007). The width and depth of steam channels adjust in response to long-term changes in sediment supply and flow regime (Walsh et al. 2005). Increased imperviousness generally results in channel widening (Montgomery and Buffington 1998), regardless of the presence of a forested riparian buffer (Hession et al. 2003).

Reduction in channel complexity and instream habitat is a universal symptom of urbanization. For example, McBride and Booth (2005) found that physical stream condition improved with decreasing urbanization for channel size, retention of large woody debris, bank stability, complexity of habitats, and embeddedness. Similarly, Schoonover et al. (2005) found that the streambed of urban channels eroded approximately 20 cm every 6 months, whereas streams from other land uses remained stable or redistributed and stored sediments within their cross-sections. This rapidly changing stream morphology was due to increased runoff and erosion encouraged by urban development. Streambank and streambed erosion reportedly occurs between 10-20% impervious cover (Gergel et al. 2002), however geomorphic changes, such as channel widening, can occur with as little as 2-10% impervious area (Booth and Jackson 1997). Roaded areas accentuate surface erosion and have even greater erosion rates than previously forested clear-cut landscapes (Beechie et al. 2005). Roads act as conduits for sediment transport to nearby lakes and streams and their presence is a good indicator of suspended sediment in the water (Coats et al. 2008). Impervious surface areas have been shown to affect stream invertebrate and fish communities (Paul and Meyer, 2001; Morse et al., 2003; Wang et al., 2003), and increased impervious surface has been associated with decreased quality of hydrologic, chemical, and biotic characteristics of streams (Townsend, 1997; Weller et al., 1998; Wang et al., 2001).

This metric is strongly supported, resting on a well-developed theoretical foundation, with strong theoretical support in the technical processes of generating the base data and index and empirical tests of its application. There is a broad set of studies connecting changes in ecological, chemical, and physical characteristics of water bodies as a function of impervious surface, across the world, in North America, the upper Midwest, and within Minnesota.

Data quality in forming the metric is very high, with relatively recent, high resolution data used to develop a map of impervious surfaces.

New NLCD data (released May 2014) allowed calculation of trends over time based on comparable 2001, 2006 and 2011 NLCD Imperviousness values. The calculation of impervious trend data over this time period has been completed and is available through the online map for the catchment scale.  It is currently available as GIS data format by downloading WHAF data from the MNGeo Data Commons.