How much of the land area in each of Minnesota's watersheds is covered in perennial (year-round) vegetation?

The amount of vegetation covering the land surface affects the way water moves and is used across the entire landscape. The presence of vegetation influences many aspects of the hydrologic cycle including: 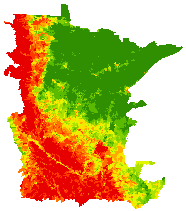 Loss of perennial vegetation affects both surface characteristics and plant transpiration rates. Perennial vegetation is frequently replaced by annual crops or developed surfaces, both of which are much less efficient at absorbing and utilizing rainfall, resulting in larger peak and total flows. Bare-soil cultivation exposes the surface to rainfall impacts, generally resulting in soils that absorb less rainfall, more slowly, which leads to greater and faster runoff.

Runoff from developed surfaces travels faster than from cultivated areas. Integrated annual transpiration rates are typically lower for annual vegetation and developed areas. With less vegetation in a watershed to hold and process water, the hydrologic cycle changes to accommodate shifts in surface water runoff and infiltration. Water flows with greater force, causing erosion and entraining more sediment, and higher contaminant loads are released from annual cropland and developed land.

Current perennial cover was derived from the Multi-Resolution Land Cover Consortium (MRLC) 2016 National Land Cover Dataset. The MRLC is a partnership among federal agencies to develop uniform, documented, high-quality land cover data for the U.S., based on satellite images.

Open water features, barren land classes and rock outcroppings were removed from each data set, and landcover was aggregated to annual or perennial classes to calculate a total area of perennial cover. The resulting percent remaining perennial vegetation was used as the index value.

The health score for perennial cover is the percent of the watershed land area that currently has perennial cover (based on the 2016 National Land Cover Data). The land cover classes considered to be perennial vegetative cover are: forest, shrub, grassland, pasture, and woody wetlands.

The percent perennial cover generates a potential range of values from 0 to 100. This percentage was used directly as the index score value.

Numerous studies have found a direct relationship between the amount of perennial cover and improved water quality. An equal interval method, linearly scaled from 0 to 100%, was used to define levels of impact and display results.

This health index is available as a time series of values based on earlier versions of the NLCD National Land Cover Data. Index Values for Perennial Cover in 2006 and 2011 are delivered in the WHAF online map.  Additional Perennial Cover index values (2001, 2004, 2008, 2013) are available by downloading the Watershed Health Assessment GIS Data.

Viewing catchment level results reveals a pattern of important corridors of perennial cover in the riparian zones around major rivers, particularly the Minnesota River. This level of detail also reveals that many watersheds with scores in the middle range show a gradation of perennial cover within their boundaries. In the Red River Basin, it is the headwater areas that have more vegetative cover, with less vegetation moving toward the river. In the lower Mississippi Basin this trend is reversed. The headwater uplands are cultivated and the blufflands near the river hold more forested cover.

Perennial vegetation has been eliminated from much of western and southern Minnesota, primarily through conversion to agricultural land uses. This high proportion of converted land use is largely due to the combination of rich soils, low relief, and drainage, making land accessible for farming. Most other areas of the state lack at least one of these three characteristics. The watersheds with greater relief, such as those along the Mississippi River, have more remaining perennial cover due to their steep slopes that are less suited for farming and development. The north central and north east part of Minnesota have retained much of their perennial cover, due to shallow, rocky, or sandy soils, or large bog and wetland complexes that are difficult to drain. These features reduced the rate of conversion to farming.

Urban and suburban development removed additional perennial vegetation. Although the impacts cover a small area of Minnesota they are dominant in watersheds near the Twin Cities Metropolitan area. However, urban landcover is generally less than 20% in the most affected large watersheds.

The highest percentages of perennial vegetation are in the largely forested northeastern portion of the state, through the central and eastern portions of the state, including substantial grassland in the Pine Moraine and Outwash Plains of eastern Becker County and the Mille Lacs Uplands in eastern Chisago County.

A high percentage of perennial vegetation does not imply that vegetative communities are those that were present historically. This index simply quantifies how much perennial vegetation is on the landscape now. Much of the forested regions of northeast Minnesota have been harvested, some farmed and abandoned to forests, and some affected by higher or lower fire frequencies, invasive species, or other non-natural disturbance regimes. These alterations undoubtedly will have changed perennial vegetation composition and structure.

Vegetation provides documented corridors for dispersal for a broad range of terrestrial organisms, and so conversion affects connectivity, particularly for less mobile organisms. Impacts are greatest for terrestrial organisms, but because near-stream conversion also may affect temperature, sediment, and other important aquatic variables, stream segments may have reduced connectivity.

When perennial vegetation is removed, it is most often replaced by annual plants and human development. As a result, higher runoff rates carry more nitrogen, phosphorus, sediment and other contaminants to waterways. For example, 71% of runoff from southern Minnesota croplands occurs April, May, June when the land is bare.

A landscape with perennial cover provides a continuous mosaic of habitat and is more likely to provide for the life cycle needs of diverse plant and animal species. Small patches of perennial habitat within a landscape dominated by annual crops or human development limits species richness and abundance.

There is strong support for this index, with causes, impacts and mechanisms identified in studies in Minnesota, the region, and the world.

Numerous studies have documented the impacts of forest cutting on stream and lake hydrology. For example, Detenbeck et al. (2000) found an exponential increase in peak snowmelt runoff as landscape clear-cut approached 50%, and Verry (1983), working in northern Minnesota, documented rainfall increased peak stream discharge by 250% for two years after clearcutting, then decreased toward precutting levels as forests regenerated. Storm flow peak water heights and flow volume doubled. In another study, Detenbeck et al. (2005) showed 10% reductions in forest cover lead to similar increases in water yield. Clearcutting may cause water tables to fluctuate, ranging from 9 cm higher to 19 cm lower than in peatlands with mature forests, and increases streamflow from upland forests in Minnesota by 30 to 80% (Verry, 1986).

There is ample literature documenting that conversion to agricultural land uses substantially affects stream hydrology. For example, Fitzpatrick et al. (1999) combined geomorphic field evidence with hydrologic and sediment-transport modeling to show that historical clear-cut logging, followed by agricultural activity, significantly altered the hydrologic and geomorphic conditions of North Fish Creek in Wisconsin. The upper main stem channel bed degraded (eroded downward) at least 3 meters and the channel capacity at least doubled after European settlement. The post settlement sedimentation rate on the flood plain and in the channel was 4-6 times higher than pre-settlement rates. Knox (1977) found that the conversion of natural land cover to agricultural land uses in the Platte watershed of southwestern Wisconsin caused a three to fivefold increase in the magnitudes of 1-5 year floods. Cultivation leads to loss of natural cover that intercepts rainwater and protects soil from erosion and leads to a reduction in soil infiltration capacity. The introduction of corn into the Platte watershed initiated a period of severe runoff and soil erosion beginning in 1870 and extending through the 1940s. Discharge estimates are 480 cfs for the present day channel, which is more than double estimates of 1830s discharge of 225 cfs. Udawatta et al. (2008) concluded that prairie restoration decreases soil bulk density parameters, indicating increased soil water infiltration. The observed bulk density of the native prairie was 84% of the cropped sites. In another study, Schilling et al. (2008) has documented how historical land use change has impacted the annual water budget in many Midwestern basins by decreasing annual evapotranspiration and increasing streamflow and baseflow.

Urban development also strongly affects stream hydrology. Runoff from developed areas has increased and groundwater discharge has been shown to decrease as replacement of vegetation with development reduces infiltration (Lin et al. 2008). In that study, land use change increased estimated peak differences in streamflow, surface runoff, groundwater discharge, and streamflow variability. Modeling studies support observations of conversion to urban and agricultural land uses. For example, Allan et al., (1997) used a model on the Saline River to demonstrate that increasing urban or agricultural land cover, at the expense of perennial vegetation, led to substantial increases in peak and total streamflow.

This metric is strongly supported, resting on a well-developed theoretical foundation, with strong theoretical support in the technical processes of generating the base data and index and empirical tests of its application. There is a broad set of studies connecting changes in ecological, chemical, and physical characteristics of water bodies as a function of perennial cover in the contributing watershed. These studies have taken place across the world, in North America, the upper Midwest, and within Minnesota.

Current statewide data are generally of high quality and spatial resolution, and pre-settlement data, although coarse-scale, are adequate because nearly all native vegetation communities were perennial, and frequent, large-area disturbances did not change soil infiltration capacity, had ephemeral impacts, and/or left substantial canopy or intact surface cover.

Classification accuracies for current landcover are typically above 90% for aggregated categories, such as perennial vegetation, annual vegetation, and urban development, accuracies could be improved, both by more current data, and by improved methods. Landcover is currently mapped for 30 meter (100 foot) cells, based on circa 2001 images. Newer methods that use multi-date, higher spatial resolution images may provide more accurate landcover classification, particularly for distinguishing grasslands from cereals and other row crops.

This health index has been recalculated to generate catchment scale results over time using NCLD for 2001, 2006 and 2011. These results are available for download as GIS data through MNGEO Data Commons and will be delivered through the online WHAF web map.