How much available water storage has been lost in the watershed since European settlement (1890-1900)?

Natural hydrologic storage consists of lakes and streams, wetlands, ponds, and other depressions that hold water for some period. Hydrologic storage has been altered by many human activities such as wetland removal, ditch construction, stream rechanneling and tile drainage.

These activities affect the way that the landscape stores and releases water (Detenbeck et al., 1993; Hey and Phillipi, 1997; Staton et al., 2003; Kroger et al., 2008). These human activities to alter landscapes for other uses have come at the costs of increased peak flows, lower base flows, and increased nutrient and sediment concentrations in streams, rivers, and lakes (Mitch and Gosselink, 2007). Water quality usually is degraded when storage is removed, and improved when storage is added (Zedler, 2003; Kovacic et al., 2006; Mitsch and Day, 2006). 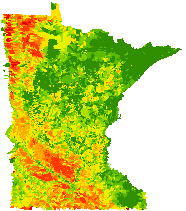 This index combines two underlying metrics that represent two different ways in which hydrologic storage has changed. The first metric compares the current extent of wetlands to the historic extent. The second metric compares the length of altered or straightened streams to the total length of stream.

The surface area extent of pre-settlement water storage was approximated using the 'hydric' soil attribute; a soil series is classified as hydric if it is saturated at the soil surface for a long enough time period during the growing season to create anaerobic conditions. When available, the SSURGO (county soil survey) was used for soil hydric class presence. STATSGO (state soil survey) is a coarser soil survey and was used to supplement the SSURGO data where full coverage did not exist. The DNR Hydrography data set was used to modify the SSURGO/STATSGO hydric soils layer. Surface area represented as open water in the DNR Hydrography layer are assumed to have been open water or wetland at pre-settlement times.

The surface area extent of current water storage was approximated using the National Wetland Inventory (NWI) 1980 - 1986 and the updated NWI (2009-2014) when available. These layers were combined so that the best available coverage was used for current wetlands and water bodies.

The data used to calculate this metric was created by the Altered Watercourse Project, completed 2012. State-wide photointerpretation was used to classify all streams in the state into four major classes: Natural, Altered, Impounded or No Definable Channel. 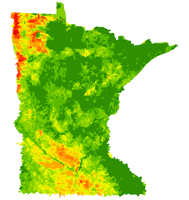 The highest scores (least wetland loss) are found the north central peatlands, the northeastern Arrowhead region and the southeast. In many cases, the northern systems have been ditched but still have water holding capacity and continue to score well. The high scores in the southeast may partially reflect a different historic landscape that held fewer wetlands. 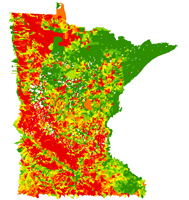 The altered watercourse metric shows low scores (greatest alteration) in a similar pattern with some exceptions. Ditching activity lows the scores in the north central region. Low scores in areas of urban development and expanding transportation networks show areas being impacted beyond the predominately agricultural areas.

High score are again prevalent in the north central and north east, reflective of the generally less developed nature of the area. In the southeast, the bluffland watersheds show less watercourse alteration, reflecting the steep topography that makes stream channels less accessible for other land uses.

Land cover conversion to row-crop agriculture and urban development is correlated with decreased storage and more runoff through storm sewers, ditch drainage, and tiling. This reduced storage and increased runoff is associated with the delivery of sediment to streams and increased concentrations of nitrogen, phosphorus, endocrine disruptors and chemical contaminants from agricultural and urban systems.

The connectivity of land and water systems is affected by the loss of wetlands, riparian buffers and perennial cover. The pathways that moved energy, matter and organisms between these landscape features are disconnected, disrupted or shortened by constructed drainage features. This alteration can also increase storage in dams and reservoirs and create water flow between basins not historically connected.

Storage reduction and geomorphology may be related through changes in flow regimes. Decreased storage may lead to flashier streams, with higher peak flows that have higher erosivity and greater sediment transport capacity. Watercourses may become more incised with increased erosion driven by increased stream power.

Decreases in storage are directly related to losses in wetlands and obligate wetland species. This directly affects diversity, reproductive success, and population levels of fish, bird, and other taxa. Altering watercourses removes the meanders that create the riffle, pool habitat configuration essential for healthy aquatic communities.

Scientific support for the components of the index is strong, with a number of studies showing increasing degradation to water quality and adverse change in stream hydrographs as storage is reduced in watersheds of the region.

A number of studies have identified the decrease in water quality and adverse changes in peak water flows with the loss of storage and the increase in ditching and tiling. Verry (1986) showed that runoff from tiled farmland in northern Minnesota may produce 100 times more sediment than from untilled, vegetated lands, while Detenbeck et al. (2000 and 2005) showed that drainage increased both peak flows and stream flashiness, with higher storm maximum flows and lower dry-period flows. Subsurface drainage, largely through tiling and ditching, affects the redistribution of water (Herzon and Helenius 2008), so that field sediment and soil-bound nutrient levels decrease, but water soluble nitrogen levels increase. Tiling may cause changes in geomorphology that affect downstream sediment loads. For example, Knox (1977) found a decrease in channel width caused by water table reductions following wetland drainage and channelization. Higher peak flows and increase channelization tends to increase stream bank erosion.

These changes may be somewhat mitigated by vegetation and farm management, but it appears to have a limited extent. Schilling et al. (2008) found that drainage affects flow even under re-established perennial vegetation, and produces higher water yields and peak flows relative to similar unchanneled or untilled areas. Alternative farming practices such as diverse crops, a larger proportion of perennial vegetation, and organic farming practices had some impact, but the tested alternative cropping practices with drainage still exhibited high peak flows in response to rainfall.

Research has also shown that adding storage, via wetlands and impoundments, and removing tiles, improves water quality. For example, many studies have documented a decrease in nitrogen and phosphorus exports after adding wetlands (Chescheir et al., 1991, Woltemade 2000, Novak et al., 2004).

The confidence in the results is high. The basic relationship behind this index, between flashier streams and higher peak flows and increased reduction in storage, is well supported by a large number of scientific studies globally, nationally, in the Midwest, and in Minnesota. The evidence linking these two is incontrovertible, with theoretical and observational studies showing increase nutrient and sediment concentrations with reduced storage, and increases in flooding frequency and intensity. Studies by Detenbeck et al. (2005), show increased two-year peak flow and increasing flashiness with decreasing storage. Oquist et al. (2007), showed longer recession times of water levels for farming practices with increased storage, and Schilling et al. (2008), showed an increase in stream flow regardless of vegetation with an increase in tile drainage. A decrease in storage increases channel depth and decreases channel width (Knox, 1977), and increases susceptibility to erosion (Birr and Mulla, 2001). Verry (1986), showed that surface runoff from tiled land may produce 100 times more sediment than from vegetation-covered land, and Herzon and Helenius (2008) noted that reduced storage and increased drainage through tiling and ditches leads to the loss of filtration through the soil, with increases in soluble nitrogen, phosphorus, and herbicides in surface waters.

Index scoring is on a linear scale. Work is sufficient to establish an increase in peak flows as remaining storage declines from 100% of historic condition to 0% remaining storage. However, few studies have focused on response curve shape or thresholds, so there is little evidence to identify that these might exist.

Data used in this index are of adequate quality. National wetlands inventory data are available statewide, compiled on a high-resolution base. These data could be improved as there are frequent errors of omission, particularly for smaller wetlands, resulting in a tendency for underestimates for our calculated ratios. Stream data are well developed for Minnesota, and the altered watercourse dataset (published 2013) used rigorous protocols and quality control to identified altered stream reaches.

The largest uncertainties are the estimated values for pre-settlement wetlands. Estimates based on hydric soils and historic water bodies is a reasonable approach given lack of accurately mapped historic wetland extent.

Relationships between storage loss and subsequent impacts could be better quantified to identify when specific impairments are likely to be exceeded, and whether thresholds can be identified. Quantification of these relationships will likely be best approached for a small subset of important stream attributes, e.g., flow peak, nitrate or phosphorus concentrations, or some other widely measured and important characteristic.

Using LiDAR and other tools to calculate storage volume (rather than surface area) for calculating water storage features would provide a more accurate representation of change in the landscape's water holding capacity.

The National Wetland Inventory and the SSURGO soils databases are both being complete statewide. When available, these data products will be used to re-calculate the Loss of Wetland metric.

The index would benefit from inclusion of storage loss via drainage tile systems, and the inclusion of water stored in soils, vegetation and stream channels.

The index could be expanded to include an integrated water balance analysis. Runoff is precipitation minus evaporation/transpiration +/- storage. The expanded network of stream gages for all major watersheds could be used for calculating runoff timing and amount. The length of the record for new stream gages is too short for many watersheds, so longer time periods would be required for a statewide approach.