How much groundwater and surface water is estimated to be withdrawn in each watershed for off-site use?

Groundwater and surface water naturally have seasonal fluctuations and annual variability. This variability is driven by climate and human activities, chiefly water withdrawals and land use change. Water withdrawals can reduce water storage in aquifers which in turn may reduce discharge to surface waters, or increase recharge from other sources to fill the depleted aquifer. The withdrawal of surface water can also directly reduce the flow in streams and the water levels in lakes and wetlands.

Ground water is connected to surface waterbodies, such as streams, lakes and wetlands, and the strength and speed of that connection depends on many factors. Ground water often sustains the flow in streams and the water in lakes and wetlands through discharge, especially during dry weather. The contribution of ground water to all stream flow in the U.S. has been estimated to be as large as 40% (Alley et al., 1999). This connection also allows ground water to be recharged from surface waters, as flows from wetlands, lakes, and rivers may be into adjacent underground reserves. Thus, ground water and surface water are more effectively managed as a single unit (Winter et al., 1998). Ground water and surface water have seasonal fluctuation and annual variability, which are driven by climate and respond to human activities (mainly water withdrawals and land use change). 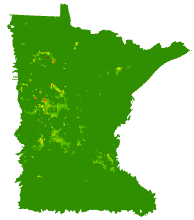 The index is based on the sum of permitted withdrawal from surface water and groundwater. The State Water Use Database (SWUD) was accessed, and the location and amount (gallons/year) recorded for each permit. Total potential consumption was calculated by summing permitted use on an annual basis. Once-through water for power generation was not included in the index.

Scores are based on a mean of the last 5 years for which data exists. Scores are inversely related to the “water use vulnerability index”, i.e. the greater the amount of water used as percent of runoff, the lower the score.

The five year trend in reported use as a percentage of runoff is projected out another five years into the future. While this prediction is inexact, it can be used to identify emerging problem areas in terms of water use.

Water withdrawal vulnerability is highest in the Twin Cities Metropolitan Area, particularly near White Bear Lake and Vermillion. A corridor also runs to the west and north west, notably in the areas near Park Rapids, Brooten and Benson, Minnesota. Pockets of higher vulnerability also occur from mining facilities in north east Minnesota, as well as upstream of Red Lake Falls and near Bemidji. High scores, indicating comparably low water use vulnerability, were found for the rest of the state of Minnesota.

Domestic well locations (shown in the map above) use an estimated of 260 gal/day for a family of four. This quantity was not found to be a significant source of withdrawal when compared to the permitted water withdrawal amounts. Further analysis including domestic use is planned.

Water withdrawals are concentrated with population, or in the case of the St. Louis River, an additional large permitted withdrawal. Ground and surface water permits are concentrated in the Twin Cities Metropolitan Area, and along the Mississippi River corridor to the north and west. Although domestic wells are not included in calculated water use, they are present in all but the extreme northern portions of the state. Their density is highest in the Metropolitan Area, thus the permitted withdrawal and domestic withdrawal combine to create the largest demand. There are isolated large withdrawals in other parts of the state associated with mining, agriculture and agricultural processing, large power plants and industrial installations.

The vulnerability of high water use coupled with limited water availability shows areas in Minnesota that have the potential for water shortages. There are many factors that can lead to water availability shortfalls in any given year, such as precipitation patterns; but the vulnerable catchments are at greater risk given current water use patterns.

Ground water withdrawal can cause the water quality to degrade by reducing cleaner subsurface flow relative to degraded surface flow. Overland flow, which may entrain chemical pollutants and sediment, is not diluted by naturally filtered groundwater.

Low water surface of streams and lakes can adversely affect the bank vegetation, causing habitat loss and a reduction in wildlife corridors.

Ground water withdrawal can result in land subsidence via three mechanisms: compaction of aquifer systems with clay and silt layers, dissolution and collapse of rocks that are relatively soluble in water, and dewatering of organic soils.

There is a well-developed literature documenting the importance of groundwater for surface water quantity, quality, distribution, and flow, and how human withdrawals may affect these factors. However, this index only approximates the risk of excess withdrawals, due to lack of data on actual withdrawal rates, withdrawal points vs. precipitation and consumption locations, and measured variation in aquifer levels and recharge rates across Minnesota.

Groundwater plays an important role in the hydrological and nutrient budgets of lakes, especially when evaporation exceeds precipitation and there is no stream flow into or out of the lake. Peaks in water withdrawal occur from late March to early April and in late June to early July when groundwater is withdrawn for agricultural use from spring to summer. Groundwater levels often become lower than the lake level, resulting in lake water predominantly flowing out to the surrounding aquifer from spring to fall, but groundwater flows into the lake the remainder of the year. These flow variations may alter the nutrients and dissolved oxygen in the lake.

Water withdrawal for urban uses can also influence subsurface flow regimes. Increases in withdrawal and decreases in recharge of groundwater due to urbanization influence subsurface flow regimes, especially during low-flow conditions when the baseflow from groundwater could be the only source to a stream. Because of lag times in groundwater responses, withdrawal of ground water in the middle of an irrigation season can affect stream base-flow into late summer and early fall.

Ground water withdrawal may reduce summer flows in streams, with many adverse effects. A stream can rapidly warm in summer and cool in winter, which means unstable environments for the metabolism of aquatic life. Low flow combined with high temperature reduces dissolved oxygen in streams. Low flow also contains less particulate debris and dissolved constituents (WOW, 2004). The hyporheic zone, the interface between stream water and ground water in the bed and banks of streams, is a focus of microbial activities and chemical transformations (Alley et al., 1999). The withdrawal of ground water or surface water can alter the flow direction and magnitude in the hyporheic zone, which affects those biological processes and may alter water quality. However, the effects of ground water withdrawal on hyporheic biota have not been well investigated (Alley et al., 1999).

Confidence in this metric is moderate. Although the best available data were used, the depth of analysis possible is still limited. Although water use permit data are available statewide, the index uses the 'maximum permitted use', not a measure of actual water used. In addition, the comparison of water use to total water available relies on estimates of runoff. Additional groundwater level data and stream flow data could improve this index and more accurately reflect vulnerability associated with water use and available water quantity.

This index should further refine measurements of water withdrawals relative to water availability, specifically identifying the geography of supplies and uses, and accurate measurements of both available and consumed water through space and time.

The current index only incorporates a measure of permitted consumption, and the measures of consumption are flawed. Water origin and available volumes should be mapped, such as watersheds above surface withdrawal sites, and aquifer volumes, recharge areas, and flow rates, because current aquifer recharge rates and natural and human transfers are poorly estimated. The boundaries of subsurface flow areas are not well known. Because there is insufficient data in the scientific literature to numerically rank this index and there are no known threshold values, the resulting values were ranked in equal intervals from the smallest to largest value.

These shortcomings may be removed, at substantial costs, by new and better data collection. Sub-surface flow directions may be collected and organized for all Minnesota regions. All wells and water access points could be mapped, and methods applied to measure and/or estimate actual, rather than permitted consumption.