How intense is the use of agricultural chemicals? How much impervious surface exists near streams?

Why is this important for water quality?

Waters are vulnerable to runoff of chemical contaminants from adjacent lands. These chemicals are often applied at low concentrations, but become pollutants and cause damage when carried to streams, rivers, wetlands, and lakes via rainfall, irrigation runoff or subsurface flow. Deposition of pollutants from the atmosphere and urban runoff containing contaminants are other non-point sources that may end up in surface water after being routed by impervious surfaces. 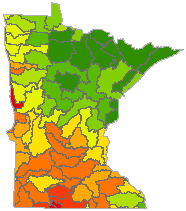 Different approaches have been taken for calculating this index at the Major Watershed (HUC8) scale and the sub-watershed DNR Catchment scale. The approaches are described separately:

A second metric is based on impervious surface in riparian areas or floodplains, defined as those within a 200 meter buffer of the 1:24,000 scale Minnesota Department of Natural Resources streams map or within the 100 or 500 year floodplain as defined by the Federal Emergency Management Agency (FEMA) Floodplain maps. Impervious surface data are available from a statewide analysis by the University of Minnesota. Impervious data are provided as a proportional coverage, so these coverages are summed for an area-weighted mean of the near-water impervious percent for the watershed. The value for each watershed is then linearly scaled from 100 (zero impervious surface) to 0 (if 4% of the defined riparian zone was impervious surface).

The final index is the average of the first and second metric.

This metric quantifies the risk of phosphorus mobilization from upland non-point sources. In Minnesota, the majority of non-point source phosphorus that reaches surface waters in years of average rainfall comes from overland flow (Barr Engineering, 2004). This metric combines a land-use based phosphorus export value with soil erodibility and slope to assess the relative risk of mobilizing phosphorus from the landscape.

Risk values were calculated as a three meter grid that covers the entire state. For each cell, an individual score represents the risk of phosphorus mobilization from that location.

The minimum possible cell value is 0 (for wetlands which have a "0" phosphorus export coefficient). The maximum possible cell value is 4.4 (row crop phosphorus export coefficient 2.2) * (1 + max slope factor (.5) + max soil erodibility factor (.5) were also at their maximum threshold value). With these methods land use is the primary consideration to the final score, and slope and erodibility are used as modifying coefficients representing an increased risk due to physical landscape conditions. Slope values were rescaled from 0 (equal to 0% slope) to 0.5 (equal to 15% slope). Soil erodibility values ranged from 0 to .49 and were not rescaled.

Nutrient and other chemical application rates are highest in the agricultural southwest and western edge of Minnesota, resulting in scores less than 30 in these regions. Application rates are near zero for much of the east-central through northeastern Minnesota, resulting in high averages scores (most above 90, many near or at 100). Deposition-related scores, related to impervious surfaces, are highest in the watersheds adjacent to the Metropolitan areas of the Twin Cities, Rochester, and St. Cloud with scores generally less than 10. Low scores were also found in the less developed southeast driftless area (less than 20) where development is concentrated in flat river bottom and near-stream areas, and in some agricultural watersheds, with a high rural-road density to serve farmsteads. Much of the central portion of the state has intermediate scores (generally 20-50), whereas the northern portion of the state, particularly the northeast, exhibit deposition-related scores greater than 70.

Composite index scores combine these two trends, with highest average scores in the north and northeastern portion and extreme southeastern parts of Minnesota, transitioning through intermediate scores in the central portions of the state, to lowest scores in the south and a few western watersheds.

Most water quality impairments do not directly alter hydrology. But altered hydrology may either increase or decrease the movement of pollutants into aquatic systems. Removal of vegetation in riparian or upland areas can increase runoff, which can transport pollutants to streams or lakes.

Water quality impairments play an important, but indirect role in the connectivity of streams. However, elevated levels of nutrients may cause excessive plant growth. When the plants die and decompose oxygen levels in the water may be reduced, which may act as a short-term barrier to fish movements.

There is an indirect relationship between geomorphology and water quality impairments. For example, potential pollutants, such as nitrogen or phosphorus are more readily delivered to streams in areas with higher slopes or fine soils.

Many water quality impairments affect aquatic organisms. For example, high sediment loads may be lethal to aquatic organisms, but more often sediment results in chronic effects, such as reduced growth rates in fish.

Agricultural land uses have been shown to increase non-point source pollutants. Sediment inputs, nitrogen concentration, and phosphorus concentration increase with agricultural land use; conversely they decrease in relation to forest land cover (Allan et al., 1997). N and P concentrations are lower in less-disturbed headwater streams and increase downstream with agricultural and urban land uses, causing greater biological oxygen demand (BOD)(Welch et a., 1998). Much of this high BOD is due to excess fertilizer, with up to 40% of surface-applied N and P fertilizers reaching waters depending on rates and application conditions (Johnes et a., 1996, Gowda et al., 2008, Nangia et al., 2008).

These non-point source inputs have been shown to harm stream biota and functions over a range of conditions and in a number of ways. Measures of carnivorous, intolerant, omnivorous, and salmonid fish and IBI scores showed clear decreasing trends as concentrations of phosphorus and nitrogen increased (Wang et al. 2007). Frequency of algal blooms increased in lakes when total phosphorus concentrations increased to above 50 to 75 µg/L as a result of non-point inputs, as well as a reduction in the density of some important fish species, rooted vegetation, and water clarity (Heiskary and Wilson, 2008). Intolerant Ephemeroptera, Plecoptera, and Tricoptera (EPT) and percent Tanytarsini midges were associated with low chemical oxygen demand (COD), biological oxygen demand (BOD), and siltation gradients in a study by Norton et al. (2000). They also found that darters and lithophilic spawners (fish which require clean gravel) were associated with low siltation, whereas omnivorous fish were associated with sites with high siltation, BOD, COD and nutrients. Generally, the diversity of fish species decreases with added nutrients from agricultural fields and the absence of fish is a good indicator of high concentrations of nitrogen and phosphorus in the water. For example, a study in Ontario, Canada found that the main threat to fishes and mussels was heavy loadings of sediment, nutrients, and possibly pesticides to the river via tile drainage and overland runoff from agricultural lands (Staton et al. 2003).

We are confident in the results for this index. The basic relationships between increased landscape inputs and decreased forest and natural vegetation in riparian areas or floodplains have been established in a broad range of studies, over several continents, in the U.S., and in Minnesota and Wisconsin. The mechanisms are well understood, from the application or atmospheric deposition of the distributed pollutants, the flowpaths by which they travel to water bodies, factors that disrupt/change these flow paths, chemical and biological transformations as these inputs are transported, and factors affecting concentrations and impacts once these pollutants reach water bodies. For example, Goetz et al. (2003) found strong relationships between the level of impairment and impervious surface, particularly in near-stream environments. Other studies have confirmed these or similar results for a range of pollutants, including chlorides and elevated pH (Zampella et al., 2007), fecal coliform and TSS (Schoonover et al., 2005), nitrogen and phosphorus (Johnes et al., 1996, Welch et al., 1998, Townsend et al., 2004, Moore 2007), or a range of pollutants (Staton et al, 2003, Schoonover et al., 2005, Heiskary and Wilson 2008), with thresholds of 4 to 6% for urban areas or greater than 35% for agricultural land use in riparian areas indicating the initiation of significant impacts. Detrimental effects include excess algal growth and reduced plant diversity (Moore 2007), low biotic integrity and diversity of fish and invertebrate communities (Smith et al., 2007, Wang et al., 2007, 2008), and increased biological oxygen demand and mortality of aquatic organisms (Albert and Minc 2004, Hanson et al., 2005).

The index is based on mapped impervious surface data at a 30-meter resolution from Landsat satellite images. Permeabilities may be poorly estimated for isolated features narrower than this resolution, either by omission (e.g., narrow roads) or commission (e.g. very bright natural features with high permeabilities such as sandbanks or beaches). Although these data represent the best, uniform, statewide coverage available they could be improved. For example, all vegetated surfaces are considered infinitely permeable, and many studies indicate substantial variation dependent on soils, land use, and terrain (e.g., lower permeabilities with clay soils, row-crop agricultural land due to plowing or compaction, or higher permeabilities under older woody vegetation). Future indices could improve these estimates of permeabilities.

In addition, the index relies on county-level estimates of chemical application, apportioned to watersheds in proportion to agricultural area. More precise records of application rate and location would improve the index, perhaps through sampling, but more likely through an integration of crop type and typical application rates.

Finally, the specific threshold for scoring could be improved for local conditions. The threshold uses a 200-meter buffer and a 4% impervious surface threshold for an initiation of impact. These numbers, while well-supported in the literature, could be refined as more studies of specific impacts become available for conditions statewide.