Are localized pollutions sources known to be present within a catchment or watershed?

Why is this important for water quality?

Known locations with the potential to produce and disperse contaminants are a threat to surface water and groundwater quality. A wide variety of chemical, nutrient and temperature impairments occur from these sources. Pollutants may move directly into streams as contaminated runoff, infiltrate into groundwater, or discharge from wastewater or industrial processing.

A catchment with a low score can be considered a ‘flag’ that requires further review to discover possible impacts from a contaminant source. It is necessary to consider the range of pathways that might disperse materials of concern. Vectors such as air flow and groundwater may disperse materials to locations that are not related to surface water flow patterns and topography.

Pollution sources also create risks for other aspects of watershed health such as air quality, soil contamination and harm to sensitive plant and animal species. The presence of a localized source does not indicate that harm has occurred, but that the potential risk should be considered and investigated. A review of localized pollution sources should include identifying: 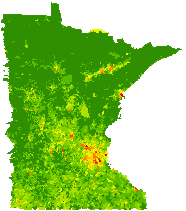 A lower score indicates greater presence of pollution concerns at the catchment scale. There are a range of pathways that might disperse materials of concern to locations that are not related to surface water flow patterns and topography. The impact from a pollution source may occur outside the catchment boundary. 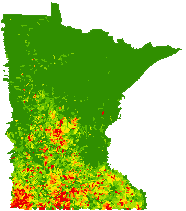 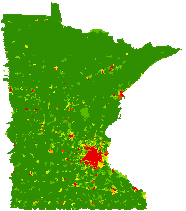 Potential contaminants are identified from a database managed by the Minnesota Pollution Control Agency (October, 2014 data). Sites that are included vary in the severity of the risk but are all deemed to be a threat to water quality. The contaminant types included in the index are: 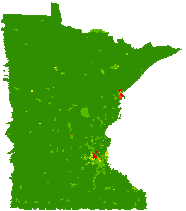 This metric is currently being revised. The index currently uses an incomplete representation of contaminated sites within the Superfund Program and should be used with caution. There are additional sites that represent risk to natural resources and are not accounted for by this index approach. The index scoring approach is being reviewed and an updated approach is pending. Users should refer to the MPCA Groundwater Contamination Atlas, for site-specific information about superfund sites that impact groundwater resources.

This metric represents the density of listed sites on the Permanent List of Priorities (PLP) and the National Priority List (NPL). This combination of federal and state listed superfund sites includes both active and inactive locations. Total number of sites is divided by catchment land area. Scores range from 0 to 90; with the 95th percentile density or greater = 0 and a maximum score of 90 indicating some level of risk when one superfund site is present. 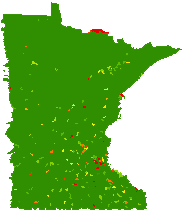 This metric measures phosphorus, nitrogen and carbonaceous biochemical oxygen demand (CBOD) discharge loads for WWTPs based on NPDES permit reports. The quantity of the three effluents is summed for each catchment and the relative quantity of effluent discharged within the catchment boundary is calculated. Where WWTPs are present, but no quantity was measured for that particular effluent, the catchment receives no score. The score for each effluent type is based on 0 = the 95th percentile of the load totals; remaining values are scaled from 0-100. 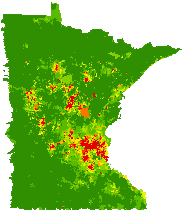 The domestic wells listed in the County Well Index (CWI) are used to approximate septic system location. Given these data assumptions and lack of historic records, this metric provides a conservative estimate of actual septic system density. The metric score is based on well density per km of land area in a catchment. Scores range from 0 to 100, with a the 95th percentile density (15.587 wells/km2 ) or greater = 0; no wells present = 100. 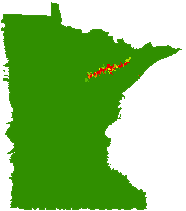 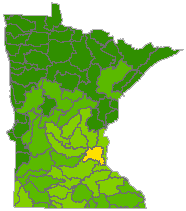 There is significant scientific literature to support a qualitative relationship between contaminant sources and water quality within a watershed. However, there is little scientific literature to define quantitative relationships or thresholds between the density of sources and impacts to watershed water quality. To address this uncertainty, the density of each localized source type is scaled from 0 (less desirable condition) to 100 (no point source present or most desirable condition). The zero value is set at the 95th percentile to avoid high density outliers from skewing the remaining range of results.

A literature-based threshold of .75 Animal Units per acre was used as the zero value for the feedlot metric. The ability to recycle manure on agricultural lands reduces the risk of contamination to surface waters. Research suggests that when cow manure is spread at rates exceeding .75 AU, excess phosphorous is being applied and there is a heightened risk for contaminating surface waters (Saam, Mark Powell, Jackson-Smith, Bland, & Posner, 2005). This value is considered a conservative threshold for the feedlot metric as the density is scaled to total catchment land area, not only cropland..

Note: For this index, the term 'localized source' refers to a known contaminant risk location. Some of these sources do not discharge to surface water and do not meet the statutory section 502(14) 'point source' definition of the Clean Water Act.

The combined Localized Pollution Source Index at the catchment scale shows the distribution and density of a wide variety of pollution sources. The highest density of localized sources occurs in the Twin Cities Metropolitan area, while the lowest density of localized pollutions sources is found across northern Minnesota outside of the mining areas. Many small cities scattered across the state also show some contaminant sources are present.

In addition, there are landscape conditions that increase the risk that contaminants will enter surface and groundwater, such as areas with karst features and steep topography, and areas with sandy course-grained soils. Risk to groundwater from known contaminant sites can be examined with the MPCA Groundwater Contamination Atlas.

Each localized contaminant type has the potential to impact the other 4 watershed health components. Some examples of impacts include:

Stormwater and wastewater permits for discharging water into streams and other surface water can change flow patterns and impact the timing and duration of high and low flows. Open pit mining activity can alter the direction of surface water flow, create large water storage features and remove permanent vegetation.

Water quality degradation due to chemical or pharmaceutical contaminants can result in populations of aquatic organisms that are unable to reproduce. These contaminants effectively create chemical “barriers” or locations within which some organisms cannot survive and disconnects the remaining aquatic populations.

Pollutants interact in different ways based on the pH, temperature, sediment load, available sunlight and other characteristics. The soil type and slope of the landscape have a large influence on the sediment load in streams and the way in which contaminated sediment moves and deposits within surface waters. The presence of karst geologic features such as sinkholes, springs and seeps increases the transport speed of contaminants to surface and groundwater. Thus, the geomorphic setting influences the impact of different pollutants on the health of the system.

Pollution can impact biological communities by directly affecting the health of plants and animals. Chemicals and hormone disruptors can reduce fertility and feminize male fish. Toxins in the air, water and soil can bioaccumulate through the food chain and have broad unforeseen consequences. Heavy metals, e.g., cadmium or nickel, released in industrial or mining discharges can result in mortality of aquatic organisms at very low concentrations.

The influence of point source pollutants on water quality were well known when the Clean Water Act was authorized (Karr 1981). Although the number of point sources has been reduced, a number of contaminants are still discharged and pose a threat to surface water and groundwater quality. Aquatic life (class 2) standards for water quality are often more stringent than drinking water standards (class 1) for many pollutants, so class 2 standards help protect drinking water as well. A wide variety of chemical, nutrient and temperature impairments occur from point sources including wastewater treatment plants, feedlots, landfills, and mines. Moreover, many older sewage treatment plants may now serve much larger populations than their design capacity with consequent reduction in treatment efficiency, which are a major contributor of phosphorus to streams (Johnes et al. 1996).

Elevated levels of ammonia, such as from wastewater can deplete the dissolved oxygen in the water and cause fish kills. Un-ionized ammonia (NH3) is toxic to aquatic biota at elevated levels where sensitive species and early life stages of fish are affected first (Moore 2007). The chronic standard for coldwater streams in Minnesota (Class 2 A) is 0.016 mg/L unionized ammonia and 0.04 mg/L for warmwater streams (Class 2Bd, B, C, D). In rural streams, ammonia nitrogen and nitrate nitrogen comes from leaky septic tanks and effluent from wastewater treatment plants (Gary et al. 1983).

Chloride enters waters from industrial and wastewater treatment plant effluents (Moore 2007). Chloride may interfere with the osmoregulatory capacity of organisms and is considered a pollutant. The Class 2 chronic standard for chloride is 230 mg/L.

Heavy metals, such as mercury, aluminum, copper, zinc, lead, nickel, selenium, chromium or cadmium, may be found in waterways and at elevated concentrations they can bioaccumulate in fish. Copper, lead and zinc are the most common metals found in the water and mortality of aquatic organisms may occur at very low concentrations. Sources for these metals include industrial wastewater, discharge from old landfills, or mining discharges, while aluminum is associated with industrial discharges (Welch et al. 1998). Metal concentrations increase in storm water flow in urbanized areas from corrosion of car parts and pipes.

Feedlots present a risk to water quality because of potential contamination from excess nutrients (primarily nitrogen and phosphorus), microbial pathogens, endocrine disruptors, and pharmaceuticals present in the animal waste (Burkholder et al. 2007). A threshold of .75 animal unit per acre of land was used as the "0" threshold value for scoring the feedlot metric at the catchment scale. This threshold is a conservative interpretation of a study estimating manure recycling ability of Wisconsin dairy farms. (Saam et al. 2005)

Thermal pollution from heated water discharge without regard to other pollutants can reduce growth in trout and other coldwater species. Fleming and Quilty (2007) found an increase from 15.2 to 15.9°C in daily mean stream temperature doubled the risk to aquatic biota and this risk grew exponentially with increasing stream temperatures.

There is a well-documented relationship between potential pollution sources and impacts to water quality from Minnesota and multiple locations around the world. The contaminant sources that are found in the effluent from localized sources can be measured directly in receiving waters and many studies have quantified these inputs.

The health score for the presence of localized pollution sources is based on a count of sites by type to create a density per watershed land area. There is no attempt to weigh the relative risk associated with different types of pollutants or different size sites.

The score from each type of potential pollution source was ranked from 0 to 100 prior to combining into an overall score. This approach allowed the different input types to have equal weight in the final score despite greatly different range in site numbers. In reality, the risk from each localized source varies greatly. Much more information about specific site characteristics, as well as location relative to surface and ground water, would be needed to quantify the variability of risk.

This index contains a very wide variety of potential contaminant sites and weights them equally. Points could be ranked based on site type, location, remediation actions, proximity to water, volume of discharge, and type of contaminant. Additional contaminant sources that are currently not scored could be included.

This index quantifies the density of a variety of potential pollution sources for each catchment (subwatershed). This information could be improved further by quantifying all potential localized sources that are in catchments upstream of any given site in the watershed.