The relative dimension used to measure and study any phenomenon, such as temporal, spatial, quantitative and analytic.

Selecting a boundary or watershed scale is one way to begin an exploration of watershed health. But that is just the first step; it is essential to change spatial scale to evaluate data layers and health indices. Different patterns of health emerge when you change the observational scale. Everything might look great in your backyard, but a birds-eye view of the city tells a different story. 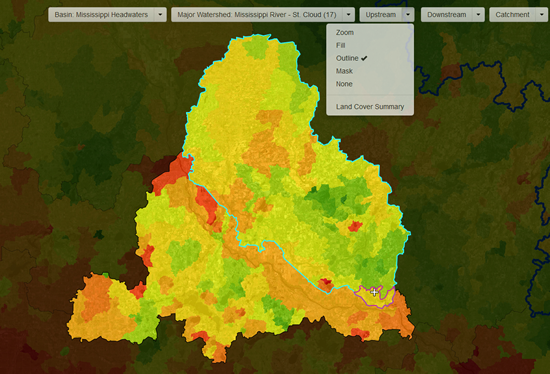 A true watershed contains all the land and water features that drain excess surface water to a specific location on the landscape. Sometimes the word 'watershed' is used for administrative boundaries that subdivide true watersheds for practical land management purposes. For example, nearly 50% of the 81 Major Watersheds in Minnesota are administrative subdivisions of larger true watersheds. 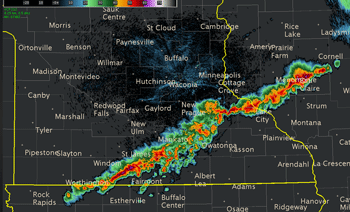 The link between action and response is rarely direct, and often involve multiple factors responding at different rates. Looking across the time horizon is important when assessing the status of a system. Like instinctively checking the weather map before deciding whether to take the motorcycle or the car to Winona, remember to look over the time horizon to check for ecological changes and challenges predicted to come. Decisions made today should use the predicted future trajectory of change to address tomorrow's most probable conditions.

When a system reaches a scale 'threshold', something about the response changes; the intensity, magnitude, even direction may shift. There are limits to the amount of change a system can absorb and still return to its former condition or functional state. When a system changes beyond this point, it has crossed a threshold and will re-organize into a new (often undesirable) state. In social systems, the point at which a system re-organizes into a new form is sometimes referred to as a 'tipping point'.

The energy or actions necessary to return an altered system to a previous state by crossing back over a threshold can be slight or it can be prohibitive. Because systems are self-organizing and self-regulating, the response to being disturbed or altered is not always predictable. A lake is an example of a system that will predictably turn over seasonally. When the temperature at the surface reaches a threshold value, water density shifts and sinks, and the colder water below is displaced and forced to the surface. However, most thresholds are not so well understood or predictable; as they involve feedback loops and delayed responses. Additionally, as the resilience of the system shifts, the distance to the system threshold may also shift.