The Mean Watershed Scores decline from north to south, and east to west; with the lowest mean scores in the Red River and Minnesota River basins. These overall scores closely follow land uses that remove permanent vegetation, alter streams or increase impervious surface. Although combining all the scores will mask extreme values from any individual index, the overall Mean Watershed Score is a useful indicator to broadly compare watershed health across the state. 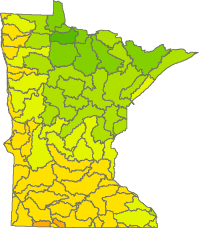 The Mean Watershed Score is a 'mean of means' created by combining the 5 Component Mean Scores.

Each Mean Component health score has equal influence on the Combined Mean score.

Although the Mean Watershed Score masks extreme values from individual indices, it can be useful for broad comparisons of watershed health. Adding other boundaries such as Major River Basins and Ecological Classification Boundaries reveals important patterns of health for related watersheds, such as those within the same major river basin, or within the same Ecological Classification.

Relationships between landscape conditions, river basin position, and watershed health begin to emerge. For example, an upstream to downstream decrease in health scores is evident in the Upper Mississippi River Basin. Further exploration would be needed to determine which health stressors accumulate as the river moves downstream, and which health challenges are expanding outward from the metropolitan areas in the mouth of the basin. 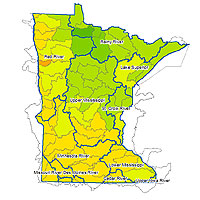 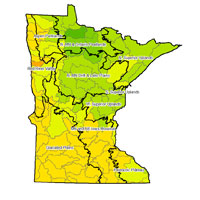 As expected, none of the watersheds in Minnesota are in perfect health. Due to comprehensive landscape changes and a growing human population, all of the 5 components of watershed health have been degraded to some degree, although the drivers of degradation differ by region.

Location matters. The healthier watersheds in Minnesota tend to be those furthest upstream. This trend can be seen in the Red, Rainy, Upper Mississippi and St. Croix Basins. Health problems travel through the system, and their cumulative effect reduces the health of the system downstream. Headwater watersheds that "export" water and are not recipients of sediment and contaminants, tend to have higher health scores then their downstream neighbors.