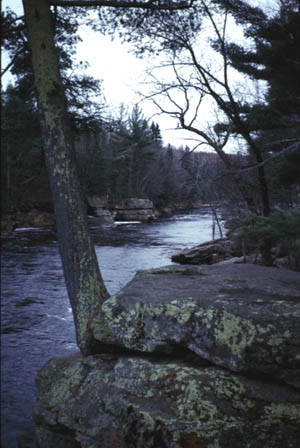 The Kettle River is a State-designated Wild and Scenic River that has a diversity of habitat and gradient along its 80 mile length. The river originates in a series of small, slow flowing bog streams near Cromwell in Carlton County. From river mile 62 (near the Carlton County 131 crossing) downstream, the river is large enough to have suitable gamefish habitat. The width of the river ranges from 75 feet at the beginning of the navigable portion to 250 feet in the lower reaches.

The Kettle River contains some rocky, high gradient rapids, most notably the series of whitewater rapids as the river flows through Banning State Park known as Hells Gate. This area most be avoided or portaged around as it is extremely dangerous. Rapids also occur south of Robinson Park near Sandstone at the old dam site, at river mile 18.5 (between Sandstone and Highway 48, known as the Friesland Rapids), and near the mouth of the river in St. Croix State Park. The Friesland Rapids and the area in St. Croix State Park can usually be canoed during most water conditions, although during low water you may need to pull the canoe through some spots. Most of the rest of the river can be paddled easily by a novice canoeist.

Since much of the water comes from runoff, the Kettle River is subject to low flows in late summer, especially in the upper reaches. It is recommended that boaters check gauge readings (see link below) before making a trip.

Thirty four species of fish were sampled during a 2002 river survey on the Kettle River.

The Kettle River is home to several species of native minnows and darters, as well as two native lamprey species, the chestnut lamprey and the brook lamprey. The chestnut lamprey preys on primarily sucker species, attaching itself to the fish by its disc shaped mouth and rows of sharp teeth. However, unlike the non-native sea lamprey in the Great Lakes, chestnut lampreys do not have an adverse effect on fish populations.

Canoes are the recommended means of travel on much of the river, especially upstream from State Highway 23. Small motor boats can navigate the river from Highway 48 to the Maple Island access in St. Croix State Park, but beware of sand bars and submerged obstacles such as rocks and logs. Small boats can also launch at the Robinson Park access in Sandstone and travel downstream as fas as Big Spring Falls, upstream from the old dam site.