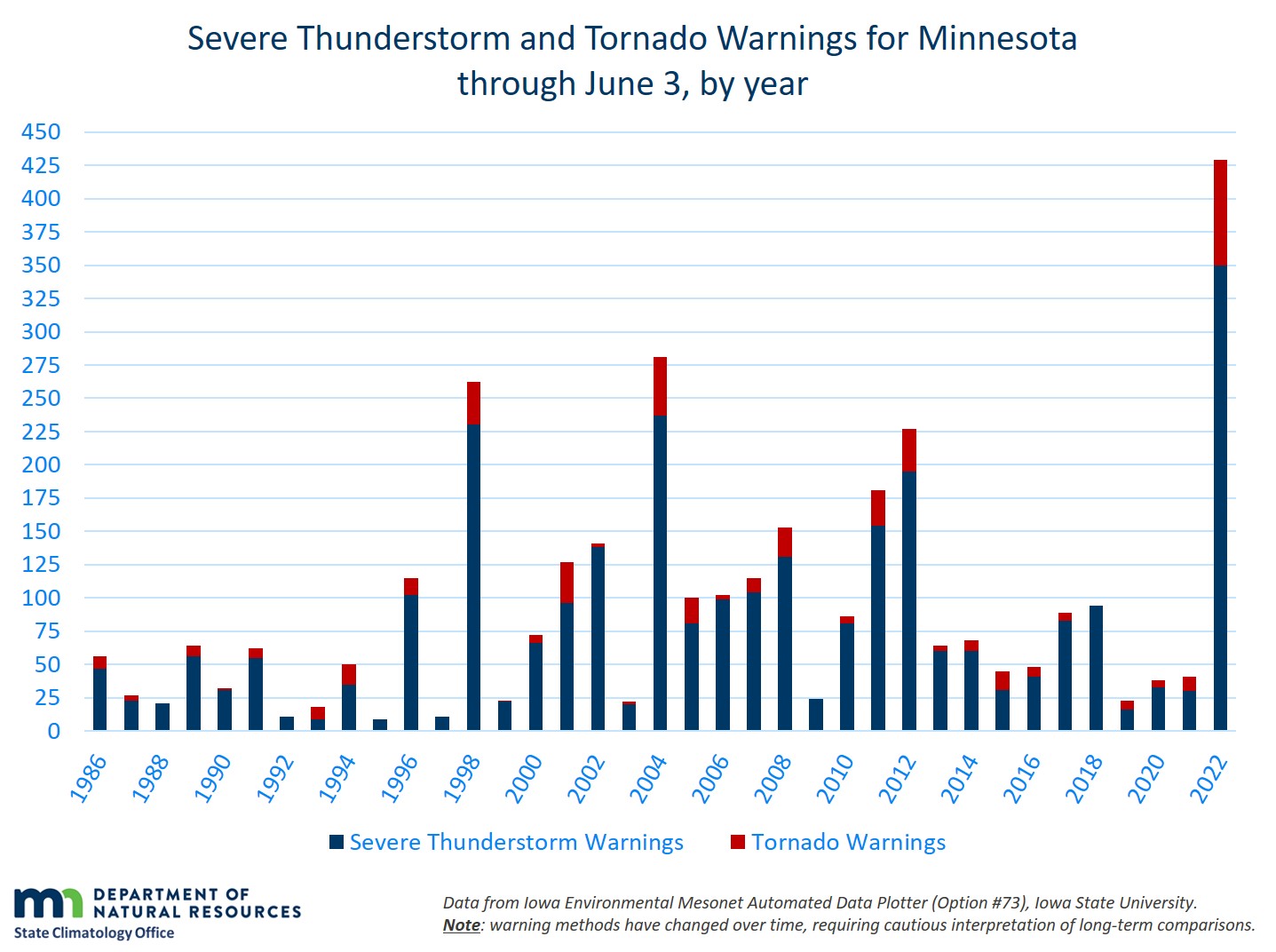 Minnesota occasionally goes through periods of high severe thunderstorm activity, and May of 2022 became one of the most active months the state has seen in years.  Six different calendar days had some combination of tornadoes, hail larger than golf balls, and hurricane-force winds (in excess of 74 mph). Many of these days had all three, and most featured "double-headers," with both early and late-day significant severe weather events. Although severe thunderstorms did not strike every single Minnesota town during May, some places were struck multiple times, and every part of the state except for the extreme northwest had damaging storms within 25 miles at some point.

The six National Weather Service forecast offices serving Minnesota (Grand Forks, Duluth, Twin Cities/Chanhassen, La Crosse, Sioux Falls, and Aberdeen) issued 373 severe weather warnings for some part of the state during May, which is more than any other month of any other year back to 1986.* The 299 Severe Thunderstorm Warnings beat second-place June 2005 by a margin of 15. The 74 Tornado Warnings issued tied June 2005 for second-most, behind the 102 issued during June of 2010.

Minnesota's 2022 severe weather season had already begun in April, so the number of Tornado and Severe Thunderstorm warnings issued to date (through June 3) was higher than through this time in any other year.

Here is a quick synopsis of the major severe weather days in Minnesota during May of 2022:

May 9: Intense morning thunderstorms produced a swath of hail the size of golf balls, tennis balls, and even baseballs, from Yellow Medicine County through the Sturgeon Lake area. Evening severe thunderstorms produced hail near the Twin Cities and into southern Minnesota, with isolated strong winds near Rochester and a tornado near Gilman.

May 11: morning and afternoon  thunderstorms produced hail to the size of tennis balls in Oronoco, and evening severe thunderstorms swept from southwest to northeast, causing extensive damage across southwestern, southern, and central Minnesota.

May 18: Storms produced hail and damaging winds, peaking in the forested areas northwest of Duluth.

May 19: Hail fell hard across Rochester, Minneapolis, and St. Paul, and was up to baseball-sized in Albert Lea.

May 30, Memorial Day: An impressive morning thunderstorm complex produced winds up to 84 mph in Renville County, but a much more significant afternoon and evening outbreak of storms produced long-track tornadoes and thunderstorm wind gusts up to 90 mph from southwest through northeast Minnesota.

*A note on interpretation of severe weather warning counts: the methods and technologies available for issuing severe weather warnings have changed substantially over the years, making long-term comparisons difficult. Storm detection capabilities improved dramatically during the middle 1990s, and more precise warning techniques were implemented in the late 2000s. These changes make it likely there are currently more individual warnings issued than in the past. Using other sources, like the database of severe weather events, May 2022 does appear to be unusual for its high number of days with significant severe weather, and should be thought of as among the stormiest months on record. Some years from the late 1970s into the mid-1980s were incredibly stormy, often with multiple statewide outbreaks. Several months during that period likely rivaled May 2022.