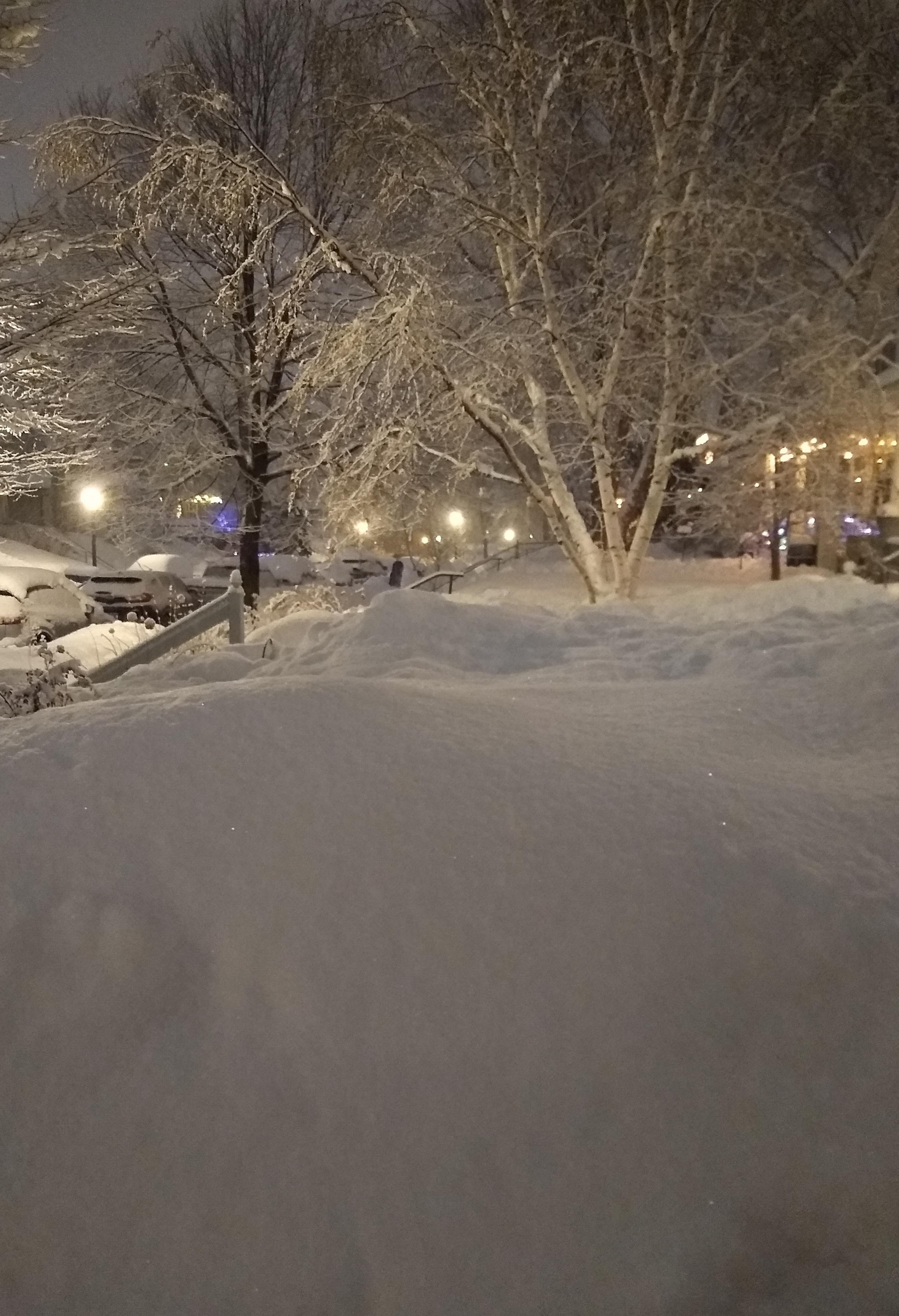 The new year greeted Minnesota with another large, messy winter storm, as a concoction of heavy snow, freezing rain, sleet, rain, and thunderstorms pounded parts of the state from Monday January 2nd through Thursday January 5th, 2023. The storm produced widespread accumulations of over one foot, and broke into the top-20 for storm-total snowfall in the Twin Cities.

This was a "warm" winter storm, only loosely connected to cold air, and totally lacking the intrusion of bitter air that often accompanies or follows Minnesota's strong winter storm systems. Instead, temperatures began in the 10s and 20s F, but warmed through Tuesday and Wednesday, with stations throughout southern and eastern Minnesota climbing above 32 degrees F for a time, even as winds blew from the north.

Like November's powerful fall storm, the mid-December slush storm, and even the pre-holiday snowstorm and ground blizzard, this one sprawled over multiple days, taking numerous "breaks" along the way. This 48 to 72-hour storm had three distinct phases, as low pressure moved from the Texas panhandle on Monday, into Iowa on Tuesday, before stalling in Wisconsin Tuesday night and weakening over the next 1-2 days.

During the first phase, as deep moisture surged into far southern Minnesota, a narrow band of snow formed over southwestern and far southern parts of the state during Monday, and lasting into the night in some areas. The snow mixed with and turned to sleet and freezing rain to the east of I-35, leaving a moderate glaze on many surfaces, along with very slick roads. Lighter snow and mixed precipitation occasionally spread northward into central Minnesota on Monday and Monday night, but this first phase was really concentrated in the southern three tiers of counties, where many areas received around a half-inch of precipitation. Snowfall up to 8 inches was reported in southwestern Minnesota near Pipestone and Edgerton, with 1-3 inches common eastward along I-90.

A final phase of snow had been expected to bring light to moderate snow to much of central and eastern Minnesota from Tuesday night into early Thursday. This snow was expected to accumulate about 1-3 inches Tuesday night, and again on Wednesday. Residents of the Twin Cities, however, particularly in the near-southern suburbs, awoke Wednesday to find that the snow they had cleared the previous night had been entirely replenished, and even doubled in some places. Indeed, several vigorous bands of snow dropped an additional 3-7 additional inches overnight across much of southern and central Minnesota, with areas near Bloomington, Burnsville, Lakeville, and Woodbury receiving 7-10 inches of overnight snow. This was a heavy, sticky snow that coated tree branches and had a rough and textured appearance, as opposed to the smooth, laminar look of snow blankets that form in colder conditions.

The snow continued falling through Wednesday, with the heavier snow focusing on the northern suburbs and much of central Minnesota. The snow had ended across all of Minnesota by Thursday morning. 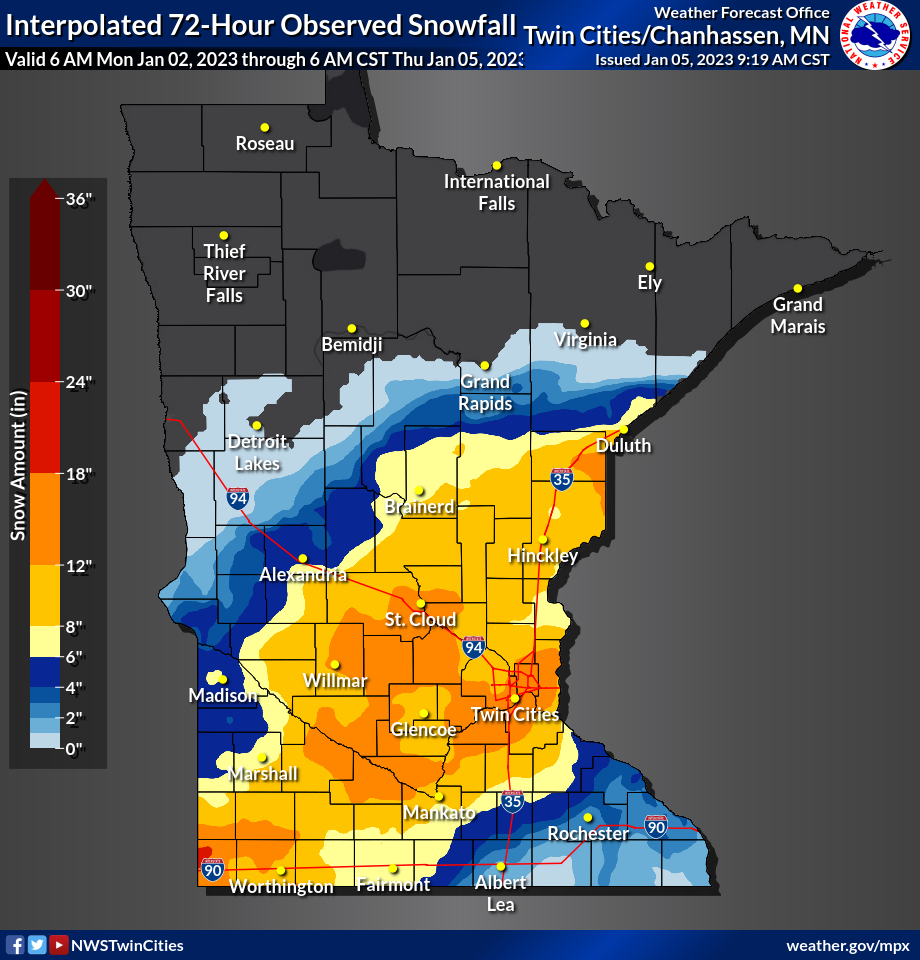 72-hour snowfall over Minnesota through Thursday morning, January 5, 2023. The mapping techniques used may "smooth out" higher values in some areas, and thus, the 12-18" zone may appear slightly smaller than it was in reality.
Map courtesy of National Weather Service, Twin Cities/Chanhassen

The far southern parts of Minnesota, generally along I-90, received of around a quarter-inch of ice, with a few higher amounts reported. Most of the rest of the state primarily had snowfall accumulations, though most areas had sleet and freezing drizzle mixed in periodically Tuesday and Wednesday.

Snowfall accumulations of 8-15 inches covered much of southwestern, central, southern, and eastern Minnesota, including Pipestone, Marshall, Redwood Falls, Willmar, Mankato, Northfield, St. Cloud, the Twin Cities, and parts of Duluth. Some even higher amounts were either reported or suspected based on examining adjacent observation periods. The largest snowfall totals occupied three parts of the state:

This was an unusually "wet" (high moisture content) storm for January, though it was not an all-time record-setter and was not unprecedented. Much of southern and central Minnesota received over three-quarters of an inch of precipitation, and quite a few communities recorded over an inch of total precipitation. Rochester broke a daily precipitation record for January 3rd, with 1.12 inches, falling almost entirely as freezing rain and rain, with only 0.9 inches of snow reported for the date. In the Twin Cities, 1.26 inches of precipitation had been recorded from January 3rd through noon on January 4th, ranking this system third all-time for 2-day precipitation totals during January. 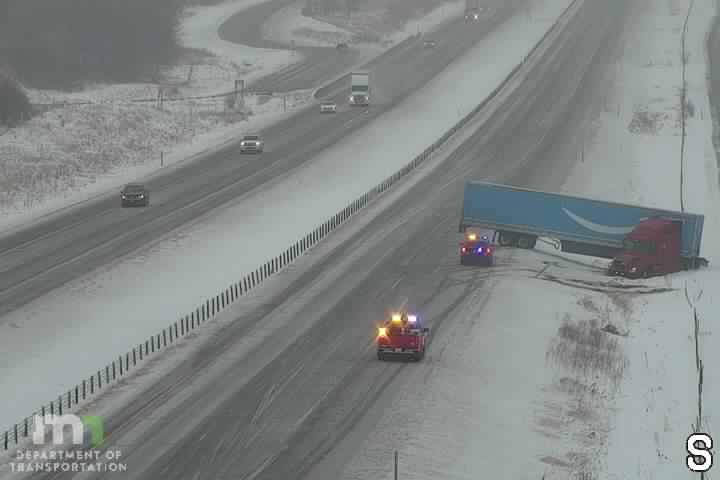 The greatest impacts by far were on Minnesota's roads, which, depending on where one was, became snow-clogged, icy, slushy, or all of the above. Minnesota's State Patrol reported over 1000 spinouts, about 350 crashes, and 23 jackknifed semitrailers from late morning on January 3rd through late afternoon on January 4th. Although the snow was heavy and wet, it did not begin sticking to tree limbs until early Wednesday morning, which helped the state avoid the widespread tree damage and power outages that accompanied the large mid-December storm.

A Snowy Start to Winter

This storm was the latest in a sequence of rather large and intense winter weather systems to affect Minnesota. Through January 4th, each of Minnesota's five first-order climate stations had above-normal snowfall for the season to date, ranging from 16% snowier than normal at International Falls, to 136% snowier than normal in the Twin Cities.