Geology is the study of the history of the earth, which includes its rocks and fossils. 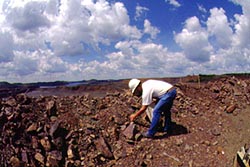 Geologists break time down into geologic time units called eras. Each era contains smaller time units called periods. Check out our Minnesota geologic time table. Its columns show the different eras and periods of time; what kind of rocks were formed in Minnesota; what geologic events were happening in Minnesota; and what kind of animal life existed during each era and period. Look down the columns "Rocks in Minnesota" and "Events in Minnesota." Why is there no information during some periods? The answer: no rocks from these time periods have been found in Minnesota! The rocks were either destroyed, eroded away, or never formed. Without the rocks, it is harder for geologists to tell what was going on in Minnesota during these periods.

The Lands and Minerals Division staff includes geologists, biologists, hydrologists, foresters, geographers, lawyers, computer experts, office assistants, accountants, technicians, mining engineers, and chemists. The staff works to ensure that all stages of mining are done in an environmentally safe way and that money is generated for the state and its citizens.

What does the Lands and Minerals Division do?