Taconite is a low-grade iron ore. When the high-grade natural iron ore was plentiful, taconite was considered a waste rock and not used. But as the supply of high-grade natural ore decreased, industry began to view taconite as a resource. Dr. E.W. Davis of the University of Minnesota, along with other scientists and engineers, conducted years of laboratory tests and experiments to find a way to take the iron ore out of the taconite rock. After many years of hard work, a process was developed to create taconite pellets. Taconite saved Minnesota's iron ore mining industry. 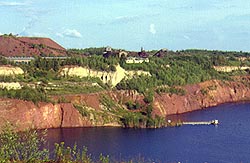 The Hull Rust Mahoning Mine in Hibbing, Minnesota

Let's look at how the taconite pellet process works.

Taconite is a very hard rock. Using explosives, the taconite is blasted into small pieces.

The taconite pieces are scooped up by electric shovels. Each shovel can hold up to 85 tons of rock! The shovels place the taconite into giant dump trucks. These trucks are as big as a house and hold up to 240 tons of taconite. The trucks take the taconite directly to the processing plant, if it is nearby, or to train cars if it is far away.

At the processing plant, the taconite is crushed into very small pieces by rock crushing machines. The crushers keep crushing the rock until it is the size of a marble. The rock is mixed with water and ground in rotating mills until it is as fine as powder.

The iron ore is separated from the taconite using magnetism. The remaining rock is waste material and is dumped into tailings basins. The taconite powder with the iron in it is called concentrate.

5. Pellets
The concentrate (the wet taconite powder) is rolled with clay inside large rotating cylinders. The cylinders cause the powder to roll into marble-sized balls. (This is like rolling wet, sticky snow into balls to make a snowman). The balls are then dried and heated until they are white hot. The balls become hard as they cool. The finished product is taconite pellets.

Taconite is mined from the Mesabi Iron Range, near Hibbing, MN. Then it is processed into pellets and moved by train--or on ore boats from Duluth--to ports and steel mills around the Great Lakes region.