Fossils - clues to the past

Fossils are the remains of plants and animals found in rock. A fossil can be many things: a bone from a dinosaur, the tooth of a shark, a sea shell or a footprint.

Fossils provide clues to what life was like in Minnesota in ancient times. They can tell us many things about the past. We can see how dramatically life has changed through time. We can also use fossils to develop a history of the earth and its living inhabitants by recognizing the fossils of the ancestors of plants and animals that are living today. Many plant and animal fossils have no living relatives. This type of information aids in recognizing the evolution and extinction of species. Knowledge of extinction can help scientists protect species today. Fossils also help to determine the age and the environment in which rocks were formed. By determining the past environment, geologists are able to make better decisions in the search for mineral deposits. 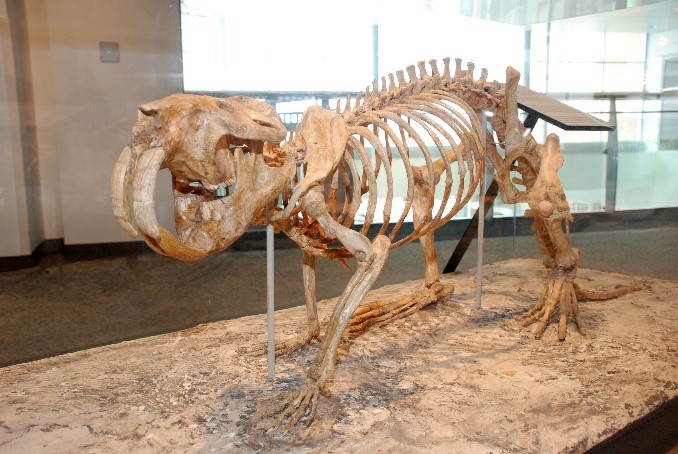 Fossils can tell us many things about large animals, called megafauna, that lived in certain areas or habitats. For example, millions of years ago during the last great Ice Age, giant beavers roamed land that is now the Twin Cities area. Today, Minnesota's state fossil is the Giant Beaver (its scientific name is Castoroides ohioensis). The name Giant Beaver is fitting for the massive 200-pound mammal – matching the size of a small black bear – that had long teeth and a super strong jaw.

How are fossils made?

Fossils form when animals that have died are quickly buried by sand, mud or another sediment. The soft parts of the animals are destroyed by bacteria, leaving only the hard parts, such as teeth, shells and bones. Other fossils are formed when footprints or other depressions that were created by animals long ago are quickly covered by sediments. Plants can also become fossils. The best fossils are found in sedimentary rock formations that have remained relatively undisturbed since they were deposited.

Some fossils can also be energy resources. Decaying animal and plant matter can create fossil fuels, such as coal, oil, gas and peat. Of these, only peat has been found in Minnesota. Northern Minnesota counties with large peatlands include Koochiching, Beltrami and Lake of the Woods.

Are there fossils in Minnesota?

Fossils may be found throughout the state of Minnesota, but are more common in certain areas. The oldest fossils in the state are found in the Precambrian iron formations in northeastern Minnesota. These primitive algae fossils are over two billion years old! They were one-celled organisms that lived in the shallow seas that covered much of Minnesota. More advanced, multi-celled animal fossils can be found in southeastern Minnesota, which was covered by a shallow sea that reached up from the Gulf of Mexico during the Ordovician Period, 440 million years ago. Trilobites and cephalopods are examples of these multi-celled animals.

During the Devonian Period (380 million years ago) southern Minnesota was once again covered by a sea, leaving fossils of fish and corals scattered throughout the area. Fossil snails, clams, oysters and shark teeth can be found in north central Minnesota dating to 100 million years ago (the Cretaceous Period).

Fossils of all ages can be found throughout Minnesota's gravel pits, beaches and other glacial features. As glaciers slowly crawled south from Canada to cover almost the entire state, they picked up rock containing fossils. As the glaciers retreated north, the rock and debris were left behind in Minnesota as glacial drift.

How do you collect fossils?

Collecting fossils is something anyone can do. All you need are a few simple tools and permission to collect. Make sure you ask the person who owns the land you are on before you start collecting specimens.

The "Guide to Fossil Collecting in Minnesota" (MGS, 1965, out of print) suggests these fossil collecting tools:

More ways to learn about Minnesota's fossils, check out the Minnesota Geological Survey.