To be able to "read" the stories rocks tell us, we first need to know what rocks and minerals are.

Minerals are naturally occurring chemicals, or combinations of chemicals. Minerals are not formed by living things, so they are called inorganic. There are over 3,500 known minerals in the world today!

Rocks are made of minerals. They can be made of a single mineral or a combination of several minerals.

There are three main types of rocks: 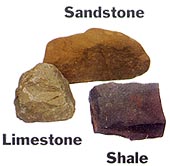 2) Sedimentary rocks are formed from bits and pieces of rock which have broken off. These bits and pieces are called sediments. The sediments were carried by water and wind and dropped to a new location. The sediments are piled layer upon layer and pressed or cemented together to form a new kind of rock. The most common sedimentary rocks are sandstone, limestone, shale, and conglomerates.