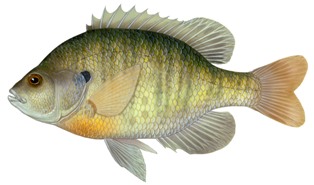 The bluegill sunfish has a round, flat body that is four to ten inches long. The body is greenish-blue in color with an orange belly. The solid blue/black "ear" spot distinguishes the bluegill from other sunfish species. This fish is a great target species for youth. Try using foam flies or small nymphs near vegetation.

The largemouth bass is a member of the sunfish family and is found in many FiN ponds. This fish has a large jaw that extends beyond the eye and can grow from six to twenty-four inches in length. It is green in color with a dark lateral strip down the side of its body. Try streamers or large bass poppers around lily pads in the summer.

The smallmouth bass also has a large jaw but its upper lip extends to the middle of the eye. This fish has a bronze colored body with dark vertical bars. Smallmouth bass are found near rocks and boulders or near submersed woody debris. Common in many rivers in Minnesota, smallmouth bass grow to be six to twenty inches long and are present in several FiN ponds. Crawfish patterns and large poppers are go-to flies when fishing for smallies.

The brook trout is a medium-sized fish with a light belly and sides.  Its back is dark green to nearly black with light wavy lines and speckles. Some spots are red with blue rims. Brook trout need clean, cool water with lots of oxygen. They can be found in both streams and lakes in Minnesota. Size 12-20 flies should be used for brookies.

The brown trout has a light brown streamlined body with a square tail. It has pale brownish green sides with dark and red spots with light-colored rings.  Its dorsal fin is spotted.  Brown trout are also coldwater fish but thrive in warmer water than brook trout and will eat larger food items. Try using larger flies and streamers to fish for this species.

The rainbow trout has dark spots on a light background. Its back is olive green and its sides have a pink stripe. The tail is covered with small black spots. Rainbow trout are also coldwater fish but can survive in warmer waters than some other trout species. They spend their first few years of life in tiny streams, then migrate down to larger bodies of water.