Trolling with your boat on Lake Superior

The lake can be fished from shore, charter boat or, when weather conditions are favorable, 16- to 18-foot boats commonly used for walleye and bass fishing. 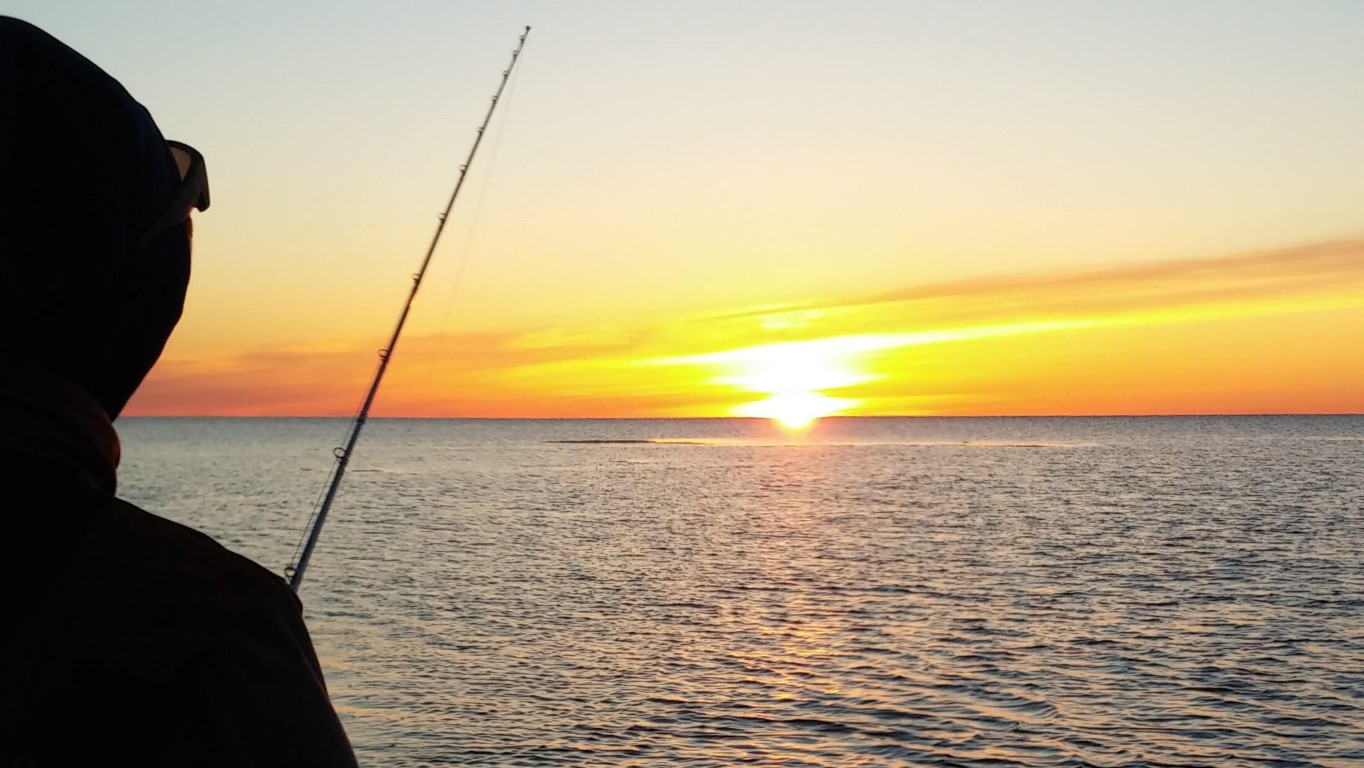 Lake Superior offers year-round fishing for rainbow trout and brown trout as well as chinook, coho, and pink salmon. Check the fishing regulations for details on the special regulations and seasons for brook trout and splake, which typically start in mid-April and close in early September.

Similarly, check the regulation book for details on the lake trout season, which is open except for the period after the first weekend in October through November.

Unlike Minnesota's other 4,500 fishing lakes, Lake Superior features open water in the dead of winter. Boat launching sites may be iced-in or unplowed during this time but when they are not and the weather is favorable some anglers enjoy trolling near-shore waters for coho salmon and rainbow trout.

Water clarity can affect fishing for trout and salmon. Water clarity is highly influenced by rain runoff, particularly in spring and early summer. Anglers often do well when fishing along the edges of the cloudy plumes that flow from the west end of the lake near Duluth.

The key to fishing Lake Superior is to focus on where fish are located throughout different times of the year based on water temperature and water clarity. In practice, this means fishing closer to shore and higher in the water column from December through May. That’s because near-shore water temperatures are cold enough to hold trout, including the prized lake trout.

It is common to catch near-shore trout and salmon in water less than 30 feet deep. Trout and salmon move off-shore to deeper water locations in late spring as near-shore water temperatures rise but still tend to occupy the upper water column (60 feet or less). When the surface gets warmer, lake trout move to cooler, deeper water, often below 90 feet, and can be reached with downriggers.

During spring, summer and fall, anglers often travel off-shore and commonly fish in water 75 to 200 feet deep. Still, a lot of high-quality fishing occurs near the surface. This is particularly true for those pursuing salmon, brown trout and rainbow trout, which prefer warmer surface water to the colder water near the bottom.

When jig fishing deep water, the best approach is to locate structure changes as shown on a depth finder or topographic map. For example, good places to drop a jig for lake trout include immediately above rock piles or boulders, along underwater cliffs or other places where structure changes in a significant way, such as an underwater point that features various depths along its length.

Salmon numbers are typically higher near Duluth during and immediately following the cold weather months. This is likely due to the south end of the lake warming faster than locations further up the North Shore. As summer progresses, salmon fishing steadily improves farther north near Silver Bay and Grand Marais.

Lake trout can be caught via active rod and reel jigging, or by passive placement of a set line on a tip up rig. A tip-up rig is different than a rod-and-reel combination because there is no rod at all. Instead, a tip-up is an apparatus in which the reel is placed in the hole you drilled, and when a fish unspools line a signal flag “tips up.” Tip-ups can be purchased at virtually any bait shop or retail fishing outlet.

Once you have lowered your tip-up line into the water it is largely a waiting game. It is smart to check your sucker or shiner minnow every half hour or so, and even to jig it once in a while. You can use a live or dead bait; lake trout are opportunistic predators. A tip-up is a great way to utilize a second fishing line, which is allowed while ice fishing on Minnesota inland waters.

When fishing as part of a group, it makes sense to apply some strategy as to where you drill your holes and how deep to suspend your minnow in each hole. For example, if fishing a deep drop-off, you may want to place tip-ups at the 40-, 50- or 60-foot contour. Similarly, if you are fishing a point that extends into the lake you may want to set tip-ups at various depths along the point, starting in shallow and then drilling additional holes every 20 or 30 yards into deeper water. You must fish within 200 feet of your tip-ups.

Once a flag does fly, avoid the temptation to run toward it. Ice is slippery and there is no sense hurting yourself. Grab the tip up, raise it slowly to not create too much resistance, and grasp the line. If the fish is still swimming with your bait, set the hook with a quick snap of the wrist and arm. If 15 seconds or more have passed and this fish is swimming slowly – or you simply feel a dead weight on the line - well, that’s is a good time to set the hook too. It’s also possible that you’ll feel nothing at all. That means the fish has dropped your minnow.

When fishing lake trout with a jigging rod, use a medium heavy or heavy rod. You’ll be fishing heavy baits to cover the water column quickly and the fish you catch can be anywhere from a couple pounds to as large as ten or twenty pounds. You could even hook into a trophy of 30 or 40 pounds. Inspect your bait and jig it in the hole. Try to learn how to make it swim and dance delectably, and commit to memory the cadence used to impart the action. You’ll need to use the same delivery to your bait under the ice.

A reel with a line counter is helpful for calculating lure depth and lure distance from the back of the boat. Typically, lures used with planer boards are trolled at least 100 feet behind the boat.

For trolling, the gear is placed in a rod holder after the lure is deployed. The key to effective trolling is to constantly experiment with different lures, lure colors, depths and speeds until you catch fish. Common lures include spoons, stickbaits and dodger/fly combinations.

Some anglers troll at shallow depths with copper or lead core weighted line that is marked with alternating colors called longlines. Lure depth is determined by the number of colored sections that are out, the speed of the boat and the type of lure. Lures attached to weighted line are often fished more than 200 feet behind the boat. Longlines are often fished out the back of the boat while planer boards are fished to the sides.

For fishing in deep water, downriggers are mounted on solid surfaces near the back of a boat, which requires more advanced preparation and more commitment to having the gear on the boat than is needed for trolling with shallow water gear or when jigging. Downriggers consist of a wire retrieval winch, wire line, a weighted ball and a clip to which the actual fishing line is attached. Regardless of what gear types you are fishing, a key to successfully landing a fish is to keep other lines out of the way when a fish in on a line.

Fishing gear on Lake Superior includes the usual must-haves for fishing, such as personal floatation devices, pliers and line-clipper. Also good to have is a long-handled landing net large enough for a big lake trout.