Andersons focus on sustainability – of family farm as well as groundwater

Sustainability -- it's a word the Minnesota Department of Natural Resources employs often to describe practices that allow something such as groundwater to be used in a way that benefits people today, tomorrow and long into the future.

For Jim Anderson, sustainability is something much more personal. It's about making sure that his family farming operation can continue to provide a decent living for his children and grandchildren. And part of that is practicing good water conservation.

Anderson is the fourth generation on land that his family has been farming northwest of Belgrade, Minnesota, since the 1880s. Before he started irrigating in the 1970s, his farm consisted mostly of beef and dairy cattle, with a few hogs. The crops that came off the sandy soils in the area didn't amount to much – some small grains and silage.

Today Anderson, along with sons Grant, Noah and Isaac, and his brother John, grow sugar beets, kidney beans, sweet corn, peas, some soybeans and oats. They also run a 2,500-sow farrow-to-finish operation, and they feed hormone-free beef cattle for export to European markets. The operation has grown from 1,000 acres to about 7,000. A key component in that growth has been a ready supply of groundwater for irrigation. 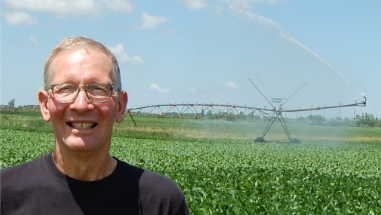 "Before irrigation, 100 bushels of corn per acre was phenomenal," Anderson said. "It was pretty subsistence back then. Now you can get 230 to 240 bushels."

Anderson started irrigating in the early 1970s, using a traveling gun, an early type of irrigation mechanism consisting of a pump on a trailer that shoots a fountain of water high into the air as it travels across a field. He quickly saw the benefits. In 1973, he installed his first center pivot irrigation boom, adding one or two each year for a number of years after that. Today he has 77 center pivots drawing from 50 wells. Irrigation provides insurance against uncertain weather, and it expands the variety of crops he can successfully raise, because some have specific water needs at certain times during their growth.

"Without irrigation, I wouldn't have been farming," said Jim's son Grant Anderson. "If there was no irrigation, it would drastically change the local economy, not just farming."

That's why, when DNR first started working with the community to create the Bonanza Valley Groundwater Management Area plan several years ago, some people felt apprehensive. With so much depending on a reliable source of affordable groundwater, people were concerned that their livelihoods and way of life might be affected. Over time, those fears have been largely allayed as area farmers have come to realize that the point of the plan is not for DNR to tell them what they can and cannot do, but to identify steps for making sure that people can sustainably continue to reap benefits – and crops – from local groundwater resources. The area includes portions of Pope, Stearns and Kandiyohi counties, roughly between Glenwood and Paynesville.

"It's good to have a plan in place," Jim said. "It was important to be on the team that developed the plan.

An important component of the Bonanza Valley groundwater management plan is conservation, something the Anderson's have been incorporating into their operations for some time. They use low pressure systems that allow for less water to be blown away. They have variable speed drive systems and they're starting to experiment with soil moisture sensors that can turn irrigation off when it's not needed. They've outfitted half of their irrigation pivots with cell phone telemetry so that they can be turned off and on remotely.

"You couldn't manage the acres you do without them," Grant said. "You hear the thunderstorm at four in the morning while your head is on the pillow and you can take care of it. Before, you'd have four to five hours work driving around."

The Andersons admit that they have an innovative, early-adopter mindset when it comes to technology. While upfront costs might cause some sticker shock, they've gotten into the habit of including a certain amount of money in the farm's budget for technology. It's not only a matter of good resource stewardship; with electric rates continuing to climb, it's good for the bottom line, too, and for the future of the family farm.

"This is a legacy farm," Grant said. "My son will be the sixth generation. You're always looking ahead."

For more information about the Bonanza Valley Groundwater Management Area: