Bob Brauchler hesitates to call himself a conservationist, although he is one – even if it’s only by accident.

The farming practices he’s honed over the past 40 years near Paynesville may be focused on his bottom line, but they’re also helping preserve and protect the precious groundwater resources in central Minnesota’s Bonanza Valley area.

On his farm, you can find lands enrolled in the Conservation Reserve Program (CRP), computer-controlled irrigation systems, and uniformly green crops – all thanks to his ability to embrace change in the farming industry. 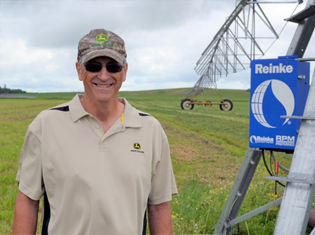 Early on, his farm’s varied topography was his financial hedge – his river bottom land would save him in the dry years, while the high ground would bear the productive load during the wet years. However, when his farm encountered both conditions in the same year, he decided to enroll that river bottom land into CRP. It was a way to reduce risk and protect the land while still getting a guaranteed income from the less-productive parts of his land. His other method of guaranteeing income was to irrigate some of his high, sandy ground, which he did in 2015. His remaining dry upland was enrolled in CRP.

His high-tech irrigation system is more than a simple tool for a financial hedge. Compared to less sophisticated systems, his has innovative technology that provides opportunities to save money – and water – by allowing more precise application.

Yes, water, in the seemingly limitless aquifer that supplies the area known as the Bonanza Valley. Its conservation is a concern to the Minnesota Department of Natural Resources, because increasing demands put on groundwater in the area may not be sustainable unless steps are taken to more closely manage its use. That’s why the DNR worked with area farmers and others to develop the Bonanza Valley Groundwater management plan several years ago. But some farmers like Brauchler are finding that conserving water also saves money.

“You don’t want to waste money. It makes you conserve,” Brauchler said. “It’s not cheap pumping water out of the ground.”

He has a conservative approach to his water use, and he’s also trying to be smart about it. For starters – his irrigation system is smart. It’s controlled by cell phone signals, giving him greater control of when the irrigator runs. He monitors weather forecasts to ensure he’s not using the irrigation system unnecessarily; he also uses only the amount of water that’s needed. All these measures help him to conserve that precious groundwater for the inevitable dry year that is sure to come.

But it’s his handling of nitrogen applications that may be his most economical practice on his farm. His “fertigation” method – infusing nitrogen fertilizer into irrigation water – minimizes nitrate runoff and leaching into groundwater while maximizing crop absorption. “Spoon-feeding” the nitrogen to the crop had an immediate impact during its first year, allowing for a drastic reduction in nitrogen use.

“We grew 27 tons of silage per acre. I didn’t need a fourth of the nitrogen I thought I was going to,” he said. “The first year, the nitrogen I saved probably paid for that system alone.”

Brauchler’s first venture with that method on his corn field came late in the growing season. He used fertigation to apply nitrogen while the corn was tasseling. It’s something that couldn’t happen with traditional fertilizer application methods.

“That’s when corn (the tasseling process) really needs a lot of nitrogen,” said Brauchler. “I use way less nitrogen by applying only the amount that’s needed and when it’s needed. Otherwise you have to put your nitrogen on in the spring and hope that it doesn’t wash away.” Brauchler used tissue sampling to determine the health and nitrogen needs of his crop. That first year, he was scheduled for another nitrogen application. However, the test concluded his corn was healthy enough, which allowed him to forego the added expense of another nitrogen application.

“It more than pays for itself the first year because of the nutrients you save,” Brauchler said. “Some places you don’t need any fertilizer and some places you need a lot more.” The resulting fertilizer applications give him more consistent results among his fields. “Since I’ve started doing that, the fields look a lot more even,” he said. “Where years ago, you’d look, there’d be spots that crops that look beautiful, and spots that look cruddy.” While all of these measures help to improve Brauchler’s bottom line, they’re also creating a more sustainable environment. His CRP lands help improve water quality by increasing water and nutrient absorption, slowing runoff and reducing erosion while providing wildlife habitat. His conservative approach towards his irrigation system can help to ensure water supplies for future generations.

Then, there’s his farm’s precision ag component. His “spoon-feeding” of nitrogen ultimately gets it to where it’s needed – his crop. It places less nitrogen on the landscape and allows much less to leach into groundwater and run off into waterways. Grid sampling provides the roadmap of where – and where not – to apply fertilizer, again minimizing leaching and runoff in a part of the state that’s experienced nitrates in water supplies.

The 21st century farming techniques he’s employed are working for him and his operation. But they’re also working for water quality and water quantity in the Bonanza Valley. While Brauchler isn’t quick to label himself a conservationist, there’s little doubt that he is. He just receives the added bonus of a more profitable farm – and that’s the kind of conservation all operators can find attractive.