City invests in future of water

As a major user of groundwater in the Bonanza Valley, the city of Glenwood’s leaders know the important role they play in protecting its most precious resource; water. 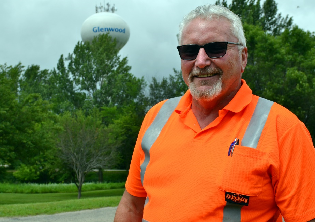 Nestled between the hillside and the banks of Lake Minnewaska, this city of 2,500 residents depends on water more than many Minnesota cities. And that is precisely why its leaders have made a conscious and intentional effort towards conserving and protecting its groundwater supply.

The city is an important partner in the Minnesota Department of Natural Resources’ efforts to make sure there continues to be sufficient groundwater for city residents to drink and for area farmers to use for irrigating their crops. A growing demand for groundwater in the area led DNR to work with local interests to create the Bonanza Valley groundwater management plan several years ago. Now, major groundwater users such as Glenwood, as well as area farmers, are increasingly embracing conservation as a standard practice.

David Perryman has been working for the Glenwood Public Works Department for the last 32 years. He’s proud of how city leadership has embraced conservation and protection practices in that time.

“When I started here, we lost around 50% of our treated water through leaks in our system,” Perryman said. “We are now around 10% loss.”

Perryman and the city have achieved that progress by taking a progressive stance towards eliminating wasted drinking water. The public works department has replaced aging water mains during street construction projects, replacing 13 city blocks of water and sewer alone in 2018 during a MnDOT project in town. It also works with an outside contractor to detect leaks in existing pipes every year.

“That’s water we were spending money to treat,” Perryman said. “It’s more economical to keep the water in the pipes.”

Taking that track even further, Glenwood invested in a computerized pump monitoring system in 2018, which allows city workers to track water use and the well’s recharge rate. It provides them daily updates on the overall health of the well, replacing the semi-monthly measurements that were less useful.

“It does cost a lot of money,” he said. “But it saves you money from Day #1 because it allows you to tighten control and manage that system. Maybe you can cut down the number of times the well runs in a day.”

As his body of knowledge surrounding water has increased, so has Perryman’s efforts to protect Glenwood’s quantity and quality of water in its well. The city has changed its approach to stormwater by encouraging the use of retention ponds. Those stormwater ponds allow water to recharge underground aquifers in the area’s porous soils on its hilltops rather than sending it downhill and directly into Lake Minnewaska. The city has also worked with a number of agencies, including the Minnesota Department of Natural Resources to protect and conserve water from the aquifer it shares. One of the most visible examples is its wellhead protection area, established with help from the Minnesota Department of Health. While he and others were skeptical at first, it’s something Perryman now sees as vital to the protection of the city’s drinking water supply. They’ve worked with homeowners and industries to help them better understand the function and purpose of a wellhead protection area.

“We have great support of our residents and full support of our community,” Perryman said. “Once the wellhead protection concept was explained to folks, it became a no-brainer.”

While that’s a sizeable list of accomplishments, Perryman knows that there’s still plenty of work that remains. The city continues to work with state agencies on helping to educate its citizens in a number of ways.

The city includes conservation-themed flyers in city utility bills and is sharing water and wellhead protection information on the city’s website. They’re also sharing conservation messages with students at local schools and posting them at the city’s informational kiosks sprinkled throughout town. Residents around the city can find rain barrels at various businesses and city parks.

The city’s public works department is also leading by example. As water fixtures like drinking fountains and public toilets age out, they are being replaced with low-flow fixtures.

Perryman continues to put water conservation and protection practices in front of Glenwood’s citizens so they continue to see conservation practices at work, and he says he’s more than happy to talk to anyone about protecting the city’s drinking water. While he acknowledges there’s still work to be done, he happily reports that they’re gaining ground in that battle.

“As a whole,” he said, “our community likes to protect the water supply.”

That evolving mindset is working to protect the aquifer Glenwood shares in the Bonanza Valley, ensuring viable water below and above-ground for its citizens and visitors for generations to come.