Learn the difference between doves and protected birds! Identifying mourning doves accurately to avoid shooting birds protected by state and federal migratory bird laws. These are protected bird species that could be confused with doves in flight:

Common nighthawk - Common nighthawks migrate in September, during the mourning dove hunting season. They circle in loose flocks over wooded areas and along streams. The dark brown nighthawk has a conspicuous white spot on each wing of the primary feathers. Mourning doves do not have this spot.

American Kestrel - Sometimes referred to as a "sparrow hawk," the American kestrel is a small falcon often found in the same open rural habitat as mourning doves. Female kestrels have a generally reddish body; males have a reddish body with bluish-gray wings. Both sexes have gray heads and two black vertical marks on their cheeks. Kestrel tails are flat across the tip. Kestrels often sit on power lines along roadsides and frequently hover in a stationary position above roadside ditches as they hunt for field mice or grasshoppers. When in pursuit of prey, they may dive to the ground or pursue prey with a strong, steady wingbeat similar to that of a dove.

Killdeer - The killdeer is a shorebird often found in open agricultural fields far from water and in the same habitats used by mourning doves. Killdeers have two dark bands on their breast. In flight the underside of the body is white, in contrast to the buffy gray undersides of the mourning doves, and the tail is flat across the top. Killdeers have a distinctive "kill-deer" or "dee-ee" vocalization. 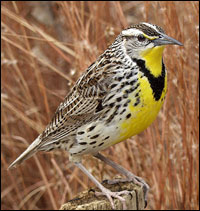 Meadowlarks- Both Eastern and Western Meadowlarks are frequently seen in the same grassy open habitats that mourning doves use for nesting and feeding. They are a stocky, brownish songbird with a yellow breast that is highlighted by a black V-shaped chevron on the upper breast. They may perch on fence posts or power lines, or flush from the ground in areas hunted for doves.