The Fargo-Moorhead area is a regional center for healthcare, education, government, and commerce.

This area has a high risk of flooding. The Red, Wild Rice (in North Dakota), Sheyenne, Maple, Lower Rush, and Rush Rivers all contribute to the flood risk. Average annual national economic flood damages in the metropolitan area are estimated to be more than $51 million, and a failure of emergency flood measures could result in loss of life.

Flooding in Fargo-Moorhead typically occurs in late March and early April due to spring snowmelt. Flooding poses a significant risk of damage to urban and rural infrastructure and disrupts transportation throughout the metropolitan area. 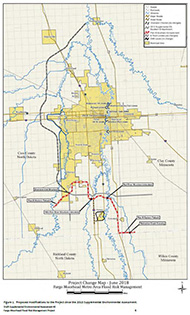 Plan B would reduce flood risk for an estimated 56,000 acres currently in the 100-year floodplain. In part, it would accomplish this by storing flood waters on about 28,000 acres within an upstream staging area. When operated, Plan B would divert a portion of the flows from the Red, Wild Rice, Sheyenne and Maple Rivers, intercept flow at the Lower Rush and Rush Rivers, and return it to the Red River downstream of the Fargo-Moorhead urban areas. Flows would be controlled via two dams, one on the Red River and one on the Wild Rice River.

Compared with the previously proposed project, the Plan B Project changes the alignments of the Southern Embankment, the Eastern Tieback and the Western Tieback. Plan B also allows more water to flow through the Fargo-Moorhead metropolitan area during project operation. Relative to the earlier project, Plan B reduces the size of the inundation and staging area and eliminates the need for the Comstock Ring Levee, among other implications. 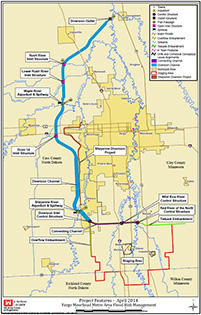 The DNR completed an EIS for the previously proposed project in June 2016, and denied a permit for that project in October 2016. Documents related to those earlier processes are available on the project Environmental Review and Permit web pages.