Russian olive (Elaeagnus angustifolia) was introduced to North America as an ornamental shrub and as a windbreak plant in the late 1800s. It takes over streambanks, lakeshores and prairies, choking out native vegetation. It can also change nutrient cycling and tax water reserves.

Russian olive is a large deciduous shrub or small tree that grows up to 25 feet tall. It has spreading branches that form a dense and rounded crown. It has distinctive silvery scaling on the undersides of leaves, making it easy to spot from a distance.

Leaves are alternate, distinctively silver-gray and lance-shaped. They are 1-4 inches long and up to three-fourths inch wide, with smooth edges. Thin bark comes off in narrow, elongated, fibrous strips. Twigs are very flexible and sometimes have thorns, which can be up to two inches long. Young twigs are covered in silvery hairs, then become reddish-brown and shiny as they mature.

Bell-shaped flowers are creamy-white to yellow in color and fragrant. The showy flowers are in clusters of one to three flowers along the twigs at the base of the leaves and bloom in early spring to early summer.

Dry, olive-like, hard fruits mature in late summer and persist on the plant through the winter. Seeds are contained in yellow-brown berries that can become silvery and shiny when they mature. Seeds are spread mainly by birds and remain viable in the soil for three years.

Russian olive has a deep taproot and extensive root system. It can propagate vegetatively by sprouting from buds formed where the stem meets the root (called the root crown) or directly from the roots.

Russian olive roots have a relationship with bacteria that can fix nitrogen in the soil, changing soil conditions. It can tolerate shade and a wide variety of soil moisture conditions. It is often found along forest edges, in the interior of open woodlands, in abandoned agricultural fields and along roadsides.

Russian olive is native to southern Europe and western Asia. It was introduced to North America as an ornamental shrub and as a windbreak plant in the late 1800s. It can also grow on bare mineral soil, which enabled its use in plantings on mine spoils.

Russian olive is found in many counties in Minnesota. Refer to EDDMapS Distribution Maps for current distribution. 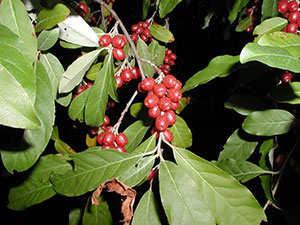 This species is not currently regulated in Minnesota.  Russian olive has not been assessed through the Minnesota Department of Agriculture's noxious weed regulation evaluation process. Russian olive is a restricted invasive species in Wisconsin.

Threat to Minnesota
What you should do

One way that invasive plant seeds and fragments can spread is in soil. Sometimes plants are planted purposefully. You can prevent the spread of invasive plants.

Mechanical control can be done by cutting or pulling the plant by hand or with equipment such as rakes or cutting blades. Regular mowing can also knock back small plants, but it may not kill them.

Herbicide control can be done by cutting stems and applying a product containing glyphosate or triclopyr to the freshly-cut stump using a spray bottle, paint brush, roller or wicking device. Oil-based triclopyr ester products can also be sprayed along the base of an un-cut stem, coating all sides of the lower 12-18 inches of the main stem.These are systemic herbicides that are taken up by plants and move within the plant, which can kill leaves, stems, and roots.

This species is unregulated, but if you would like to add to the public information about this species you can report new occurrences by submitting a report through EDDMapS Midwest