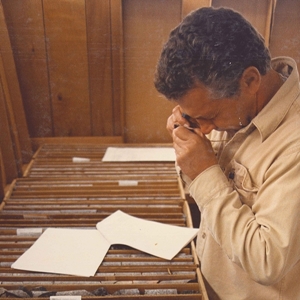 The mineral exploration process varies from site to site and also varies based upon the particular mineral being sought. The explorer's goal for the mineral exploration process is to discover and delineate a mineral deposit that is sufficiently economic to develop into a mine. There are many subsequent steps required after discovery to determine whether the mineral deposit is economically feasible to mine.
Exploration to Development Steps »

Some of the current exploration activity in Minnesota is focused on evaluating the economic feasibility of copper, nickel, and precious metal deposits in the Babbitt-Ely area. There is extensive work involved in the overall process and business of mineral exploration, economic feasibility, and mine development that is beyond the scope of this description. The basic exploration steps, however, are outlined here to describe the temporary impact upon the surface of the land.

The rocks of Minnesota record a long and diverse geological history that spans over 3.6 billion years of Earth history. At various times and in various locations in the Earth's crust, mineral deposits, which is a concentration of one or more valuable minerals at an unusually high content compared to the Earth's crustal average, formed. Subsequent deformation and erosion of the crust often caused these deposits to be moved to inaccessible depths or to be eroded away. Those deposits that are preserved within 1-2 kilometers of the Earth's surface and that have a high enough concentration of metal have the potential to be economically retrieved.

A particular challenge to finding mineral deposits in Minnesota, besides preservation near the Earth's surface, is that the bedrock surface is largely buried beneath a cover of unconsolidated glacial sediments (drift). Exploration companies are searching for mineral deposits in the bedrock. Figure 1 illustrates the depth (in feet) to bedrock or thickness of glacial drift in Minnesota. In some areas of the state (e.g. northeastern Minnesota, windows through the glacial drift expose "outcrops" of the bedrock surface, which provides clues to the geology of the upper crust. However, to more completely evaluate the bedrock geology and its potential to host mineral deposits, a variety of exploration methods are used to "see through" the drift and into the bedrock. 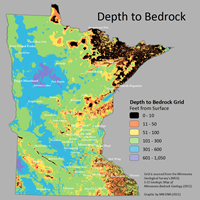 Companies that specialize in exploring for mineral deposits conduct extensive background studies of existing geologic data before starting an exploration program. To identify prospective areas, an exploration company will first conduct a thorough review of geologic maps and reports and study geologic samples or data that are in the public domain. Such information and materials are available from university libraries or state agencies (e.g., Minnesota Geological Survey, Minnesota Department of Natural Resources, Natural Resources Research Institute). For example, it is common for exploration companies to sample and analyze existing DNR Drill Core Library when evaluating the prospectivity of a particular area. While the drill core library can assist exploration it can also limit future exploration drilling in areas that have been drilled and shown to not have a potential mineral deposit. The explorer will seek out areas that previous geologic mapping, scientific studies, or exploration activities have shown contain the "right kind of rocks" to host particular types of mineral deposits. Before exploration can begin in a prospective area, the owners of the surface and mineral rights must be established and permission must be obtained for the right to access lands of interest. For example, state mineral leases provide the lessee the right to explore on state mineral lands. Once permission is obtained, the exploration company will apply various direct and indirect methods to assess the potential for mineral deposits in the bedrock. 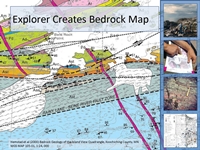 Direct evidence of the geology of the bedrock surface exposed in outcrops is hard to come by in many parts of the state since it is buried under glacial drift (Fig. 1). Even in areas of "good outcrop", the area of bedrock exposed at the surface may only be a few percent. Consequently, bedrock geologic maps (Fig. 2), which attempt to portray the picture of the bedrock surface, incorporate indirect geophysical data and are largely interpretive. The factual aspects of bedrock geologic maps are the outcrop locations, which today are digitally rendered by geographic information system (GIS) software. Attribute data associated with each outcrop is also recorded, such as the types of rock exposed, the orientations of structures in the rock (faults, mineral veins, bedding, layering), and the presence of metallic mineralization. Although all of Minnesota is covered by a bedrock geologic map, most published by the Minnesota Geological Survey, the scale (and detail) of the mapping varies widely. Nevertheless, these maps give explorers at least a general idea of the bedrock geology and what areas might be prospective for mineral deposits. If bedrock outcrop exposure allows and previous mapping was at insufficient detail, mineral exploration companies will commonly conduct their own geologic mapping as their first exploratory evaluation of a site. This process may involve using a hammer and chisel to sample a hand-sized piece of a bedrock outcrop which may get sent to lab for chemical analysis. The environmental impacts are negligible. 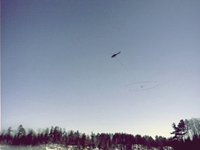 Just as doctors may use x-ray machines, CAT scans, and magnetic resonance imagery (MRI), the explorer uses remote sensing called geophysics. The explorer takes advantage of the variable physical properties of rock formations, such as magnetism, electrical conductivity and density, to narrow down the search for a target mineral deposit. These properties can be measured at specific locations on the Earth's surface or continuously recorded from a helicopter or plane flying over an area (Fig. 3). Geophysical surveys are ideally suited for areas like Minnesota where most of the bedrock surface is buried beneath glacial drift. Because the glacial drift is composed of a homogeneous mix of different rock types, its geophysical properties are largely uniform. Therefore, any variations in measured geophysical properties (anomalies) likely reflect changes in the buried bedrock. While the geophysical anomaly maps created from such surveys tell us the geophysical attributes of the bedrock, they do not tell us what specific rocks and minerals are creating the anomalies. Fortunately, many mineral deposits have distinctive geophysical characteristics. For example, copper sulfide minerals conduct electricity much more than common rock-forming minerals, and metal-bearing minerals typically have higher densities than common rock-forming minerals. Because there are so many conditions that create false anomalies that mimic metal deposits, such as the presence of graphite (carbon) or pyrite and pyrrhotite (common iron sulfide minerals) that are far more common than copper or nickel minerals, this approach by itself is not always sufficient. The Geologic Survey of Finland did detailed exploration for gold and base metals in Finland in the 1970's and 80's, and estimated that they found one economic metal deposit by testing roughly 10,000 of the geophysical anomalies. The environmental impacts from airborne geophysical surveys are negligible.

A ground-based geophysical survey is another indirect exploration method that is focused on a small location generally based upon the general indications of the airborne geophysical survey. This survey is done walking on the ground and often involves backpack-sized instruments. Measurements are often taken along a pre-selected grid of locations. To allow the workers to perform this safely and efficiently while carrying instruments, the explorer may seek permission to cut the brush along the lines. This act is the same as deer hunters do for their shooting lanes. The objective of this survey is often to determine if an exploratory boring is warranted, and if so, where exactly it should be located. The environmental impacts are minor and temporary. 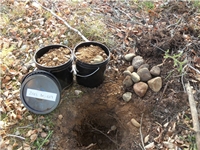 Another common method to explore for a buried ore deposit is to analyze the composition of a set of rock, soil, glacial drift, plant material, lake and stream sediment, or water samples collected at or near the Earth's surface (Fig. 4). Geochemical anomalies, which are above-average concentrations of a chemical element in a sample of rock, soil, vegetation, or water sediment, are created in these surface materials by the dispersal of metals away from a buried metal deposit. This dispersal can be caused by a variety of geologic processes including the natural chemical weathering of a mineral deposit, the flow of groundwater through a mineral deposit, the uptake of buried metals into the roots of plants and trees, and the dispersal of ore minerals by mechanical erosion and transport by streams and glaciers. The elements that are analyzed in such surveys include not only the metals of interest, but also other "indicator elements" that may be more mobile and diagnostic of a particular type of mineral deposit. Interpreting the anomalies created by geochemical surveys requires knowledge of not only the chemistry of the mineral deposits being sought, but also of the way such deposits are affected by surficial geologic processes, and the likely direction that dispersal took place. The environmental impacts of this exploration method are negligible.

After gaining legal access to the land and completing an interpretation of bedrock outcrop data from geologic mapping and geophysical and geochemical surveys, subsurface targets with potential for mineralization are identified and tested by diamond core drilling. The diamond core drill bit is composed of industrial diamonds that allow it to cut through rock and collect a continuous cylinder of rock core, 2-5 inches in diameter. Core drilling is done later in the exploration process in part because it is an expensive operation that can cost up to $100 per linear foot and involve multiple holes. Historically speaking the average depth of an exploration drill hole targeting nonferrous metallic minerals is approximately 1,100 feet with a general range between ~100 feet up to ~5000 feet which is dependent on the geography of the mineral deposit being targeted. Typically, exploration companies will hire a contractor who specializes in exploratory core drilling. Before drilling can take place, the exploration company must get permission from the surface owner to allow the drill rig to access the location that is to be drilled. There are also state regulations in place throughout the exploration drilling process. In Minnesota, drilling is commonly done in the winter when the ground is frozen and the surface impact is limited as seen in figure 5. An exploration hole that is 1,000 feet deep can be completed in less than two weeks of drilling time. The site preparation, sealing of the boring, and site reclamation typically occurs over another two week time-period. After drilling is completed the drill cuttings are covered by local soil materials at the site. The environmental impacts are temporary. The rock recovered in the core is then described in detail and chemically assayed to measure the metal content in the rock. If signs of mineralization are favorable, further drilling will likely follow in order to more thoroughly evaluate the extent and grade of mineralization.