The primary goal of this project is to build the information base necessary to guide mussel conservation efforts in Minnesota for future generations by taking inventory of these natural assets.  Documenting the past and present mussel resource of our state's waters creates a reference condition that allows us to better measure our successes and failures in avoiding the decimation of the mussels fauna that has plagued much of North America.  While mussels are valuable indicators of the health of our waterways and, capture and process organic matter clearing the water and creating habitat for other aquatic life, we have had a poor understanding of the distribution and status of mussels in most of Minnesota. Of the approximately 80 river systems in Minnesota about 68 of these had not been surveyed, and portions of 6 others only partially surveyed prior to this project.

To accomplish this project, we systematically sampled drainage basins, from large river main stems to small streams, creeks, and lakes, to get a comprehensive assessment of the state's mussel resource.  Data collected is managed in the DNR's Natural Heritage Information System (NHIS) and will be used for conservation of mussels species in Minnesota.  These data will also be used to select streams for reintroductions, develop educational materials for public audiences, measure the success of watershed management projects, and to assign legal conservation status to vulnerable mussel species.  Data from the NHIS are widely used by landowners, public agencies, and other users upon request for printed or electronic formats and are compatible with Geographical Information Systems.  A request form for Natural Heritage Information System data is available on the Minnesota DNR's Web Page.  Vouchers of collected mussel shells have been placed in the University of Minnesota's Bell Museum of Natural History or the Illinois Natural History Survey and are part of the statewide mussel database.

Freshwater mussels, commonly called clams, occur throughout the world, but their greatest diversity is in North America, where about 300 species are found. Unfortunately, within the last 100 years mussel communities have declined in abundance and diversity due to dam construction, stream channelization, water pollution and sedimentation, over harvesting, and the recent introduction of the exotic zebra mussel (Dreissena polymorpha). In response, groups such as the American Fisheries Society, The Nature Conservancy, and The Freshwater Mollusk Conservation Society have identified mussels as the most imperiled group of animals in North America. Minnesota's mussel fauna is not exempt from this dilemma; 28 of the state's 50 species are now listed as either extirpated, endangered, threatened, or of special concern.

Freshwater mussels are important components of aquatic ecosystems and are increasingly being regarded as the aquatic "canaries in the coal mine".  They provide critical ecological services such as linking pelagic and benthic food webs, increasing habitat complexity, providing structural habitat for other aquatic invertebrates, and food for fish, birds, and mammals.  Mussels are particularly sensitive to habitat disturbance and pollution, so they are excellent biological indicators of a river's health.  Mussels have evolved a unique parasitic reproductive strategy that primarily involves the use of fishes as hosts for their larval stage.  This relationship allows mussels to disperse wherever their host fish lives or swims to.  However, unlike their host fishes, mussels do not have the ability to rapidly move away from, or avoid disturbances.  Mussels are primarily sedentary in nature and often spend their entire life in a small area of the stream bed, filtering food and oxygen from the water.  Consequently, they are vulnerable to disturbances to their habitats and in need of our protection.

Mussels have long been connected to human economies.  Native American used mussels as a food source, and also carved their shells into utensils, jewelry, and effigies.  In their quest for pearls, early settlers harvested mussels at rates that decimated many local populations.  By the late 1800's and early 1900's mussel shells were again harvested,  and supplied the nation with the principal material for the manufacturing of pearl buttons.  More recently, North American mussel shells were prized as the material of choice for seeding oysters grown in Asia for the cultured pearl industry. 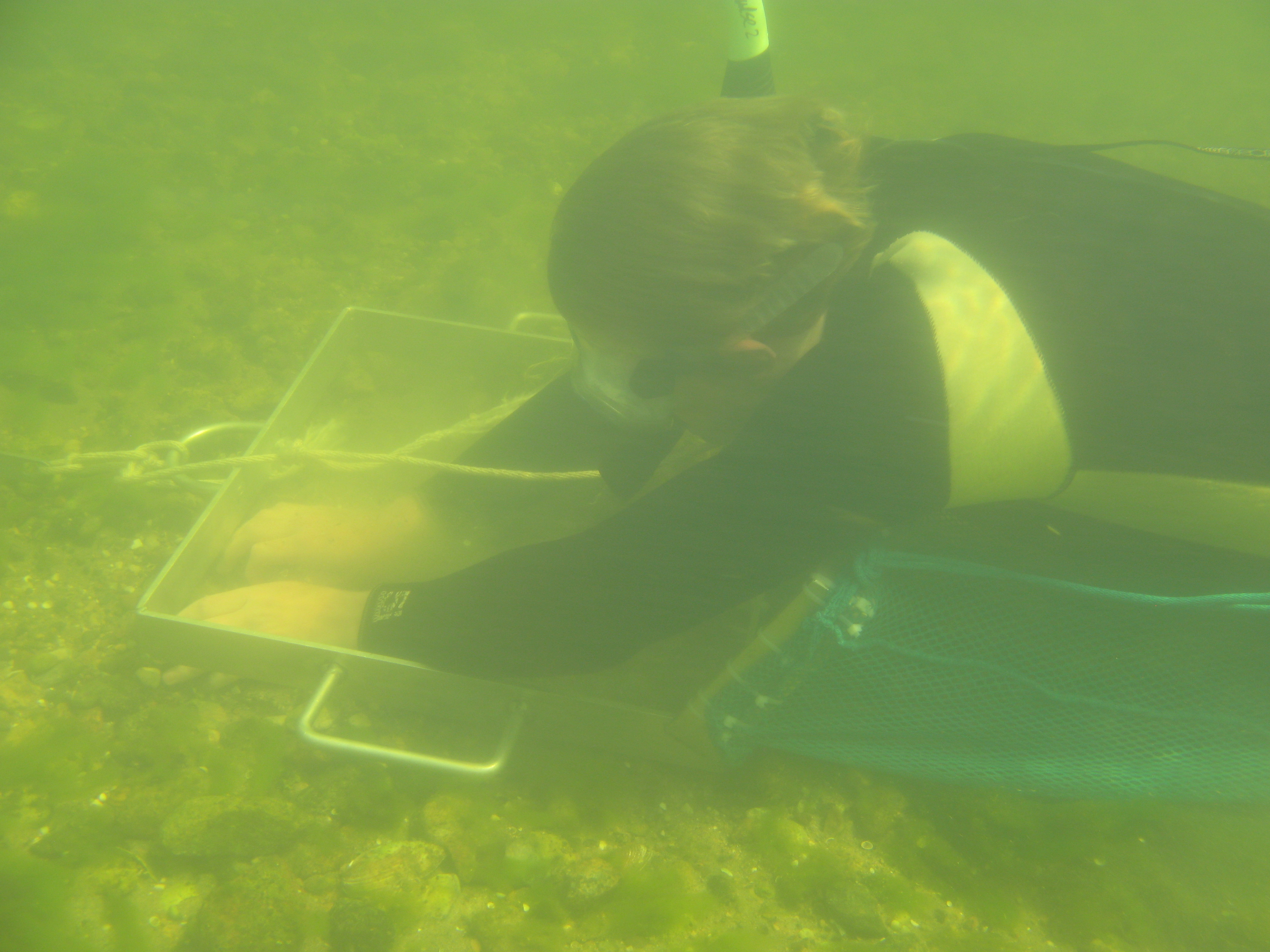 Watersheds were prioritized for sampling based on available information of known or predicted diversity and how recently they were sampled, if at all.  Poorly surveyed streams are compared with the historical range of rare mussel species to identify streams with high probability of supporting these species.  Identification of priority streams also reflects the existence of threats to the stream's health and historical mussel abundance.

Priority streams were surveyed by field crews using a three-step survey protocol.  First, field crews compile available information about the stream from other sources (e.g., fisheries stream surveys, past mussel surveys, soils and surficial geology maps) and then conduct a reconnaissance of the stream to identify access points.  Second, the crew conducts qualitative surveys at

selected sites; collecting mussels during a timed search by either wading, snorkeling, or SCUBA diving to obtain data on species composition and general abundance of mussels populations at these sites.  Finally, the crew conducts quantitative surveys at a subset of sites with high mussel density by collecting 1/4 meter2 whole substrate quadrat samples. Quantitative surveys will provide data on mussels density or abundance, species diversity, size and age structure within a species (an indicator of reproductive success) for these sites.

A concerted effort to survey all of Minnesota's watersheds began on July 28, 1999 and has continued annually during the "warm months" through 16 field seasons.  To date, over 3,500 sites have been sampled totaling 4,400 hours of search time and the collection of 333,000 live mussels of 48 species.  All of the state's 81 watersheds were sampled.  Rivers and streams make up 96.2% of sample sites, samples from 134 different lakes have been collected as well.  Most sampling was concentrated in the Mississippi River and its watersheds below St. Anthony Falls: the Minnesota, St. Croix, Cannon, Zumbro, Root, Cedar, Des Moines, and Missouri River drainages (80% of samples sites), though other major watersheds were sampled also.

Three species were added to the state's list of currently recognized mussels; the pondmussel (Ligumia subrostrata), lake floater (Pyganodon lacustris), and the gulf mapleleaf (Quadrula nobilis).  Populations of the pondmussel were found in the Missouri River drainage, and shells were collected from a few sites in the Blue Earth Drainage (Minnesota River system).  This species is currently listed as a threatened species in Minnesota due to its rarity and declining range.  As the name implies, the lake floater occurs primarily in lakes, and is North America's only obligate lake mussel.  It occurs from the Twin Cities area to the Canadian border and appears to be fairly common.  Shells of the gulf mapleleaf were collected from the Minnesota and Mississippi rivers, but no live individuals were found.  It was apparently common in the lower Minnesota River based on the abundance of shells, but it is apparently extirpated.

The St. Croix, Minnesota, and Mississippi River main stem below St. Anthony Falls have (or had) the most diverse mussel assemblages with >40 species.  Surveys revealed that rivers in the southern one-third of the state no longer support their historical assemblages of mussel species.  Notable exceptions included Otter and Rose Creeks (tributaries of the Cedar River in Mower County) and portions of the Upper Iowa River.  In Otter Creek, eleven mussel species were present and unlike most of the other streams surveyed it appeared to support its historical complement of mussel species based on lack of empty shells.  Mussels present included a healthy population of the state threatened ellipse (Venustachoncha ellipsiformis) and the only living specimen of the state threatened mucket (Actinonaias ligamentina) found in any of the southern rivers during 1999.  Two species of Special Concern were also present.  Rose Creek supports a healthy population of spike (Elliptio dilatata), a threatened species that has declined in most of the state and is now abundant only in the St. Croix River basin.  The Upper Iowa River supported ten live species including the state threatened V. ellipsiformis and a population of elktoe (Alasmidonta marginata), a threatened species that is extremely rare in the southern one-third of the state. 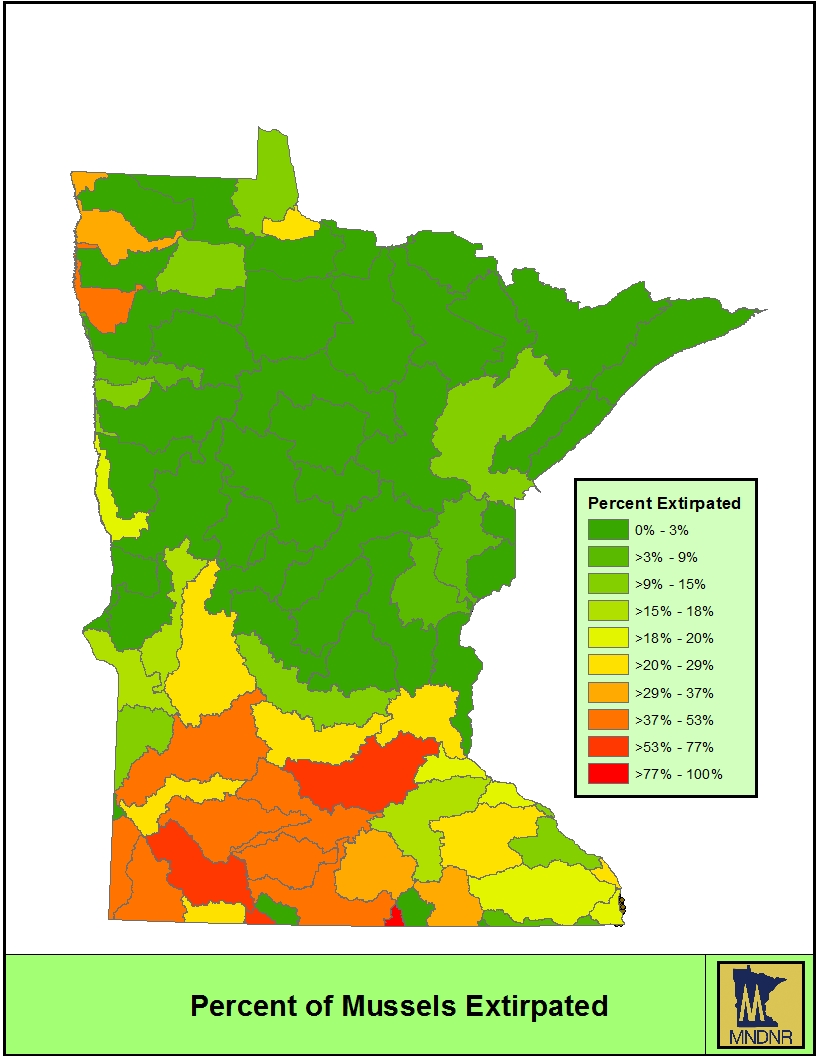 Funding for this project was approved by the Minnesota Legislature, 1999 Minnesota Laws, Ch. 23, Sec. 16, Subd15(a), as recommended by the Legislative Commission on Minnesota Resources from the Minnesota Environment and Natural Resources Trust Fund.

Project started in July 1999. $200,000 the first year and $200,000 the second year are from the trust fund to the commissioner of the DNR for the first biennium of a three-biennium project to survey mussels statewide.

Since 2001 the surveys have been largely funded by the State Wildlife Grant program with matching state funds provided from several sources over the years.