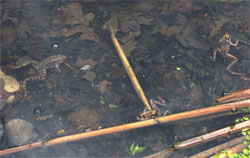 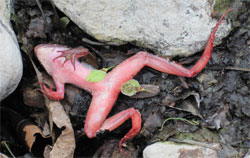 Reddening of skin along the ventral surface of the body, legs, and feet of frogs is often associated with disease. In this case, this Northern Leopard Frog tested positive for chytridiomycosis.

A number of diseases and malformations are affecting both reptiles (turtles, snakes and lizards) and amphibians (frogs, toads, and salamanders) around the world and in some cases in Minnesota. Many of the species involved in die-offs are fairly common and widespread in the United States, but some are either declining in number or are already threatened or endangered. Many of the symptoms for these diseases are “non-specific” that is, the symptoms for various diseases can look similar and in some cases, only dead animals may be found. For these reasons it is not possible to diagnose these diseases with the naked eye and laboratory testing is required. There is some basic information about some of the more common diseases below with links to additional information. In addition, large die-offs during winter ("winterkill") or early spring are a natural phenomenon affecting fishes, turtles and/or frogs, and is not necessarily associated with disease.

Many wildlife diseases are tracked through the National Wildlife Health Lab (NWHL) and the Lab currently has an Amphibian Research and Monitoring Initiative. Much of the information below is from NWHL and Amphibian Ark.

Studies have shown that the range, complexity, and recurring patterns found in hind limb malformations in frogs at several different locations suggest that both site-specific and time-dependent influences contribute to the development of these malformations. Researchers have identified four major causes of malformations to date:

The current rates of malformation far exceed what can be considered “normal”. Malformations can lead to death through starvation or predation by other species. While anatomical deformities are a natural phenomenon within virtually all species, the recent widespread occurrence of these deformities and the relatively high frequency of malformation within local populations concerns wildlife biologists. To learn more about how parasitism influences amphibian malformations, visit The Skelly Lab's webpages.

Species Affected & Distribution: Over 50 species of frogs, toads, and salamanders in 44 U.S. states (including Minnesota) have been reported with malformations.

Description: Chytridiomycosis is the disease that occurs when an amphibian is infected with a particular species of chytrid fungus. There are approximately 1,000 different chytrid fungi that live exclusively in water or moist environments. In 1999, a new species of chytrid fungus was described that infects the skin of amphibians and was named Batrachochytrium dendrobatidis or “Bd”. Bd is the only chytrid fungus that parasitizes vertebrate animals, specifically amphibians. This disease causes changes in the skin that are deadly to amphibians, because they rely on their skin for the absorption of water and electrolytes. An amphibian that is sick with chytridiomycosis can exhibit reddened or discolored skin, excessive shedding of skin, and abnormal postures, such as a preference for keeping the skin of the belly away from the ground. Unnatural behaviors, such as a nocturnal species that are active during the day, or seizures are common. The International Union for Conservation of Nature (IUCN) has called amphibian chytridiomycosis, “the worst infectious disease ever recorded among vertebrates in terms of the number of species impacted, and its propensity to drive them to extinction.”

Host Species & Distribution: All amphibian species are susceptible to infection by Bd. Not all amphibian species that are infected become sick or die. Some species, like the American bullfrog, are known to be “resistant” to chytridiomycosis, and end up being carriers, or hosts that can move the fungus to new locations exposing amphibians in those areas to the fungus. Since its discovery, Bd has been found in wild and captive amphibian populations on every amphibian-inhabited continent with the exception of Madagascar, Borneo and New Guinea where the fungus has not been detected to date. Learn more about Chytrid Fungus.

Description: Ranavirus is a type of iridovirus (e.g., a DNA virus) that causes systemic infections in amphibians, reptiles, and fishes. Multiple strains exist, each with varying degrees of virulence depending on the species infected. Because larval amphibians are particularly susceptible to this virus, die-offs are often detected in spring and summer when many species amphibian larvae are most prevalent. This virus can cause a sudden onset of illness (disease) in amphibians in a wetland, often with hundreds or thousands of sick and dead amphibians found in a short period. Overall mortality rates in juvenile frogs and salamanders in a wetland can exceed 90%. Affected individuals usually have subtle to severe hemorrhages in the ventral (belly) skin, especially at the base of the hind limbs and around the vent opening. Other symptoms include lethargy, swimming erratically, weakly, or on their sides, and mild to severe fluid accumulation under the skin of the abdomen and hind limbs. Turtles with ranavirus infection show weakness, swollen eyelids, discharge from the nose and mouth, and the tongue and palate may show dull white or thick yellow plaques. Die-offs have ranged from one to thousands of individuals.

Host Species & Distribution: According to the USGS, die-offs have occurred in over 25 states involving more than 20 species of turtles and amphibians. Mortality events due to ranaviruses occur most commonly in mole salamanders (Ambystoma spp.), true frogs (Lithobates spp. and Rana spp.) and chorus frogs (Pseudacris spp.), and less frequently in adult newts (Notophthalmus viridescens), adult treefrogs (Hyla spp.), post-metamorphic Columbia spotted frogs (Lithobates luteiventris), eastern box turtles (Terrapene carolina carolina), and true tortoises. Amphibian ranaviruses are likely present in every state with the possible exception of Hawaii, however, little is known about the distribution, prevalence, and virulence of differing strains of ranaviruses. Globally, ranavirus diseases in amphibians have been diagnosed in North and South America (including Minnesota), Europe, Asia, and Australia. Learn more about ranavirus.

Description: Salmonellosis is an infection with Salmonella bacteria and can affect amphibians, birds, fishes, mammals (including humans), and reptiles. Many strains of Salmonella exist, and not all affect amphibians and reptiles. Infections can be zoonotic (can be transferred between humans and wildlife). Contrary to popular belief, Salmonella bacteria are appear to be uncommon in free-ranging turtles (Saelinger et al. 2006, Hidalgo-Vila et al. 2008). However, these bacteria are often present on captive amphibians and reptiles, especially turtles, that are kept in confined in enclosures.

Because Salmonella bacteria occur at relatively low prevalence in wild populations of amphibians and reptiles, it is not typically of conservation concern. However, it is commonly considered a public health risk. The type of Salmonella usually associated with infections in humans, nontyphoidal Salmonella, is usually contracted from sources such as:

Description: Snake Fungal Disease (SFD) is an emerging disease in certain populations of wild snakes in the eastern and midwestern US. In recent years, the number of snakes with fungal dermatitis submitted to wildlife health labs has been increasing. This fungus is only known to affect snakes. To date, a number of mortality events have occurred, but it is not known whether there are population-level impacts. Snakes with SFD are often found with scabs or crusty scales, subcutaneous nodules, premature separation of the outermost layer of the skin from the underlying skin (or abnormal molting), white opaque cloudiness of the eyes (not associated with molting), or localized thickening or crusting of the skin. Skin ulcers, swelling of the face, and nodules in the deeper tissues of the head have also been documented. Investigations of this potentially emerging disease are ongoing by various agencies and wildlife health professionals.

Partners in Amphibian and Reptile Conservation