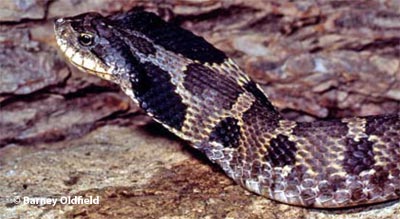 The eastern hognose snake is a medium sized snake that often startles people the first time they see one. However, this common snake is not venomous and eats mostly toads. 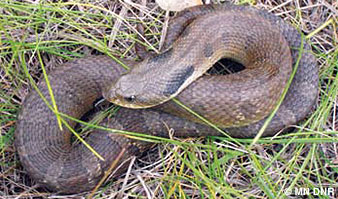 Color: Each snake is a bit different in color, ranging from yellow, gray, brown, olive and black. Some are slate gray with dark blotches behind the eyes. Others have dark brown blotches on the back.

The eastern hognose snake mates in the spring. Females deposit 15 to 25 eggs in a depression under rocks or logs or in sandy soil. Eggs deposited in June or July hatch in August and September.

Toads are the primary food of the eastern hognose snake. This snake also feeds on frogs, salamanders and small mammals. It has large teeth in the back of its mouths to puncture inflated toads to make them easier to swallow.

Eastern hognose snakes live on sandy soils near open woodlands or forest edge. This species is found in the eastern third of the Minnesota.

Hognose numbers appear to be stable, though the DNR does not conduct official counts. Many of these harmless snakes are killed by people who believe they're poisonous. Eastern hognose snake numbers often decline in areas where there is much development such as highways and houses. 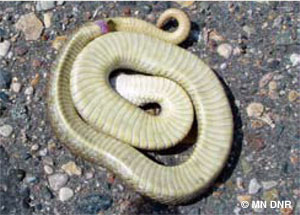 When frightened, hognose snakes coil and flatten their heads and necks two to three times their normal width. Hissing loudly, they strike repeatedly. This is considered a bluff. If the feared predator does not retreat, the snake often rolls over on its back and plays dead.