The western fox snake is a large snake with big, dark blotches. It is found mainly along the St. Croix, Mississippi, and Minnesota rivers. The western fox snake doesn't look anything like a fox. It got its name because when it is handled it gives off a musky odor similar to that of a red fox.

General description: This long snake has large, dark splotches on most of its body and dark rings on its tail. In young western fox snakes, the head has a black line from the eye to the jaw, and another across the top between the eyes. Western fox snakes do not have rattles.

Size: Fox snakes can reach over 5 feet in length. It is among Minnesota's longest snakes.

Sound: Although it lacks rattles, the western fox snake can make a rattly sound when it shakes its tail. It also may hiss when threatened.

A western fox snake eats mice, birds, frogs, and other small animals. It kills its prey by wrapping around it and squeezing it to death. 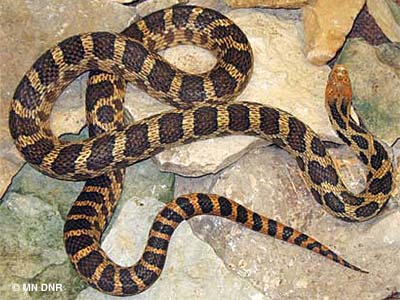 Western fox snakes live in forest edge habitats. They are often found along forested edges of our larger rivers. They are not common in urban areas but are found around farms and houses in rural areas. This snake usually won't come into a house, but can be found in sheds, barns, or other buildings where rodents are present.

The western fox snake does not have special status in Minnesota, which means its population is likely doing fine.

Western fox snakes tend to be active during daytime in the spring and fall. During the summer, they may be active at night. They can swim and climb. Although they don't have rattles and aren't venomous, people often confuse them with rattlesnakes because they sometimes will shake their tails, hiss, and strike when threatened.