The call of the western chorus frog, may be heard in spring or after a rainfall in many parts of Minnesota. If you track it to its source you will find a small, dark frog.

Although it is small and hard to see, if you listen, you can hear it calling in a variety of habitats including shallow wetlands in farm fields, woodlands or in the cities.

Color: Skin color ranges from tan to shades of gray or red. Three dark stripes extend from the head down the back and an additional line runs through the eye. A white line extends along the upper lip.

Sounds: The call of the western chorus frog is a rising creeee that sounds like a fingernail being dragged across a comb. 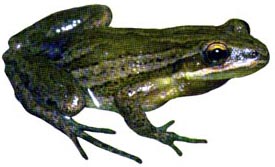 Western chorus frogs begin breeding in March and April. Females attach clumps of up to 100 eggs to vegetation. The eggs hatch within 18 days, depending on water temperature. The tadpoles turn into frogs within 90 days after hatching.

Western chorus frogs are found throughout Minnesota. They like open habitats such as wetlands and fields near trees, but they can also live in cities. These frogs breed in shallow water such as temporary wetlands and ditches. They overwinter under rocks and logs near their breeding ponds.

Summer habitat: Associated with a variety of habitats, including urban environments, but often found in grasslands or forest edges.

Western chorus frogs have no special status in Minnesota.

The western chorus frog is Minnesota's smallest frog. The world's largest frog, the giant frog of Africa, can grow to be almost 12 inches long.