Species of lakes and streams

Temperature, rainfall, and vegetation greatly influence where toads and frogs live and how active they are. Their permeable skin and cold-blooded nature make them sensitive to moisture and temperature extremes. Each species is adapted to live in one or more habitats where it can find food, breeding sites, and protection from the extremes of weather and temperature.

1)Toad and frog eggs are laid in the shallow water of a flooded field, wetland edge, or stream backwater. They hatch into larvae (tadpoles) which are entirely aquatic and primarily herbivorous. Tadpoles eat large quantities of algae and plankton, which grow rapidly in the rich nutrients transported to the wetlands by spring rains.

During metamorphosis, a change from the larval stage to adult, tadpoles lose their internal gills and tail and develop lungs and limbs. This remarkable transformation turns the previously aquatic vegetarian into an air-breathing, carnivorous toad or frog that eats primarily insects. For Minnesota species, this transformation may take from less than two months to more than two years. Development is quickest in species adapted to breed in shallow, temporary wetlands. Although species that breed in these temporary waters benefit from having few predators such as fish, they can suffer if the water dries up before the transformation is complete.

After metamorphosis, anurans emerge onto land, sometimes traveling long distances to reach suitable habitats. Some species can be found in a wide variety of habitats such as woodlands, grasslands, and even urban yards and gardens. Most of these species are widely distributed in the state. Other anurans seek out a specific type of habitat, such as the pickerel frog which inhabits cool, forested streams of southern Minnesota. These species are found only in certain parts of Minnesota, and their distribution may coincide with particular vegetation zones. 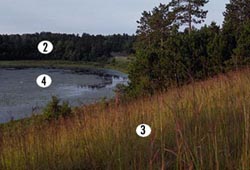 2) After metamorphosis, woodland species, such as the spring peeper and wood frog, emerge from temporary forest ponds and feed on insects in nearby trees and shrubs or on the forest floor.

3) Grasslands or wet meadows are preferred by species such as the great plains toad and the northern leopard frog.

4) Highly aquatic species, such as the green frog and mink frog, spend most of their adult lives in water. After metamorphosis, they move through forests and grasslands to reach nearby lakes or streams.