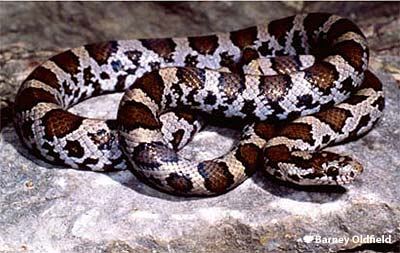 This nonvenomous, medium-sized snake is found mainly along the Minnesota, Mississippi, and St. Croix rivers, in open places that have rocky outcroppings. Although it may come in many color combinations, it always has black outlines around its blotchy markings.

General description: This distinctively marked snake is covered with blotches that range from reddish-brown to grayish-brown. The blotches are outlined with black.

Color: In general, the milk snake has a light background with brown, rust, or other color spots. The markings have black outlines. A light gray Y- or V-shaped pattern is located on the back of the neck.

Sounds: The milk snake hisses and shakes its tail when it is threatened. This may cause some people to confuse it with a rattlesnake. 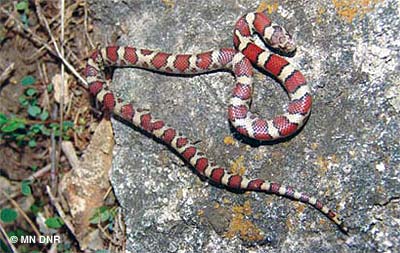 Milk snakes mate in spring or early summer. The female lays 8 to 12 eggs, which hatch in 6 to 9 weeks. The newly hatched young are 6 to 10 inches long.

Milk snakes eat a wide variety of food: rodents, birds, eggs, and lizards. They eat other snakes, including poisonous ones. They suffocate their prey by squeezing it, then swallow it whole.

Coyotes, skunks, raccoons, foxes and birds of prey all will eat milk snakes.

Milk snakes are found near forests in open land. They often hide around barns and other buildings where mice and other prey are found. They are very elusive. In the spring and fall they are active in the day, but in the summer they do most of their traveling at night.

Milk snakes have no special status in Minnesota.

The milk snake earned its name through folk legend. People thought it sucked milk from cows.